Uzbekistan & China: Friends in a Time of Need 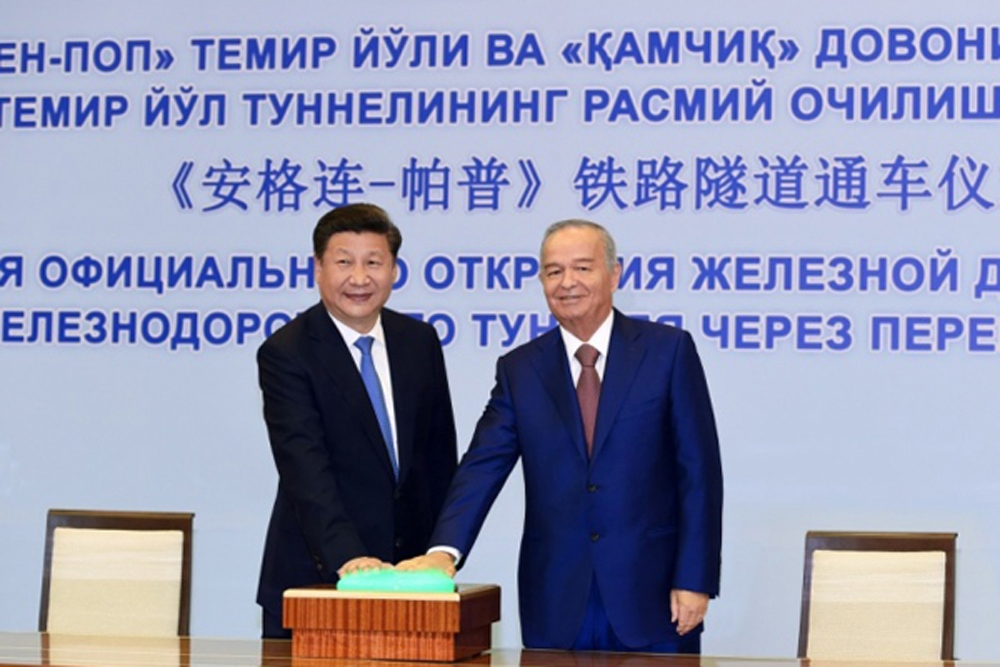 Uzbek President Islam Karimov and Chinese President Xi Jinping at the opening ceremony on June 22 of a 19.2-kilometer, $455-million railway tunnel in Uzbekistan. The tunnel is the biggest Chinese-led project ever completed in the region. China last year became Uzbekistan’s largest trading partner with $3 billion worth of trade done, leapfrogging Russia in the process. (Photo: Uzbek Presidential Press Service)

Forth of a Five-Part Series

Deputies in Uzbekistan’s parliament burst into regular rounds of enthusiastic, standing applause as they listened to a speech by Chinese President Xi Jinping.

Xi’s address on June 22 was the first ever given by a foreign leader in the Oliy Majlis.

“A new era of strategic Chinese-Uzbekistan partnership has begun. Both nations should stand side-by-side to unlock new opportunities for cooperation,” he said.

When Uzbek leader Islam Karimov spoke — in Russian, so his words could be translated more easily — there was palpable warmth in his voice.

“I want to tell you that we have a proverb: ‘You know a friend in times of hardship.’ China is indeed such a friend that has lent a hand at a difficult time,” Karimov said.

Karimov did not spell out the current hardships, but they are known by most households in Uzbekistan. While the government has pretended the economy is still enjoying bouncing health, there are many hints all is not so rosy. Recent Russian Central Bank figures showed that remittances sent home by Uzbek workers in Russia dropped to $256 million in the first quarter of this year, as compared to $910 million in the same period in 2014.

Uzbekistan has tried since independence to plot a course to maintain diplomatic equidistance from all its international partners out of fear of having to rely too much on any single one of them. Recent years, however, have seen a strong tilt toward Beijing.

China last year became Uzbekistan’s largest trading partner with $3 billion worth of trade done, leapfrogging Russia in the process. That was actually lower than in 2014, when the figure was $4.7 billion, but with Russia’s economy enduring an extended slump, the trend is unmistakable.

On the same day as the speeches in parliament, Xi and Karimov participated in a ceremony marking the opening of a 19.2-kilometer railway tunnel that will join Uzbekistan’s populous Ferghana Valley with the rest of the country. The tunnel is the largest of its kind anywhere in Central Asia and is also the biggest Chinese-led project ever completed in the region.

China Railway Tunnel Group completed the project in May at a cost of $455 million. The tunnel is part of the 124-kilometer Angren-Pap line, which should eventually be linked into a network passing through Kyrgyzstan and into China.

There is an irony here in that the Angren-Pap route is being built so Uzbekistan can stop relying on an existing Soviet-built section of railroad that passes through Tajikistan. Tashkent and Dushanbe have long had a testy relationship. But creating transportation links with China requires double-landlocked Uzbekistan to increase connectivity with Kyrgyzstan — another problem neighbor.

Such instances of grand cooperation tend to paper over the nuances, however. Beijing’s appeal to Tashkent lies first and foremost in its ability to offer investment and technology with little or no political strings attached.

“Our friendship is built only on economic projects and within the framework of regional groups like the Shanghai Cooperation Organization. I would call this a tentative partnership. On the one hand, there is a desire to trade, on the other, Uzbekistan is worried about excessive proximity to China,” said political analyst Anvar Nazirov.

As in other countries of Central Asia and elsewhere, China has pursued a tentative soft power strategy in Uzbekistan. In 2005, it opened its first local branch of the Confucius Institute — the overseas Chinese culture-promotion organization that is an equivalent to the British Council or Germany’s Goethe-Institut. The institute has a reasonably robust following and provides scholarships for Uzbeks looking to study in China. Graduates from Chinese universities typically end up working in Chinese companies, so Uzbekistan is like its neighbors, bereft of dependable China specialists in academia.

Since Uzbek media is more strictly policed than in Kazakhstan or Kyrgyzstan, which have both seen voluble displays of Sinophobic sentiment, the strength of public attitudes toward China have been heavily attenuated.

“Uzbeks are diffident in their attitude toward Chinese, particularly in the provinces among believers, who regard them to be alien on a religious level,” Nazirov said.

Nazirov said that if there is one point of contention though, it is over the fact that Uzbekistan exports large amounts of natural gas to China, leading to shortages among households in the cold winter months.

Still, symbolism in international relations counts for a lot. As is his custom, Karimov snubbed May 9 anniversary celebrations in Moscow commemorating the end of World War II. But in September, he paid a trip to Beijing to mark the same historical event.

“Uzbekistan doesn’t use the term Great Fatherland War (as in Russia). Instead they use World War II,” said Maxim Matnazarov, an Uzbek historian based in Moscow. “From an ideological viewpoint, the Chinese victory parade matches the position on the war adopted by Uzbekistan.”

According to a translator at a company working on the Angren-Pap railroad, jobs created at their project have been equitably distributed, minimizing potential for disgruntlement among Uzbeks.

“Out of the 1,500 or so railroad workers, around half are Uzbek laborers and technicians. The government likes the Chinese because most of them are atheists, unlike the Turks who get involved in religious propaganda. The Chinese need nothing here but business,” the translator, whose name has been withheld, told EurasiaNet.org.

The government provides no transparent labor data, or even figures about how many Chinese laborers actually live and work in Uzbekistan, so it is anybody’s guess if that picture is the same across the board.

Even if China is doing much of the running and Russia is gradually losing what hold it has in Uzbekistan, Tashkent has made efforts to also draw in other big international partners.

One key event came on May 21 with the opening of Central Asia’s largest chemical processing plant at the site of the Surgil gas field in northwestern Uzbekistan. The $4 billion complex was developed jointly with South Korean companies and will be able to refine 4.5 billion cubic meters of natural gas annually.

“The Surgil project is a new symbol in the development of the friendship between our two nations and a locomotive for economic cooperation,” Mirziyoyev said. “The Uzbek government will provide full support for all projects involving South Korean companies.”

Observers say Tashkent will need more of that to maintain balance among suitors.

“As long as Tashkent pursues it security policy of diversifying links, it will regard China, South Korea and other countries on the same level. For Uzbekistan, China is first and foremost money,” Matnazarov told EurasiaNet.org.