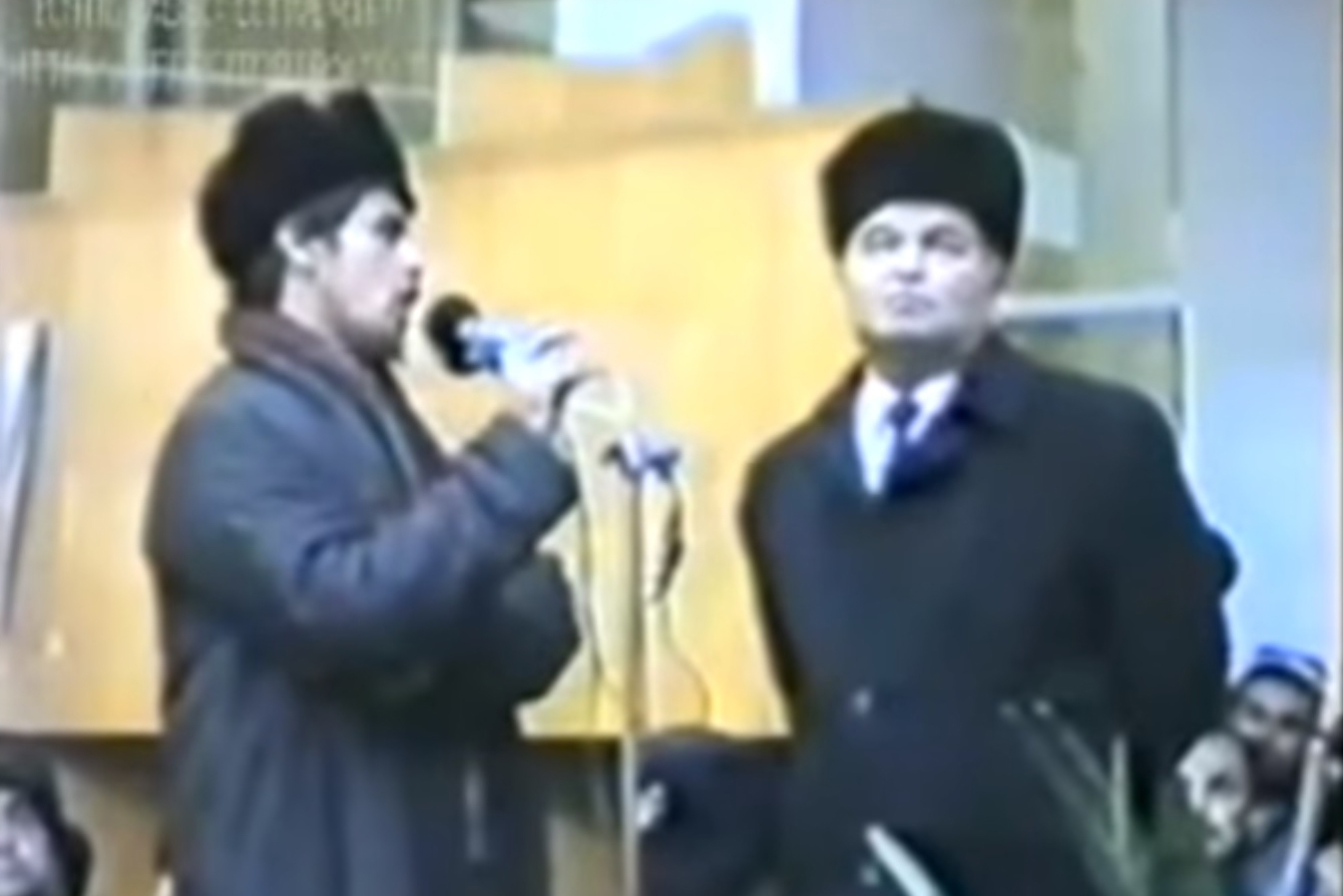 Namangan, a city in Uzbekistan’s portion of the Ferghana Valley, was aflame last month. Bursts of gunfire punctured the air. A bus was set alight. Led by two fierce-eyed young men – Tahir and Juma – a mob shouted “Allahu Akbar!” and demanded vengeance against the authorities.

Many Namangan residents seemed shocked. Such spasms of discontent had not been seen in the city in decades. But this was no sudden outburst of pent-up frustration. It was the filming of a scene from a soon-to-be-released feature film titled “Sacred Desire.” The movie depicts decades-old events and the lives of militant Islamist leaders Tahir Yuldashev and Juma Namangani.

The telling of their story fits into a recent trend of cinematic morality tales produced by Uzbek authorities in an effort to discourage young people in present-day Uzbekistan from falling into the clutches of religious extremists.

The residents of Namangan are conflicted about the movie, which filmed on locations around the city in July.

Robiya, a 48-year-old trader at Chorsu market, not far from where filming took place, was perplexed about the need to rake up the past. “We have already begun forgetting about it. Young people born after the 1990s don’t know a thing about Juma and Tahir. I can barely remember those events. Our city is now peaceful and calm. I will not be watching this movie,” Robiya told EurasiaNet.org.

But younger people like 23-year-old Akram are more enthusiastic and proud that a high-profile movie is being filmed in their city. “This movie is a kind of warning. Many people don’t understand anything about Islam. Tahir Yuldashev poisoned the minds of young people with heresies,” said Akram, a teacher at a Namangan school.

Yuldashev’s and Namangani’s first brush with conflict came during the Soviet military occupation of Afghanistan. The experience caused the pair to embrace radical Islamic ideas, and when they returned to their native Namangan, they saw their moment to act on their beliefs during the collapse of the Soviet Union in the early 1990s.

According to a narrative espoused by incumbent authorities, KGB officials and Communist Party apparatchiks mismanaged the religious awakening that coincided with the Soviet implosion, enabling radicals like Yuldashev and Namangani to gain prominence. And as Uzbekistan’s economy experienced a meltdown, events quickly became volatile.

By December 1990, a dark and violent mood had descended over the city, punctuated by an incident in which five off-duty Soviet Interior Ministry troops were killed at the hands of a mob in center of the city.

According to an account published by the Soviet newspaper Komsomolskaya Pravda, and headlined “Namangan’s Rotten Apples,” the killings were a reprisal for the soldiers’ alleged (and imagined, as the newspaper had it) manhandling of a local woman.

News reports at the time said that four soldiers were trapped inside a bus and burned alive. A fifth was severely beaten and succumbed to his injuries the following day. Local officials said the mob was composed mainly of boys in their late teens.

Yuldashev and Namangani attracted a considerable following under the uncertain economic circumstances. There is no document that better illustrates the rise of the radical Islamic sentiments than the remarkable video footage filmed in Namangan in December 1991 that shows Yuldashev verbally browbeating a stony-faced President Islam Karimov before a massive crowd of supporters.

Karimov’s reprisals for that humiliation were merciless and continue to this day. Yuldashev and Namangani were driven into exile, initially to Tajikistan, where they joined ranks with the armed Islamic opposition in that country, which had descended into civil war in 1992. Once Tajikistan’s conflict wound down, the pair refocused their attention on their home country and founded the Islamic Movement of Uzbekistan with the goal of toppling Karimov. Both would eventually be killed in US airstrikes in Pakistan and Afghanistan following the 9/11 terror attacks in the United States.

The director of “Sacred Desire,” Hilol Nasimov, has carved out a career as the creator of some of Uzbek cinema’s most ideologically pro-government movies. His credits feature movies heavy on the need to abide by a moral code as preached by the state. Nasimov has never given interviews to foreign media, but talks regularly to local outlets.

“With this movie, I want to show how our independence was formed. These were difficult times when various extremist religious organizations came out into the open and wanted to create a caliphate,” Nasimov told Podrobno.uz news website ahead of filming on “Sacred Desire.”

Shukhrat Abbasov, a veteran filmmaker described as the father of Uzbek cinema, told EurasiaNet.org that the production of movies like “Sacred Desire” might be politically motivated, but that their existence is justifiable. “Considering what is happening in Syria and Afghanistan, this topic is very relevant. The main thing is to produce good and well-crafted cinema, and not just a poster,” said Abbasov, director of the seminal 1967 movie “Tashkent – City of Bread.”

Film critic Aziz Matyakubov said Nasimov’s movie should be read as a call to caution. “The movie is about the dramatic 1990s, when our country was taking its first steps toward independence. For us young people it is interesting to understand the hearts and thoughts of people at that time. From a historical perspective, this will be a very valuable movie,” Matyakubov told EurasiaNet.org.

According to a person close to Nasimov, “Sacred Desire” has cost around 1 billion Uzbek sum ($320,000 at the official exchange rate and $166,000 at the unofficial rate) to produce, putting it at the higher end of the budget range for local productions. Average movie budgets in Uzbekistan typically range around $10,000 to $50,000, according to industry insiders. Some 80 movies are produced in Uzbekistan every year — around 10 with government funding.

Nasimov’s movie comes on the heels of a similarly toned 2015 blockbuster, “Traitor.” That movie was a largely fictitious recreation of events in the run-up to the bloody unrest in the city of Andijan in 2005, which was ruthlessly put down by government troops. Again, the lesson there was clear: Good intentions can be cruelly exploited by wicked people setting helpless victims up for a fall.

“Sacred Desire” is slated for release on September 1, ahead of celebrations to mark the 25th anniversary of Uzbekistan’s independence.