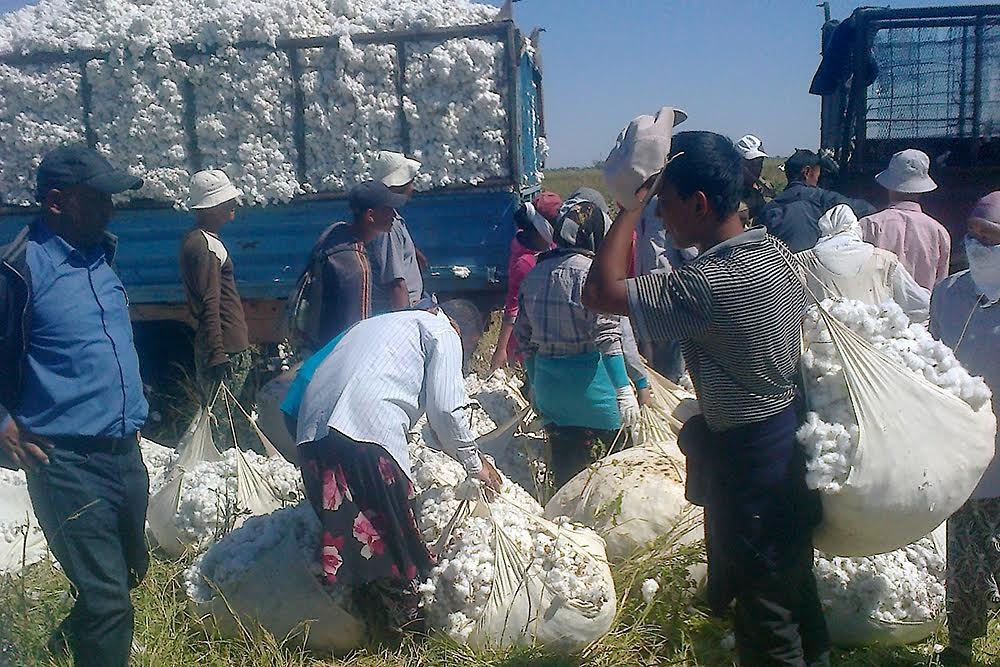 Uzbekistan has pledged more transparency in a cotton industry blighted by a reputation for relying on child labor and press-ganging of unwilling individuals. Yet, authorities are hounding those trying to determine whether the government is keeping its word.

Doctors, teachers and even pop stars are among the hundreds of thousands of citizens believed to have been forced into the fields this year. But documenting the scale of the problem has been tough.

“We constantly experience problems with the security of people conducting forced labor monitoring, [but this year] has been the hardest in terms of searching for information,” Umida Niyazova, director of the Uzbek-German Forum for Human Rights, told EurasiaNet.org by e-mail from Berlin.

Monitors risk physical intimidation, arrest and petty harassment, while those involved in the work are urged by officials to keep prying eyes away. “Many [Uzbek] organizations are warning staff not to talk to outsiders. Farmers must make calls [to officials] if they see strangers in their fields,” Niyazova said.

In late September, veteran activist Elena Urlaeva was arrested for the second time in the space of a month while trying to monitor the harvest in the western Khorezm province, where she found ample evidence of forced labor.

Police threatened her not only with criminal charges but also with “disappearance in the desert” and “poisoning with rat poison,” Urlaeva told EurasiaNet.org by e-mail in early October. The 58-year-old activist was previously arrested on September 19 while documenting forced labor around Tashkent. On that occasion, police hauled in her 11-year-old son for interrogation and accused a local farmer of espionage.

In May, Urlaeva said she was detained while documenting the mobilization of doctors and sexually abused in custody.

“If the government is serious about eradicating forced labor, it needs to send a clear message to police and local officials to allow independent monitors to work without interference,” said Steve Swerdlow, a researcher for Human Rights Watch.

The World Bank, which operates projects in Uzbekistan’s agricultural sector, and the International Labor Organization (ILO) have both expressed unease over reports of monitors being harassed. Kari Tapiola, special adviser to the ILO’s director general, told EurasiaNet.org that “any action involving violence or unjustified detention in such cases is not acceptable.”

“Competent authorities should investigate such allegations in an independent manner to ensure that citizens' rights are not violated,” Tapiola said.

Those protestations are too muted for some watchdog activists. “They have a responsibility to speak out publicly about this ongoing crackdown and be willing to put Tashkent on notice that their cooperation and considerable investments are at risk if Uzbek authorities continue to deny citizens their fundamental rights,” Swerdlow said.

In a new development, the ILO is for the first time this year itself monitoring the harvest for instances of adult forced labor. It is deploying teams in 10 out of Uzbekistan’s 12 provinces, in areas that accounts for up to 80 percent of the country’s cotton output.

An ILO mission in 2013 was limited to checking for evidence of child labor, which the organization claims as a contributing factor toward an important breakthrough. “The identified child labor cases [in 2013] have helped achieve a situation where by and large under-18-year-old children are [now] not involved in the harvest,” Tapiola said.

There is broad consensus that international pressure and cotton boycotts by big-name retailers have succeeded in compelling Tashkent to all but eradicate child labor from the harvest.

But that only appear to have increased the burden on Uzbekistan’s adult population to provide free labor. Activists estimate that around a million people are made pick cotton every year. Many of those people are public-sector workers, including doctors and teachers. As a result, essential public services, in particular education and health care, experience drastic interruptions during the harvest season, according to the Uzbek-German Forum for Human Rights.

The BBC reported that even pop stars were among those forced to work in the fields this year. One singer reportedly lost his performing license in 2013 for refusing to pick cotton.

“In terms of methods, degree, and scale of coercion, [this year] in no way differs from previous years,” said Niyazova, whose organization has catalogued a litany of forced-labor cases this fall. “The only difference is the authorities are pretending that a mass khashar – people going out voluntarily to pick cotton – is underway.”

Tashkent has set the ambitious goal of fully mechanizing the harvest by 2020 to eliminate the need for manual labor altogether. But in the meantime, “the root of the problem remains unresolved,” said Niyazova.

The state, enjoying a monopoly, offers farmers artificially low prices for raw cotton, then turns around and sells it abroad at international market rates. In many cases, farmers and pickers earn just enough to subsist.

And campaigners say there are also possible indications that international organizations that are meant to be addressing these issues are failing to assist in upholding standards. Moscow-based website Fergana News reported in September that it found forced laborers toiling in cotton fields in an area where the World Bank is running one of its projects.

A World Bank representative told EurasiaNet.org that the project in question has not yet started and is unrelated to cotton farming. The project contains standard provisions prohibiting participants from using child or forced labor, and monitoring mechanisms have been put in place, the bank representative said. Farmers will receive awareness training, and anyone found in breach of the ban on forced labor will have their loans terminated, the World Bank said.

“The World Bank does not condone forced labor in any form and takes seriously the reports of such practices in the cotton production system of Uzbekistan,” the bank stated.

Still, the World Bank in January acknowledged a “residual possibility that there can be child and/or forced labor on farms receiving project support” in Uzbekistan. It declined a request to launch a formal probe into whether its projects contribute to forced and child labor.