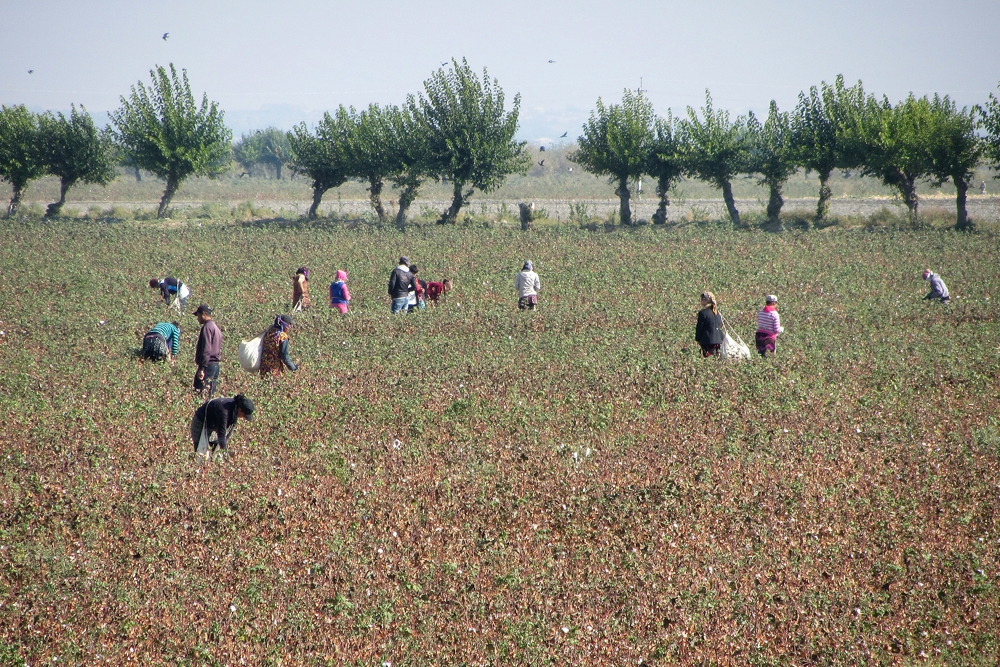 People picking cotton in 2014. The use of forced labor has been a regular feature of cotton harvests in post-Soviet Uzbekistan, but in mid-September, the Uzbek government recalled school children and state workers from the fields and vowed to end the practice. (Photo: Matthew Goulding via Flickr, CC BY-NC-ND 2.0)

Just as the annual cotton-picking season entered its most intense phase in mid-September, the government made a surprise announcement to recall students and state workers from the fields.

Shortly before midnight on September 21, Prime Minister Abdulla Aripov held a Cabinet meeting in which he instructed officials to implement a government decree, apparently adopted over a month earlier, to put a stop to forced labor for the harvest. Reporting on the news, Tashkent-based website Gazeta.uz quoted directly from the decree.

“It is categorically forbidden to forcibly deploy anybody under the age of 18, as well as workers in the educational and health sector, during the 2017 cotton harvest,” the document, approved on August 8, stated.

The use of forced labor – mostly state-sector workers and students – has been a regular feature of cotton harvests in post-Soviet Uzbekistan. The practice in recent years drew widespread criticism from Western governments and watchdog groups, especially the use of school-age children in the cotton fields. It was also a source of massive disruption for schools and some basic social services.

Within hours of Aripov giving his command, busloads of students and civil servants were reportedly being brought back home from the cotton fields.

“They woke us up at 3 am and announced we were going home,” one student told Gazeta.uz. “At five, we were already in Navoi (a city 470 kilometers west of Tashkent) and now we’re back in class.” Similar stories came from students in the Kashkadarya region.

Beyond the government’s possible concerns about conforming to basic human rights practices, a student from Navoi who got in touch with RFE/RL’s Uzbek service, Radio Ozodlik, speculated that the motive behind the decision was that a delegation of European observers was expected to travel to Uzbekistan imminently.

“The authorities are afraid, that is why they dispatched the students to the cotton fields in secret. But what was all this in aid of?” the student wrote.

Those skeptical of the government’s sincerity on this matter question why it was that the authorities had until last week failed to properly implement its August 8 decree.

Umida Niyazova, head of the Uzbek-German Forum for Human Rights, speculated that the demobilization may have been prompted by comments about forced labor made by the president of the World Bank, Jim Yong Kim, in discussions with Uzbek President Shavkat Mirziyoyev on the sidelines of the UN General Assembly.

A World Bank statement issued on September 20, after the meeting between Kim and Mirziyoyev, indeed suggested that this encounter proved a turning point.

“Kim recognized progress in eliminating systematic child labor, but he also stressed that ongoing comprehensive efforts to end adult forced labor must produce similar strong and rapid results. President Mirziyoyev expressed his commitment to end all forms of forced labor and provided a guarantee that as president he would ensure unannounced and unaccompanied visits by International Labor Organization monitors across Uzbekistan,” the statement said.

Niyazova said that international rights organizations have for many years been lobbying for the World Bank to take a stronger line on forced labor and to make ongoing financial assistance conditional on Uzbekistan’s compliance with global norms concerning child labor and basic rights.

“The World Bank was strongly resistant. They invested in Uzbekistan, even when there was mass child labor. Ten years ago, they were not especially concerned by the situation. They have only started to talk now, after suffering blows to their reputation,” Niyazova told EurasiaNet.org.

With international pressure apparently making itself felt, Mirziyoyev even went so far as to mention the issue of forced labor in his September 19 address to the UN General Assembly.

The cotton-harvest demobilization generated a wave of happy reactions on social media websites in Uzbekistan. A news report published by the Uzbek-language website Kun.uz generated more than 300,000 views – a vast amount by local standards. But elsewhere, the website injected a note of caution, asking rhetorically; “and who will gather the cotton now?”

One proposal is that farmers can enlist the unemployed, including from the ranks of a body created by the Union of Youths of Uzbekistan – a successor to the Soviet-era Komsomol – to help jobless young people earn money by doing seasonal jobs.

This association, which features somewhat militaristically called Self-Sacrificing Youth Units, has around 51,000 members at present.

New rules are creating more incentives to get involved in the backbreaking task of harvesting cotton. On September 25, the government published a 10-day old decree detailing the amount of fees to be paid to cotton harvesters. At the start of the harvesting season, workers would be paid 450 Uzbek sum ($0.055) per kilogram of raw cotton gathered. After October 1, the fee would have to go up to 500 Uzbek sum per kilo. Payments to laborers will have to be made weekly, or even daily, depending on the circumstances, according to the decree.

Warming to the emerging rights theme, Mirziyoyev proposed during his September 18-20 visit to the United States that Uzbekistan could even host a permanent representative of the United Nations High Commissioner for Human Rights. He also suggested holding an Asian forum for human rights in the city of Samarkand.

Talking to reporters at the National Press Center in Tashkent, Akmal Saidov, head of the government-backed National Center for Human Rights, suggested that Uzbekistan aspires to put its poor rights record behind it, and strives to become a regional leader on rights issues.

“Now, Uzbekistan is not in the position of having to defend itself. Earlier they criticized, and we defended ourselves and responded. Today, Uzbekistan is coming out with [an] initiative on human rights, and not just on a national level but on a global level too,” Saidov said.

For all this euphoria, Uzbekistan’s actions are still far from meeting the hopes and expectations of watchdog activists.

Authorities, meanwhile, remain somewhat wary of foreign rights organizations. Saidov noted, for instance, that Human Rights Watch is still unable to resume its activities in Uzbekistan due to a Supreme Court decision in 2011 to liquidate the organization’s local office.

“Nobody has reversed this decision, and we have to settle this matter in legal fashion through the Justice Ministry,” Saidov told Podrobno.uz.