Critics of the station's Sardoba dam coverage say it is too upbeat and intent on covering up problems. 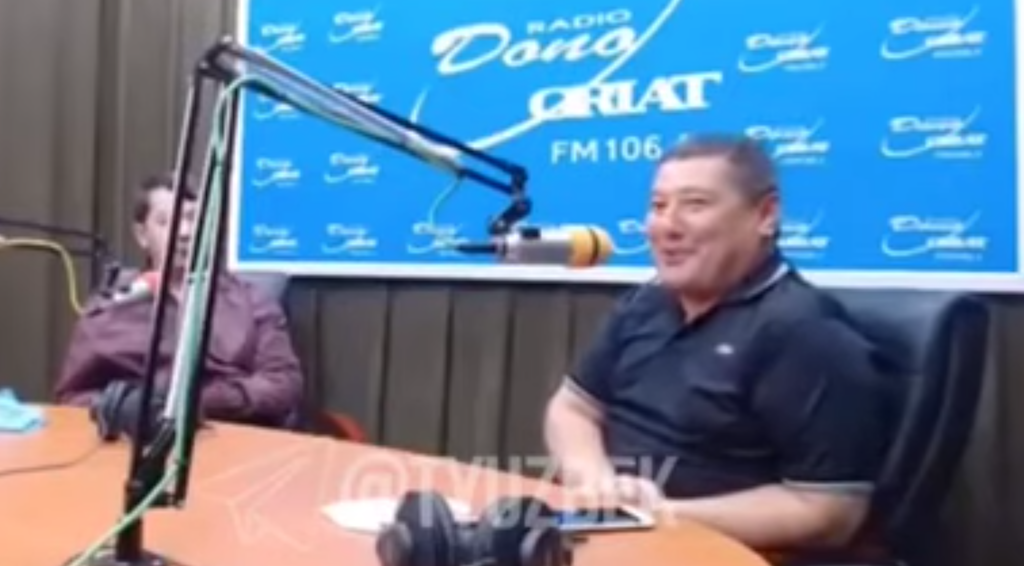 Unwise cracks: Babajanov joking during a radio program, as seen in screenshot of footage posted but later deleted by Oriat Dono radio station.

Two journalists at a popular sports television channel in Uzbekistan have been fired after speaking critically on air about how a state-run news channel covered the recent disastrous collapse of a dam near the town of Sardoba.

Bobur Akmalov and Jamoliddin Babajanov, a former editor and producer at Sport, respectively, made their remarks during a radio program broadcast on May 18.

Babajanov expressed surprise at how footage aired by Uzbekistan-24 predominantly showed jubilant residents in Sardoba, despite many of those same people having only recently lost their homes. State-run and state-loyal media indeed focus much of their coverage not on the disaster itself, but instead on rescue and relief operations. The collapse of the dam, which was built in the years that current President Shavkat Mirziyoyev was serving as prime minister, forced 90,000 people from their homes and left at least six dead.

“Watching Uzbekistan-24, I thought that Sardobans must be happy about the flood. That they were delighted by the tragedy,” Babajanov said on the radio show.

Akmalov expressed similar bemusement, saying that the people seen on television reminded him of images from North Korean propaganda.

“People whose houses are flooded should not look so happy,” he said, adding that he wondered whether they really were displaced people.

The exchange was uploaded to the radio station’s YouTube page. It was swiftly removed, but not before the footage did the rounds on social media and messaging apps.

On May 24, Alisher Khadjayev, the head of the National Television and Radio Company of Uzbekistan, condemned the remarks by the pair as besmirching the work of their colleagues.

“During their conversation, Bobur Akmalov and Jamoliddin Babajanov tried to suggest that the material and information on Uzbekistan-24 were far from the truth, that Uzbekistan-24 lives in a parallel universe, and that the situation in the country is different from what the TV channel shows,” he said.

In doing so, the journalists violated corporate ethics, said Khadjayev.

The broadcaster that Khadjayev runs includes Uzbekistan-24 and Sports in its stable of channels.

“If in the United States or in Britain, which are mentioned as examples of democracy for the rest of the world, media like CNN or the BBC were to talk critically (and even without basis) about the work of another channel within their own structure, those employees would swiftly be ‘accompanied’ out of CNN or the BBC,” he wrote.

Dismissal of the pair duly followed.

The Sardoba disaster has now landed several journalists in trouble.

On May 3, Mavjuda Mirzayeva, a reporter with an outlet called Human.uz, and her cameraman were harassed by police while trying to do interviews with dispossessed residents put up in a local college. Their footage was then deleted.

“We went there to try and find out what the mood was like, what conditions were like. But somebody didn’t appreciate the fact that we were doing interviews with people,” Mirzayeva told Eurasianet in the days after the incident.

Another journalist, Anora Sodykova, worked for state-run news agency Uza.uz until earlier this month. When she went to Sardoba, she was taken aback to find all the local residents she quizzed about their situation cheerily responding that all was well. Upon probing further, Sodykova learned that residents had been warned by local administration officials to refrain from complaining to journalists about their plight.

When Sodykova got back to Tashkent, she wrote up an account of what she had heard and posted it on her Facebook page. A few days later, she was fired.

The investigation into the causes of the dam collapse is being led by the security services. On May 24, the Prosecutor General’s Office said two people had been detained.

There appears little certainty that the investigation will go all the way up the chain of command.

A government commission set up to investigate the disaster includes Abdugani Sanginov, the head of a joint-stock company specializing in hydroelectric power facilities, UzbekHydroEnergo. But Sanginov was himself also closely involved in construction of the dam in the first place, prompting some to wonder how aggressively he will wish to probe.

Mirziyoyev and his family have been eager to be seen taking special care in addressing the fallout of the disaster. The president flew out to the scene on the same day the dam broke and even spent a night in the area, a highly unusual if not unprecedented thing for an Uzbek president to do in such circumstances.

More recently, Mirziyoyev’s wife and daughter traveled to Sardoba to meet with the local community for a visit that drew some waspish barbs on social media.