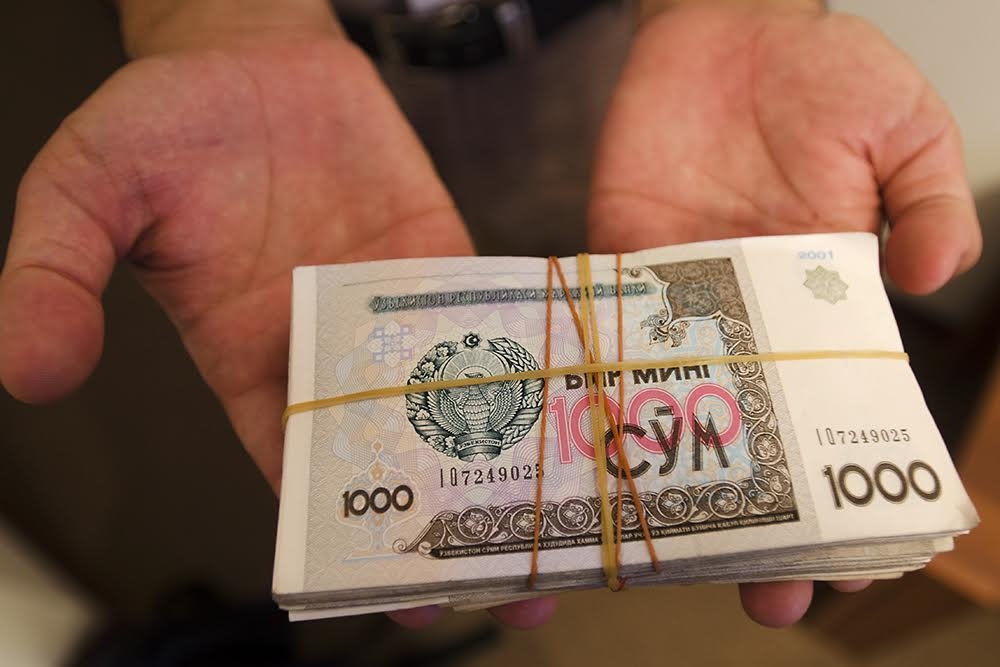 A white sedan pulls up at a busy intersection in downtown Tashkent. The driver lowers the window, a man loitering nearby approaches, the driver hands over a fistful of $100 bills, the man hands over a black plastic bag and the car pulls away.

The bag is full of sums, Uzbekistan’s currency, and the two men have just completed one of the myriad everyday transactions that fuel the country’s black market in currency exchange.

Reports of a recent crackdown on illicit money-changing notwithstanding, cash appears to be flowing freely on the black market. In Tashkent’s bazaars, illegal currency dealers stand in their usual spots, softly intoning to passersby: “Dollars, dollars, Russian rubles.”

Those looking to buy conduct a quick exchange in a quiet corner, as police turn a blind eye.

This street trade is the tip of the iceberg: most deals take place behind closed doors, with residents calling up a dealer to make arrangements to buy currency.

Uzbekistan’s black market has been unusually volatile lately, a phenomenon that observers attribute to the nosedive of Russia’s ruble and the plunge in dollar remittances from migrant workers. Since the beginning of 2015, the sum has lost some 25 percent of its black-market value, to stand at around 4,300 sums to the dollar as of June 10. The official rate stands at 2,583, having fallen by only 6 percent since January.

“The sum is worthless,” sighed one middle-aged Tashkent resident, speaking (like others interviewed for this article) on condition of anonymity. “It’s even hit over 5,000 [on the black market]!” he added incredulously. He was referring to a point in mid-May when the rate briefly hit 5,200 to the dollar.

Later in May, the rate fell back to 3,500-to-one, amid signs the authorities were intervening to drive it down. Beefed-up controls by security forces were forcing illegal currency traders off the streets, RFE/RL reported – but, as with a previous crackdown in 2013, the crackdown was fleeting and it was soon back to black-market business as usual.

Skeptics believe the sum’s late-May appreciation suggests that President Islam Karimov’s administration is able to control the illegal market if it so desires. Lending weight to this supposition are memories of the virtual (but short-lived) eradication of the black market in 2003, when rough parity existed between the two rates, making the unofficial trade superfluous.

The differential between the official and black-market rates has traditionally been around one-third, but it has widened in recent weeks to around two-thirds.

The black market keeps a vast pool of cash outside of the official financial sector. However, the official financial sector continues to receive a relatively clean bill of health from global organizations such as the International Monetary Fund. An IMF mission that visited Uzbekistan in May concluded that the banking sector was “stable, well capitalized and highly liquid.”

“As of end-March 2015, the capital adequacy ratio in the banking sector is around 24 percent and return on assets around 2 percent,” the IMF told EurasiaNet.org in a follow-up e-mail. “Liquid assets-to-short term liabilities of the banking system stand at around 75 percent, well above the minimum prudential requirement of 30 percent.”

However, there are indications that the health of the system may be illusory. In a letter leaked to RFE/RL last month, purportedly written to President Islam Karimov, a senior Central Bank official complained of a 1.5 trillion-sum ($600 million) liquidity shortfall that left banks unable to pay salaries to state entities.

That was followed by a report (published on the Uzmetronom.com website, believed by Central Asia watchers to be linked to the security services) that banking authorities had frozen currency convertibility operations, the only means by which foreign and domestic businesses can legally obtain hard currency.

The Central Bank angrily dismissed the report as an “invention” and “provocation,” and commercial banks also denied it.

Uzbekistan-based entrepreneurs say it is virtually impossible to prove or disprove the allegation, since the red tape for obtaining hard currency is such that it is difficult to discern whether the issuing of hard currency is frozen or not. According to the US government’s most recent Investment Climate Statement on Uzbekistan, official conversion procedures are excessively burdensome. “Banking regulations mandate that the currency conversion process should take no longer than two weeks, but current lag times range from three months to well over a year,” the statement said.

Local entrepreneurs complain that the official conversion procedures dent their profit margins since they cannot in practice exercise their legal right to purchase currency, forcing them onto the black market.

One small businessman operating in the hospitality trade says that in order to pay rent, which he must pay in dollars, he is forced to purchase black-market greenbacks for two-thirds more than the official rate.

Individuals also report difficulties in exercising their legal right to buy $2,000 worth of hard currency per quarter at the official rate, issued on debit cards for spending abroad (cash is not issued).

“You’re entitled to it but you can’t get it,” Tashkent resident Dilshod (not his real name), who needed dollars to travel abroad, told EurasiaNet.org. “Bank staff tells everyone who shows up that there’s a queue and you can get it in two or three months’ time. They say their [dollar-supply] limit is up.”

Existing circumstances push people into the arms of illegal moneychangers, who currently charge around 8.6 million sums for $2,000, instead of the roughly 5.2 million it would cost officially.

The system is costing ordinary citizens money, Dilshod complains, while the kingpins controlling the illicit trade, along with those who protect them, reap huge profits.