Developments since the tragedy are prompting questions about the extent to which the Mirziyoyev government welcomes real scrutiny. 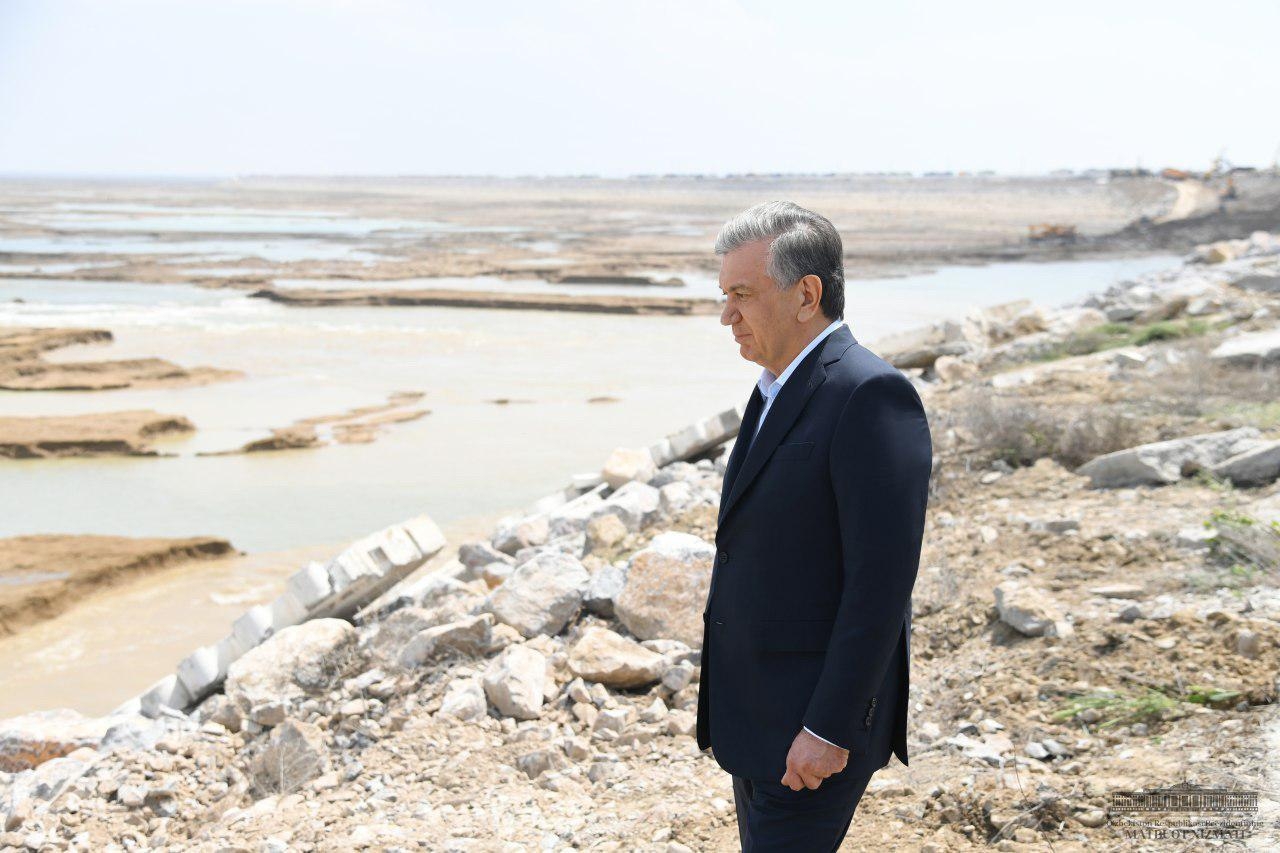 Mirziyoyev inspecting the Sardoba disaster on May 2. (president.uz)

Days after the catastrophic collapse of a dam wall near the town of Sardoba this month, President Shavkat Mirziyoyev fulminated about punishing those responsible for the disaster.

“All guilty people, regardless of who they are or what position they held, will be held to account before the law,” the Uzbek leader said on May 5.

Two days later, the government announced a commission would be created to investigate the circumstances that led to the May 1 flooding that forced 90,000 people from their homes and left at least four dead. Among the named commission members was Abdugani Sanginov, the head of a joint-stock company specializing in hydroelectric power facilities, UzbekHydroEnergo. That named raised eyebrows, since Sanginov was himself intimately involved in building the dam in the first place.

That appointment and other developments around Sardoba are prompting questions about the extent to which the Mirziyoyev government welcomes real scrutiny.

Although Mirziyoyev has previously spoken in glowing terms about the role of the press and the need for accountability, the situation with Sardoba has so far disheartened media freedom advocates. Intimidation of journalists began even as the disaster was unfolding.

On May 3, Mavjuda Mirzayeva, a reporter with an outlet called Human.uz, and her cameraman were harassed by police while trying to do interviews with dispossessed residents put up in a local college. Their footage was then deleted.

“We went there to try and find out what the mood was like, what conditions were like. But somebody didn’t appreciate the fact that we were doing interviews with people,” Mirzayeva told Eurasianet.

Another journalist, Anora Sodykova, worked for state-run news agency Uza.uz until earlier this month. When she went to Sardoba, she was taken aback to find all the local residents she quizzed about their situation cheerily responding that all was well. Upon probing further, Sodykova learned that residents had been warned by local administration officials to refrain from complaining to journalists about their plight.

When Sodykova got back to Tashkent, she wrote up an account of what she had heard and posted it on her Facebook page. A few days later, she was fired.

Sardoba reservoir is a project dating back to 2010, a time when Mirziyoyev was prime minister under then-President Islam Karimov. The task of completing construction was given to the state-owned railways company, O’zbekiston Temir Yo’llari, on account of it being one of the few companies in the country large enough to coordinate work on that scale.

The reservoir would, once completed, be 29 meters deep and hold up to 922 million cubic meters of water. Its purpose was to serve as a source of irrigation over a vast area of nearby fields. The design also envisioned incorporating hydropower generators.

The dozen or so subcontractors included a company called TupalangsuvGESkurilish. The chair of that company was Sanginov.

Sanginov would go on to greater things after his extensive involvement in Sardoba, as Tashkent-based newspaper Gazeta.uz has reported.

In May 2017, Mirziyoyev signed a decree ordering the formation of a joint-stock company focused on hydropower projects – UzbekHydroEnergo. Apparently impressed by his work on Sardoba, Mirziyoyev gave Sanginov the nod.

Nothing in the sequence of events necessarily points to any wrongdoing, except that the government may now start to be pressed more on how and to whom lucrative contracts are doled out.

It was Mirziyoyev himself who raised the matter in his May 5 remarks.

“Where there is no quality, it is because of corruption, embezzlement and organizations that held ‘hooray-hooray’ tenders,” he said, implying that many contracts are granted with only a minimum scrutiny. “I intend to conduct a major study [of the situation]. I am obliged to do an analysis. And I may have to part with many people.”

There are indeed rich pickings for embezzlers and the corrupt in the construction sector. Large tenders are typically granted without any open competition, a fact that leaves them open to all manner of behind-the-scenes scheming.

What prosecutors admit is happening may only be a minute part of a bigger problem.

“In the years 2018-2019, 365 criminal offenses were committed in the construction sector. Of those, 72 percent were related to corruption. Out of those prosecuted, 14 were employees of the Construction Ministry,” a representative for the General Prosecutor’s Office told lawmakers on May 7.

The investigation into what happened at Sardoba has been entrusted to the State Security Service, or SSS, the reformed successor agency to the KGB. A criminal case into negligence and violation of safety codes was initiated on May 3.

Igor Shkradyuk, a renewable energy expert who serves on a public council under the Russian Natural Resources and Ecology Ministry, told Eurasianet that he believed it was unlikely that the Sardoba dam would have collapsed if it had been built competently.

“Uzbekistan still uses methods and calculations devised in Soviet times when they build reservoirs. But the climate has changed. For Central Asia, the main issue is the rapid melting of glaciers, which causes increased runoff from the mountains and precipitation. It is necessary to recalculate the conditions of all major hydrological structures to account for a greater likelihood of catastrophic floods,” Shkradyuk said.

It is not just dams that are being built shoddily. Just days before the Sardoba calamity, powerful winds struck the Bukhara region, hundreds of kilometers away, damaging hundreds of homes.

The houses, whose roofs flew away as if they were just made of cardboard, were created as part of a long-standing program to build large clusters of inexpensive, suburban-style, single-story dwellings. Buyers take out 15- or 20-year loans to pay for the homes. That incident too has raised questions about the quality of construction done at the government’s behest.

For now, the coronavirus crisis has handed the government ample powers to implement restrictive rules on movement, similar to those seen in many other parts of the world, thereby limiting what journalists can cover and explain to their readers and viewers. The task of providing news on natural disasters has instead fallen to compliant outlets, like the state TV news channel Uzbekistan24.

Frustration among citizen journalists and members of the public eager for more probing insights is palpable, however.

“As a citizen of Uzbekistan, I want to know what they want to hide from us and journalists,” Doniyor Ruzmetov, a popular blogger, wrote recently on his Telegram channel. “And I demand that they take measures against Interior Ministry employees who are violating the law.”