Only pro-government parties are allowed to compete in parliamentary elections this month. 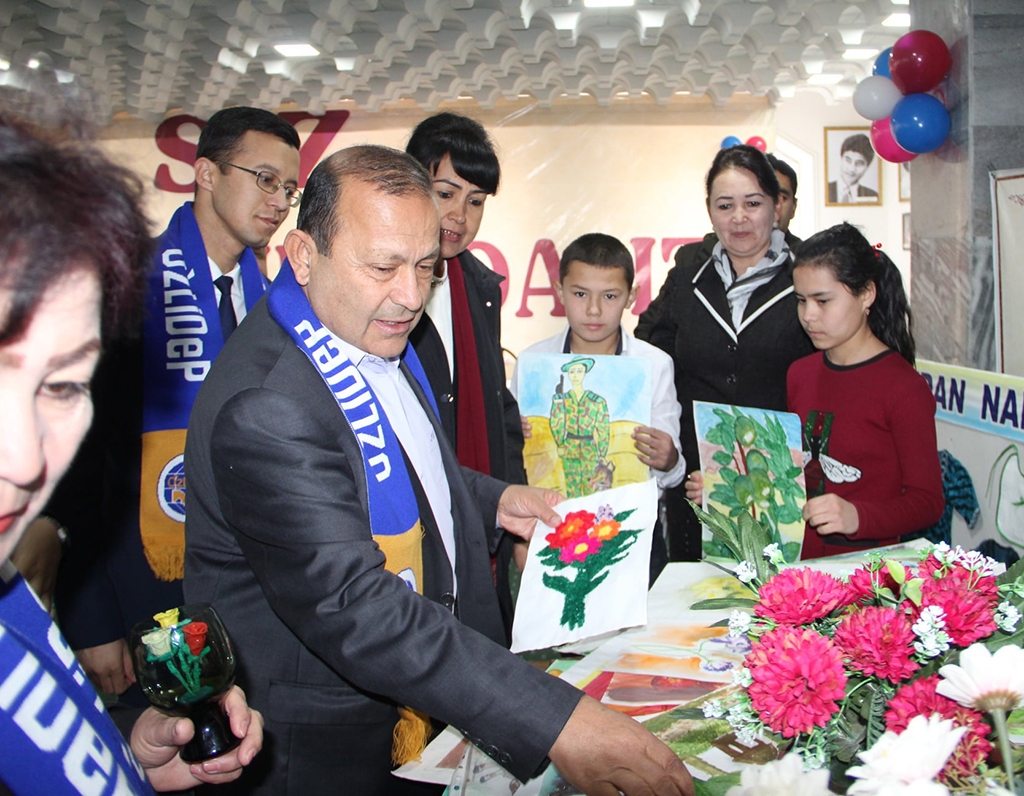 UzLiDeP leaders at a charity event in Karshi this week. (uzlidep.uz)

In competitive political systems, it is parties that chase voters. In Uzbekistan, it has always notionally worked the other way around. The handful of registered parties stands still and waits as an electorate evolves around them.

Those inclined to robustly reject government policy, meanwhile, have no home. Uzbekistan has lacked a real opposition for almost all of its three decades of independence.

That notwithstanding, those parties that are permitted to exist insist that the parliamentary elections taking place on December 22 will mark a break from the past.

Shukhrat Bafayev, a member of parliament with the government-aligned Liberal Democratic Party, or UzLiDeP, told Eurasianet that this vote would be different.

“The elections we are having this year are unusual because they are taking place in a situation of openness. The political system is being renewed,” he said.

As far as choice goes, however, almost nothing has changed since the last parliamentary elections, which took place in 2014.

On that occasion, the only four parties in the running divvied the seats among themselves: UzLiDeP won the right to send 52 deputies to the 150-seat lower house of parliament; the Democratic Party of Uzbekistan, or Milliy Tiklanish, 36; People’s Democratic Party, 27; and the Social Democratic Party, or Adolat, 20.

The Ecological Movement of Uzbekistan, or EMU, was automatically allocated 15 seats. That movement has now been reformatted as a party and is, accordingly, having to fight for its place in parliament.

One significant novelty is that there is improved gender balance among contenders. Under Uzbekistan’s electoral legislation, at least 30 percent of any party’s candidates must be women. This time, 310 of the 750 candidates are female – a 10 percent improvement on 2014.

But when it comes to politics itself, the scene looks moribund. One reason is that there is little of the cut-and-thrust familiar to more competitive systems. And that is the way it should be, according to some.

Bafayev said something even more telling while outlining the philosophy of his party, which bills itself as the representative of the entrepreneurial, do-it-yourself class.

“Socially vulnerable people, and there is no shortage of them – these are people that rely on government welfare. Well, the People’s Democratic Party works with that category,” he said.

But if UzLiDeP’s pro-business and pro-investment policies are adopted, those same people will evolve into a different, more independent and entrepreneurial class of citizen, Bafayev said.

“Bit by bit, we will pull them over to our side and our electorate will grow,” he said. “They will become financially independent and we will thereby take them away from the People’s Democratic Party.”

In Bafayev’s vision, the secret of politics is to make policy, stand still and wait till the voter comes to you.

Mikhail Yelshov, head strategist for the People’s Democratic Party, while staking out his party’s ground as the advocate for the worker and the weak, spoke in similar terms about the importance of social progress.

“We set ourselves the goal of leading our electorate to the level of the middle class,” said Yelshov, who sees his party in the mold of European, left-of-center, social-democratic movements.

For all these fine ideological distinctions, few political players dare to engage in polemics with the government, and most certainly not with President Shavkat Mirziyoyev himself.

In fact, Yelshov said that he broadly endorsed the ongoing reform agenda and that his party’s concerns largely arise from whether or not implementation is being done correctly.

Uzbek politics is intensely consensual. Public confrontations are almost unheard of, although there is some notional ideological space separating the parties.

Milliy Tiklanish, the second-largest party in parliament, bills itself as a champion of cultural revival and family values. Education and preservation of the Uzbek language are among the party’s priority issues.

The center-left campaign rhetoric adopted by the Adolat party makes it hard at times to distinguish clearly from the People’s Democratic Party. But where the latter sees welfare as key, Adolat, as suggested by its name, which means justice in Uzbek, sees reform of the judicial system as the cornerstone of progress.

Fazliddin Ziyayev, head of ideology at Adolat, said his party wishes to see civil, criminal, economic and administrative courts, which all now operate separately, merged under the roofs of city, district and regional courts.

“That way people will be able to address [their problems] in one court, and so the courts will begin to function,” Ziyayev said.

This easing of bureaucratic boondoggles and a concomitant growth in private industry would flow out of that reform, he said.

An excess of consensus

Even on issues where thematically narrow parties might elsewhere be expected to adopt contrary positions, consensual language is the norm.

The Ecological Movement of Uzbekistan won its unique, quota-guaranteed status in parliament – initially enacted in the elections of 2009-10 – by virtue of the symbolic importance accorded to the environment. Uzbekistan is the site of arguably one of the worst ecological disasters in human history – the Soviet-engineered desiccation of the Aral Sea.

Predictably, the now-rebranded Ecological Party trains its attention on the need to bolster environmental controls, the promotion of renewables and the conservation of habitat.

Less obviously, the Ecological Party has embraced the government’s plans to adopt nuclear power, which are being pushed through with assistance from Russia and negligible nationwide public consultation.

Sanginov said they summoned residents of the Jizzakh region, where the atomic power station is to be built, and the Ecological Party’s specialists to take part in those discussions.

“We bombarded [Uzatom] with questions about safety, technology, social issues, and what would be done with nuclear waste,” Sanginov said. “Some answers we liked, some we did not.”

Following more intensive exploration of potential upsides and details of the power plant project, said Sanginov, the party decided it would offer its endorsement.

“This will all have a positive effect on people’s lives. About 12,000 people will be employed for seven-to-eight years doing construction work. And then about 2,000 people will continue to work at the plant,” Sanginov said.

No party has objected in any way to the nuclear power plant.

Detractors of this threadbare political menu contend that the elections will serve to highlight the weakness of Uzbekistan’s commitment to transitioning toward greater democratic representation. This is unfair, say those pushing the government line; there are no legal impediments to anybody wishing to create new parties.

As the Tashkent-based rights group Ezgulik pointed out in a public appeal to President Mirziyoyev earlier this year, the requirements for those wishing to register a new party are unrealistic.

When legislation regulating the activity of political parties was first adopted, all any aspiring party needed was 3,000 supporters’ signatures.

“Then it was increased to 5,000, and then to 20,000,” Ezgulik said in its letter. “This, of course, is contrary to the democratic demands and claims made in Uzbekistan now.”

And even when an aspiring political force managed to overcome that onerous threshold, such as when the Birlik People's Movement lodged 21,000 signatures with the Justice Ministry in 2003, the application went nowhere.

Ezgulik chairman Abdurahmon Tashanov said that on the face of it, there have been some positive trends this election season. Parties have shown more life than ever before, sometimes injecting themselves into the public debate, and the televised debates have been lively and eagerly followed.

“But there is one feature missing – political pluralism,” said Tashanov. “This is not an election. It is just some kind of political process.”