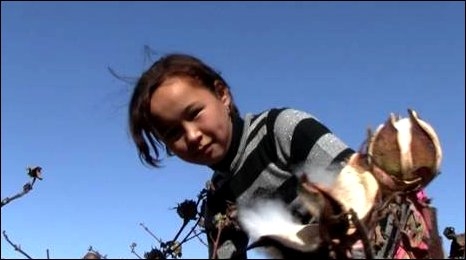 A German non-governmental organization using an innovative approach to try to get companies to cease participating in the use of forced child labor in Uzbekistan has received a disappointing response from European cotton traders. Yet the process has shed light on the issue and enlisted a pledge from the traders to cease buying cotton from Uzbekistan -- if it can be proved child labor exists.

The Berlin-based European Center for Constitutional and Human Rights (ECCHR) tried targeting European Union companies that trade in Uzbek cotton and profit from child labor by using the complaints procedure of the Organisation for Economic Co-Operation and Development (OECD), a 33-member Paris-based economic body.

ECCHR was joined by the Uzbek-German Forum for Human Rights and other organizations in Europe trying to get traction for their allegations that these corporations had violated OECD guidelines. The OECD accepted the complaints for review at different focal points in the EU countries where the various companies were located.

After a confidential conciliation meeting with the parties, the UK National Contact Point (NCP) for the OECD then published on July 11 its final statements regarding ICT Cotton Limited (ICTC) and Cargill Cotton Limited in Uzbekistan. The UK NCP concluded:

ICT notes that ECCHR and other organisations strongly hold the view that there is systematic use of forced child labour in cotton picking in Uzbekistan and for this reason ECCHR believes that cessation of trading is an appropriate step. Although ICT itself does not believe that such systematic abuses are adopted in Uzbekistan and for this reason does not accept the request to cease trading, it acknowledges that it is important to avoid any such practices. It also acknowledges that businesses have a responsibility to take active steps to help to prevent such practices in their industry and to investigate the concerns properly, so that appropriate action can be taken to prevent any such practices if they are shown to occur in the industry either in Uzbekistan or elsewhere.

ECCHR agreed to drop the request for cessation of trading for the time being, and ICT said it would "immediately suspend business relations with any supplier who will, beyond reasonable doubt, be found to have used such practices.”

The statement regarding Cargill Cotton Limited is similar, although it adds an important call for an international investigation:

Cargill does not condone the use of abusive, enforced or illegal labour wherever this may occur. It recognises that there have been serious allegations about the systematic use of forced child labour in Uzbekistan and would wish such allegations to be investigated by an appropriate independent international organisation. ECCHR believes that businesses have a responsibility to take active steps to prevent such practices as forced child labour in the supply chain.

The cotton companies also pledged to revisit the issue in a year's time.

For the first time, cotton traders have declared themselves ready to work against child labor in Uzbekistan, and to enter into dialogue with civil society organizations about the situation in the country. It is now up to the corporations to show that they take these responsibilities seriously by lending weight to their demands. Should these measures fail to achieve results, ECCHR reserves the right to begin renewed OECD proceedings, this time demanding an end to trade relations with Uzbekistan.

The problem with the demand for an international inspection is that Uzbekistan refuses to allow any type of monitors to come into the country to check for child labor; indeed, the government denies the problem exists at all.

Another organization, the London-based Anti-Slavery International recently received a discouraging answer to its appeal to the European Union to reconsider its trade preferences for Uzbekistan -- also based on the alleged absence of evidence.

The International Labor Organization (ILO) expressed grave concerns at its annual meeting in June about reports of forced child labour and requested Tashkent to permit an ILO mission to inspect the fields in Uzbekistan's various provinces during the cotton harvest in the fall. But the Uzbek government has refused to issue the invitation to date -- thereby helping to keep the vicious circle alive, with both EU and corporate demands for "proof" that can only be accepted from a multilateral body, yet no permission for that body to come and fact-find.

In part, the companies could take advantage of the fact that the ILO's concerns about Uzbekistan were based on local and international NGO reports, not its own assessment. Yet the ILO report also references UNICEF's reports, and UNICEF has been involved in a a mitigation program conducted with the Uzbek government to try to keep younger school-children out of the fields and in the class room and to delay the use of high-schoolers in the field. The very presence of the program is an indirect confirmation of the problem of forced child labor in Uzbekistan.

The OECD mediation process is still pending in Germany and Switzerland.