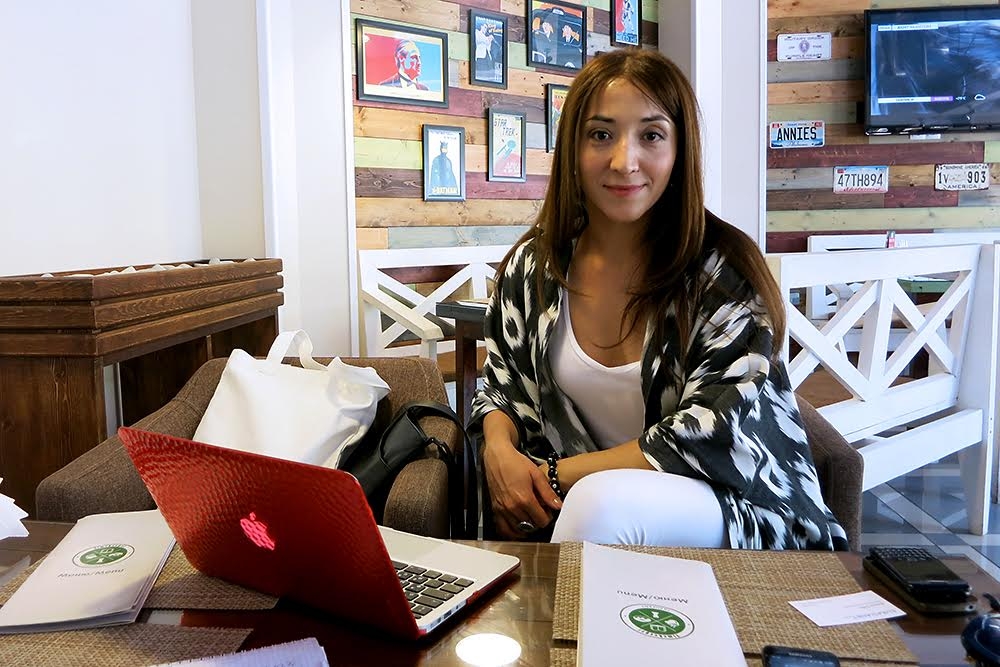 Uzbekistani fashion designer Saida Amir is part of a crop of talented, go-getting designers pushing Uzbekistan’s garment industry forward following the removal of Gulnara Karimova from the country’s fashion scene. Many young designers are playing to the sector’s natural strengths, taking inspiration from the centuries-old traditions of Uzbekistani textiles and putting a modish 21st-century twist on them. (Photo: Joanna Lillis)

Political intrigue in Uzbekistan may have removed first lady of glitz Gulnara Karimova from the fashion scene, but an abiding appetite for style in Tashkent is enabling the emergence of bold, young designers.

When she was still at the top of her game in Uzbekistan, Karimova designed and promoted her eponymous Guli luxury brand of fashion accessories, and rubbed shoulders with international celebrities at top catwalk shows. Her status as the president’s eldest daughter, however, could not prevent her downfall last February, when she was placed under house arrest on suspicion of corruption amid rumors of jostling for influence and family feuds.

With Guli gone, Uzbekistan’s fashion industry is now showing it is far more than just Karimova.

Designers like Saida Amir take inspiration from the centuries-old traditions of Uzbek textiles and put a 21st-century twist on them. “I love our heritage. I love our traditional techniques,” Amir enthused in an interview at a trendy downtown Tashkent coffee shop. “I’m inspired by our heritage, but I want to develop it and make something new.”

Draped in an elegant black-and-white jacket of her own design made out of silk produced in the Fergana Valley, this up-and-coming 35-year-old designer is a walking advertisement for Uzbekistan’s fashion industry.

Amir, who recently returned from graduate studies in design in London, animatedly demonstrated a collection inspired by the suzani, an embroidered textile usually hung on walls to decorate a home. In these cutting-edge designs, Amir has given the suzani a futuristic flair, she said.

“Here I show some patterns that are always used [in suzani] – you can see some circles, some sharp edges,” Amir told EurasiaNet.org as she pointed out designs flashing across the screen of her MacBook. “Here I show some symbols, like pepper, almonds, symbols to protect from the evil eye.”

Amir later pointed to a picture of a flowing red-and-gold outfit featured in her Passion for the East collection.

“This design was inspired by the kalchata – that’s an Asian robe,” she said.

This fusion of the traditional with the contemporary is typical of the new breed of Uzbekistani designers, who focus on the homegrown to “make something identifying our culture,” as Amir put it.

Across town in Tashkent’s Human House boutique – a retail outlet for the country’s design talent – Taisiya Chursina showed off a silk evening dress enlivened with bright flashes of turquoise, yellow, and red.

“It’s not traditional Uzbek style, though there are elements of this,” the twenty-something designer told EurasiaNet.org. “I make contemporary clothes out of traditional materials … for people who like to dress in an interesting, artful way.”

Many of Chursina’s designs offer a modern take on Uzbekistan’s ikat silks, which are made with a method similar to tie-dyeing to produce vivid patterns.

Silk is a trademark of many contemporary Uzbekistani designers. That is hardly surprising as the country is the world’s third largest silk producer.

“Everything is [made from] our pure silk from the cocoon,” Amir said proudly, demonstrating a collection of her jackets made using a classic Uzbekistani quilting technique.

Many designers source their silk from the celebrated Yodgorlik factory in the silk-weaving center of Margilan in the Fergana Valley, where sericulture – the rearing of silkworms and production of silk – has been practiced for well over a millennium.

“Most of the [designers’] output is made from our traditional materials,” Anna Krichagina, co-owner of Human Wear, told EurasiaNet.org, gesturing at some outfits on display in the boutique produced from local textiles like silk, cotton and a silk-cotton mix called adras.

The rag trade’s association with Uzbekistan’s cotton industry is tainted with some controversy. Karimova was once booted out of New York Fashion Week after public protests over the use of child and forced labor to pick Uzbekistani cotton, which has been subject of a boycott by some international retailers.

Despite that public relations disaster, industry insiders in Tashkent say Karimova’s involvement did do the national fashion scene a favor. “All the shows organized by her [in Uzbekistan] boosted interest in national design, in national clothes, in national textiles,” Vera Chursina, a professor at Tashkent’s National Institute of Art and Design (and the mother of designer Taisiya), told EurasiaNet.org.

Before her downfall, Karimova’s pet project was Style.uz, a now defunct annual fashion and cultural extravaganza derided by her critics as a vanity project. But the platform was welcomed by many local designers as a way to give fresh talent a chance to shine and put Uzbekistani fashion on the map.