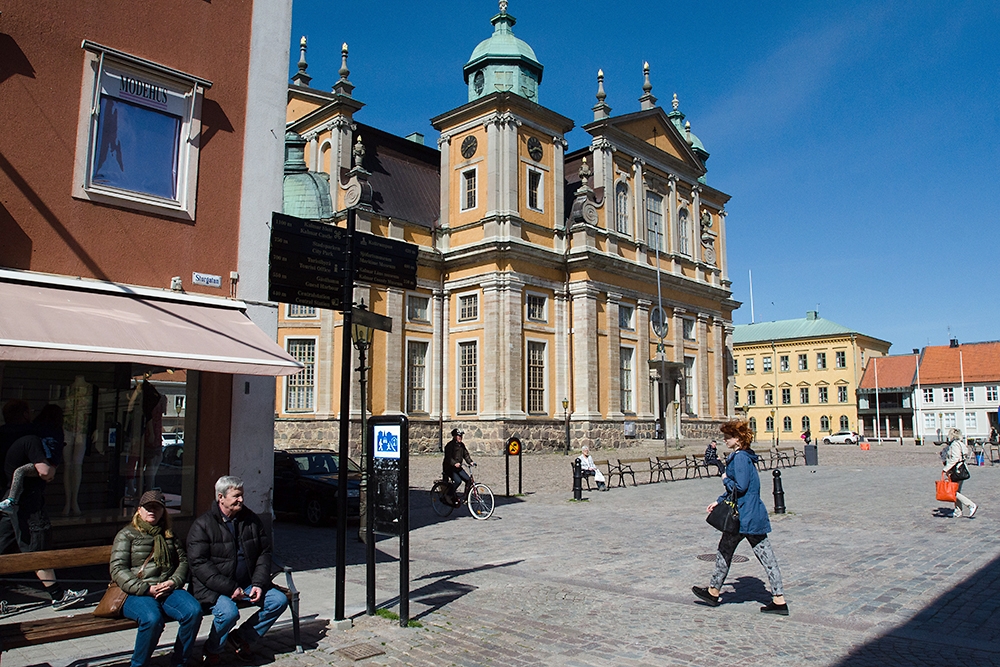 Estimates of how many Uzbek refugees have moved to the Swedish coastal city of Kalmar range from 300 to 1,000. (Photo: Dean C.K. Cox)

In many ways, Kalmar is an archetypal Swedish settlement with a picture-postcard center featuring fastidiously clean cobblestone streets and centuries-old wooden buildings. But the town, situated on Sweden’s southeastern coast, is unusual in one respect: it is home to hundreds of Uzbek refugees harboring a Silk Road secret.

The bulk of Uzbeks in Kalmar come from Andijan, a city in Uzbekistan’s Ferghana Valley that was the scene of a mass protest and subsequent massacre a decade ago. Many fled to Sweden out of fear that Uzbek President Islam Karimov’s regime, which is ranked by rights groups as one of the most repressive on earth, would imprison or harass them if they stayed.

Ten years after Uzbek security forces broke up the mass demonstration in Andijan by spraying the crowd with automatic-weapons fire, it is clear those Kalmar residents who lived through the events are still traumatized. These days they uniformly refuse to speak publically to outsiders about what they experienced on May 13, 2005. Those who have tried to break down the wall of silence say the Uzbek refugees are apprehensive that the Uzbek government can and will retaliate – either against them directly, or punish relatives back home.

“There is such a climate of fear, generally, that it is very difficult to get people to speak up and to make sure that nothing happens to them once they have spoken to you,” said Maisy Weicherding, a researcher with Amnesty International who co-authored a report, titled “Secrets and Lies: Forced Confessions Under Torture in Uzbekistan,” published on April 15. The report details the use of systematic torture and other human rights violations in the Central Asian country.

Andijan witnesses even seem reluctant to trust other members of the Uzbek refugee community in Kalmar. A man who identified himself by a pseudonym, Jaloliddin Rashidov, said his political activism forced him to flee Uzbekistan in 2004 from the Kokand Region in eastern Uzbekistan. He lived first in Ukraine before resettling with his family in Sweden in 2006. He added that even after years of acquaintanceship, refugees from Andijan in Kalmar still will not open up to him.

“They are a little bit scared talking about … Andijan and the Uzbek government,” Rashidov said. “They do not want their relatives who were left behind [in Uzbekistan] to be hurt or get in trouble.”

Rashidov acknowledged that concerns about the long arm of the Uzbek government security forces are not misplaced. Rights watchdogs say Karimov’s regime is notorious for pursuing Uzbek critics abroad, going so far as to kidnap and assassinate some of them. In 2012, for example, one of Uzbekistan’s most prominent Islamic clerics in exile, Obidkhon Qori Nazarov, was shot multiple times in the stairway of his apartment building in Stromsund, a village in central Sweden. He survived the apparent assassination attempt, but was in a coma for almost two years. His family now lives in hiding.

Another prominent Uzbek imam who was critical of Karimov’s policies, Abdullah Bukhari, was shot and killed in December 2014 in Istanbul, where he was living in exile with his family.

Even Rashidov’s family has experienced intimidation. His teenage daughter recalled that while visiting Kyiv in the winter of 2013, several men followed her and a family friend in the metro and along the streets of the Ukrainian capital.

After that episode, “my dad would not let me go out alone – even outside of the door. There was always someone with me,” she said. “There were times when he did not want me to go out, especially after what happened to his good friend imam Obid [Nazarov].”

Officials in Sweden and Turkey suspect Russian intelligence operatives, working with Uzbek authorities, may have played a part in the two attacks against the Uzbek clerics. Amnesty International’s Weicherding also believes Uzbek authorities are working together with Russian officials. Uzbek exiles in Moscow are especially vulnerable to what rights activists describe as “extra-territorial repression,” she said.

“I am certainly very aware of (the Uzbek security services) monitoring people in exile,” Weicherding said. “We have long had really serious concerns about Russia. Uzbekistani security service [agents] openly abduct [exiles] from the streets of Moscow, … and just take them straight back to Uzbekistan.”

Silence did not always shroud the Andijan events. In the weeks after the massacre, dueling narratives emerged. Uzbek authorities insisted that armed Islamic militants instigated the uprising in Andijan in May 2005, forcing government troops to use force to maintain order. Meanwhile, researchers from Human Rights Watch issued an exhaustive report that showed the protest was rooted in popular discontent with the local political leadership’s economic policies. “The scale of this killing was so extensive, and its nature was so indiscriminate and disproportionate, that it can best be described as a massacre,” the report stated.

According to some estimates, as many as 1,500 people were killed during the Andijan events. The official Uzbek government death toll is 187. Uzbek authorities adamantly refused to allow an independent investigation into the Andijan events.

In the years immediately following the 2005 massacre, exile groups mounted anniversary protests across Europe and the United States, and witnesses regularly were quoted in media reports. But over the last five years, amidst the ratcheting up of government repression, the exile community shifted to silent mode.

A EurasiaNet.org correspondent interviewed one Andijan witness in Kalmar, who spoke on condition of anonymity and who declined to discuss specifics of what he saw on that tragic day a decade ago. He did, however, offer an explanation as to why exiles do not want to discuss Andijan anymore.

“For many of us it was a personal decision. No one told us not to talk anymore. But there are problems. We still have relatives in Andijan and we are afraid for them. They [Uzbek security agents] can even just come and shoot you in your own stairwell. That is why we decided several years ago not to have any more interviews,” he said.

Centuries ago, Andijan was a hub on the fabled Silk Road trade route linking Asia and Europe; these days, it is a somewhat gritty industrial city of about 350,000. With its semi-desert-like climate, Andijan seems a pole apart from Kalmar for Uzbek refugees.

In 2004, the year before the Andijan massacre, Sweden’s Statistics Department recorded 441 Uzbek refugees in the country. The number more than doubled in 2005 to 964, and today stands at 3,477.

One of Kalmar’s Uzbek refugees said that for many of his cohort, the exile experience had proven disillusioning. The present-day challenges of building a new life in a strange land put pressure on Uzbek refugees to forget the past and focus on the future.

“No one trusts anyone right now. No one trusts the democracy of Europe. No one trusts Uzbekistan. No one wants to talk with anyone,” he said quietly while sipping coffee at a shopping mall and occasionally looking around for eavesdroppers. “People just want to be quiet. No one can find a good life for us, so we have to do it ourselves – no Germany, no Sweden, no USA. No one.”

Dean C.K. Cox is the multimedia editor for EurasiaNet.