Her social media bot promises to help Uzbek farmers get their goods to market while increasing their profit margins. 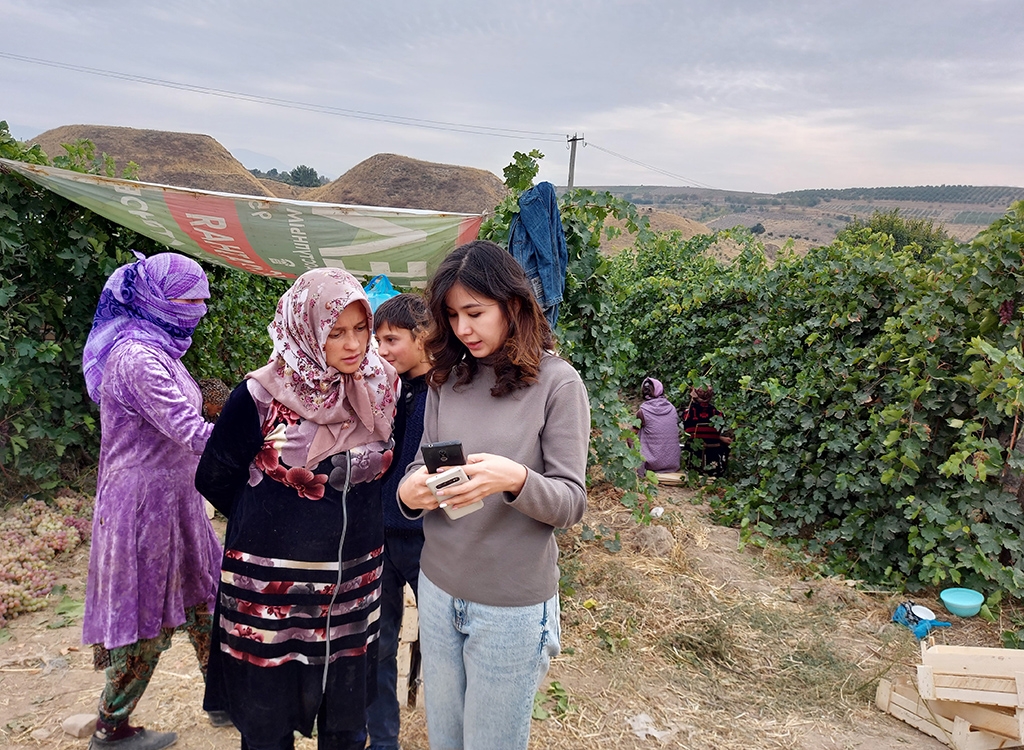 Atadjanova shows smallholder Todjiboyeva how to use the Dalatek bot to market her grapes. (photo by Joanna Lillis)

A grape plantation in the rolling hills outside Uzbekistan’s capital may seem an unlikely spot to find a tech entrepreneur going about her business.

But Dildora Atadjanova, cellphone in hand, is on a mission to extoll the virtues of technology to farmers.

Mukhlisa Todjiboyeva stared at the screen as Atadjanova opened the Telegram app – Uzbekistan’s go-to means of communication for business and pleasure – and launched a bot that promises to be lifechanging for smallholders.

At first, the farmer’s face, peeking out from a pink headscarf, looked puzzled. But as Atadjanova demonstrated the automated software, she nodded and smiled.

“I’ll definitely use this Telegram bot,” Todjiboyeva enthused, and set about registering as the latest user.

Atadjanova’s brainchild is simple but ingenious.

Dalatek is a web-based platform that connects farmers with exporters and other buyers such as restaurateurs, elbowing out the middleman whose cut reduces the already slim profits for those growing produce.

The developers made the service available as a bot because farmers “are all using Telegram,” Atadjanova told Eurasianet in fluent English in an interview in her slick office in Tashkent. “Farmers upload what they have, and exporters can see and contact the farmer.”

“It’s easy to see what the farmer’s now selling,” she explained, demonstrating the bot in action. “For example, this is pomegranates – he’s selling 70 kilograms, 50,000 sums. He set the price, and if I like it I can call him now.”

She was speaking before driving out to nearby Parkent, a lush land of vineyards and orchards where the grape harvest was in full swing on a recent fall morning, the mostly female pickers nimbly working the vines and marching past with crates of grapes on their heads.

Most farmers like Todjiboyeva work smallholdings on land leased from the state, so tech solutions that can cut costs are welcome.

With its temperate climate, cheap labor and abundant crops of fruit and vegetables like melons, pomegranates, cherries, tomatoes and pumpkins, Uzbekistan should be an exporter’s dream.

But that was not Atadjanova’s experience when she founded an agricultural export company, Teodora Goods, in 2018.

It looked straightforward on paper, but getting produce to markets abroad was no breeze. The goods often spoiled en route because farmers and resellers would pack and store them willy-nilly.

When 700 tons of persimmons and grapes that she was exporting once perished, “things started changing in my mind,” said Atadjanova. “I could see how much food wastage was happening, in Uzbekistan and in the whole world, in the export business.”

Globally, 14 percent of produce spoils between harvesting and retail; the number tops 20 percent in Central and South Asia, the UN Food and Agriculture Organization says. There is no reliable figure for Uzbekistan, but Atadjanova estimates that over half often spoils before reaching the customer.

One reason profit margins are low for Uzbekistan’s exporters is “because many products are not moved efficiently from farmers to end consumers,” the United States Agency for International Development said recently. For every $1 customers spend on an apple from Uzbekistan, exporters earn just 15 cents.

Better processing, storing and packaging would open access to premium markets, potentially increasing exporters’ “share of the pie up to 60 percent of the final sale price.”

The key is cold-chain processes, the logistics of getting perishable goods from the field to consumer intact – “a science you have to learn for ages,” said Atadjanova, who travelled to Italy and India to study the skills.

Knowing “the cost of the wrong decision at each and every step,” she started going out into the fields to oversee each deal.

She taught cold-chain processes to farmers – no mean feat when older males resented being bossed about by a young woman – “what you, a girl?” they would scoff at Atadjanova, now 28.

A couple of farmers even tried to push her around, but Atadjanova gave as good as she got. “I did boxing, so I’m not scared,” she grinned. “I pushed them back.”

Atadjanova was already cutting out the middlemen, who she believed were gumming up the process with an eye on short-term gain. But it was exhausting. She was spending 350 days a year on the road making deals, then micromanaging their execution.

Small wonder that exporters use intermediaries: Collecting one 20-ton container of produce can entail negotiating with 100 smallholders. The smallholders, in turn, rely on middlemen because they lack means of contacting customers – until now.

Atadjanova founded Dalatek with IT entrepreneur Laziz Adkhamov in late 2020, using their own start-up capital.

Since launching this September, Dalatek has acquired 1,200 users. Its potential market is huge: Uzbekistan has 5 million smallholders and 92,600 larger farms. There are also plans to branch out into other countries.

This could be a gamechanger for Uzbekistan’s agricultural sector, which generates 28 percent of GDP and employs 27 percent of the labor force but is hidebound by outdated practices.

Dalatek aims to be “a platform that connects all players in the agricultural sales chain.”

The start-up is not a money-spinner yet, but its founders have begun monetizing it by selling market research. Subscriptions and taking commissions on sales are other options.

“Dalatek is about helping users increase their sales,” said Atadjanova. Currently, “farmers are losing, smallholders are losing, exporters are losing” – but the power of tech can bring solutions to their problems.