Farmers are moving west under a government initiative. 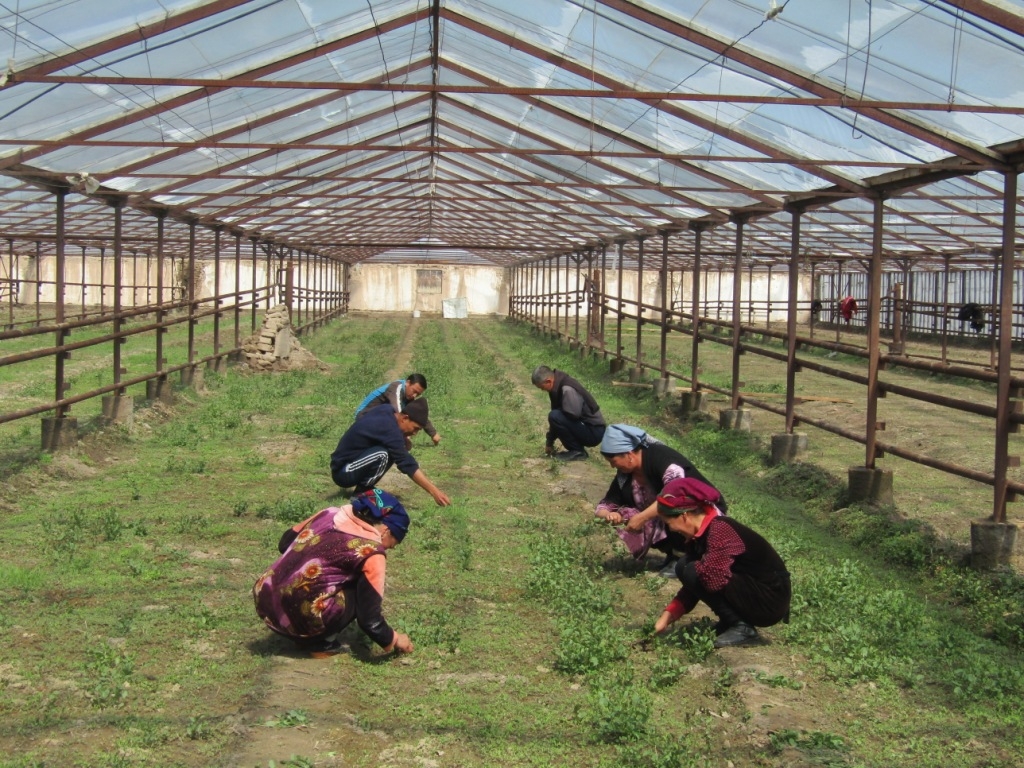 Workers in one of Mamadaliyev’s greenhouses in Karakalpakstan. (Photos: Eurasianet)

It is five in the morning. Khayotjon Mamadaliyev is doing the rounds of his fields. Overnight, he irrigated his red peppers, cotton and grain. He needs to keep a close eye on the water to make sure there is enough to go around. Water around his farm is in grave shortage and is rationed.

Mamadaliyev’s land extends over 105 hectares, equal to around one-third the size of New York’s Central Park. For somebody from the Ferghana Valley, that is almost inconceivably vast.

But Mamadaliyev is not in his luxuriantly fertile and densely populated native Ferghana Valley – he is in the unforgiving wilderness of Karakalpakstan, a dusty salt-blown region on the western edges of Uzbekistan.

Mamadaliyev, 35, arrived in Karakalpakstan in early January, leaving behind his meager two hectares in the Ferghana region, where he cultivated bell peppers, garlic and carrots. His new plots are in the Taxtako‘pir district, around 100 kilometers from the nearest urban center, Nukus.

The going has been tough. Mamadaliyev’s face is weather-beaten and sunburnt, his hands covered in callouses and scratches, and his clothes ever-spattered with mud. Despite the fatigue, his eyes have a glint of energy and optimism.

“The land is saline and it needs to be irrigated to wash out the salt. Only then can you think about sowing. As soon as we arrived, we began to work in the greenhouses. We planted bell peppers and red peppers to reap enough seeds to sow over 30 hectares. The conditions here differ from those in the Ferghana Valley. Here the sowing season is about 20-30 days later. The winter is long and cold. You need to put more effort into growing crops on this land,” Mamadaliyev said.

Mamadaliyev is one of 130 farmers who left their native Ferghana Valley to try their hand in Karakalpakstan earlier this year as part of a government initiative. The main draw was the sheer amount of land being made available to farmers from the Ferghana region – one of three administrative regions in Uzbekistan’s section of the Ferghana Valley.

“At the end of December, they summoned all the farmers to the Ferghana regional administration. They offered us the option to go to Karakalpakstan and receive land. They promised to support us with cheap credit, at 3 percent annual interest, and farming equipment. So far, they have given us basic buildings and greenhouses,” Mamadaliyev said.

As soon as he arrived, Mamadaliyev put his mind to learning the Karakalpak language, which is related to Uzbek but closer to Kazakh. He has hired personnel locally to work on the land and in the greenhouses. He took out a small bank loan to buy seeds and fertilizer. Until he sees the results of his first harvest though, he is avoiding borrowing excessive sums.

Murat Tolipov, 42, also arrived in January and brought along his family, leaving behind a minute patch of fields in the Ferghana region. The offer of land, cheap credit and equipment were enticing enough for him to make the snap decision to relocate.

Directly on arrival, he set to sowing cotton, wheat, clover, sesame, soybeans, beans, peppers, tomatoes and carrots. He then built winter greenhouses so he could ensure the output of vegetables year-round. But Tolipov wants to go beyond just arable farming.

"We are also planning to develop livestock here. We are waiting on bank loans to purchase 100 heads of cattle from Estonia and Germany. What is special about them is that they yield a lot of milk and more meat than local breeds,” he told Eurasianet.

Tolipov’s whole family works on the farm – his wife and three children. But the living conditions are spartan. His home is small and it is not hooked up to any central heating or gas network. The local municipal government helped out with supplies of wood for heating.

Taxtako‘pir district officials say that the arriving farmers from the Ferghana Valley have been granted use of 5,290 hectares in total. Karakalpakstan has lots of land and a relatively small population of 1.8 million.

But as Madamin Sidikov, a Ferghana farmer with two decades of experience, told Eurasianet, the conditions of the two regions could not be more different.

“The cotton yield in the Ferghana Valley is 27-30 centners (2,700-3,700 kilograms) per hectare and in Karakalpakstan it is 12-13 centners. It is the same with grain. If we harvest 50-55 centners per hectare on average, then for Karakalpak farmers it is 25-30 centners. In Karakalpakstan, they are more focused on livestock and growing rice. The land is arid and farmers constantly experience shortages of water for irrigation,” said Sidikov.

Aybek Kimsanbayev, an agronomist, said that the main risk of farming in Karakalpakstan is from the high content of salt in the soil. The dried-up Aral Sea is just nearby, and it was only a few weeks ago that salt and dust storms were sweeping across the area in plumes so thick that people could barely see anything a few dozen meters before them.

“We need to create protected areas to shelter agricultural crops from dust coming from the bottom of the [former] Aral Sea. We need to plant protective woods and improve the process of land reclamation,” Kimsanbayev said.

Zinoviy Novitsky, another specialist, said modern irrigation technology will be key to making the Karakalpakstan venture a success. Only around 5 percent of farming land in Uzbekistan, some 200,000 hectares, is watered with drip irrigation systems, he said.

“This year Uzbekistan is enduring a terrible drought. And there is no certainty that the years to come will be any better. So I am suggesting that Karakalpakstan abandon cotton and rice. These crops use up a lot of water. We need farmers to grow crops that need little moisture,” Novitsky said.

Mamadaliyev says he lives by those rules. His mantra is that you can always get a good harvest as long as you use water and fertilizer sparingly and work tirelessly. His plan is to export to Kazakhstan, which is just next door. That will bring in foreign cash and help cover the costs of production and the purchase of a new tractor.

The intention is to bring over his whole family to Karakalpakstan in August.

“I have learned to drink black tea with milk, as they do here, and I have very much fallen in love with the traditional Karakalpak dish of beshbarmak. That means I will be staying here a long time,” Mamadaliyev said.