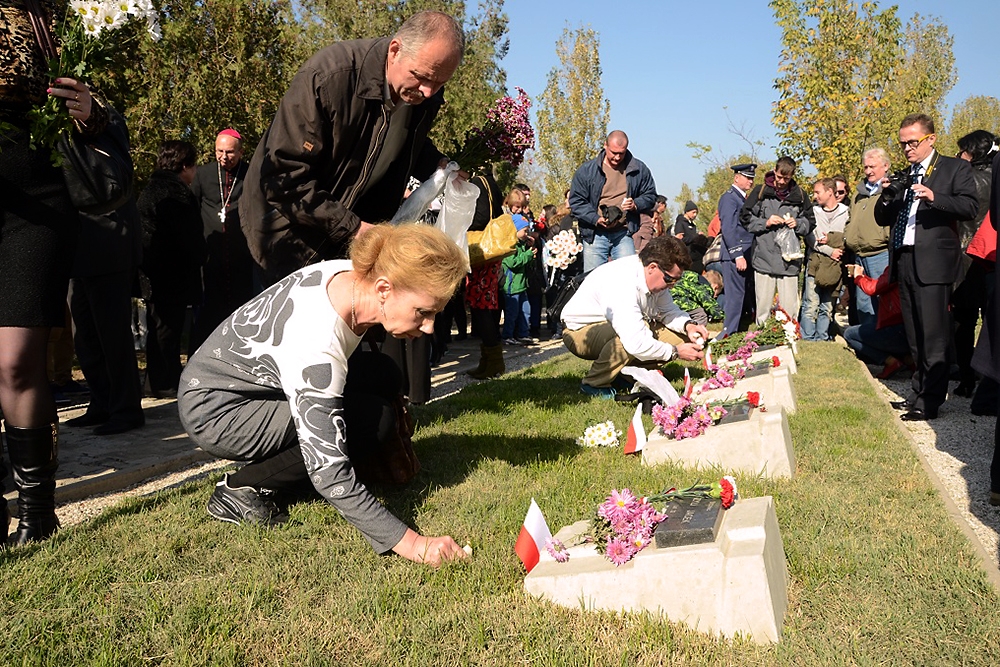 In a village outside Tashkent lie the graves of 46 Polish men and women, who amid the tumult of the Second World War, experienced grueling deaths in this corner of Central Asia.

At the behest of the Polish Embassy, residents of Almazar these days tend to the neat burial plots — reminders of the thousands of Poles who perished in Uzbekistan during the wartime years.

Most Uzbeks know little to nothing about what brought the Polish officers, soldiers and civilians to their land. Their story begins in 1939 with the Soviet-Nazi nonaggression pact and the accompanying partition of Poland. In the two years that followed, untold numbers of Poles were deported from the Soviet zone. There is no consensus on how many Poles were uprooted and sent eastward, but estimates vary from around 320,000 to as high as 1 million.

Germany’s declaration of war on the Soviet Union in 1941 earned the exiled Poles a grim kind of reprieve. A treaty hammered out between the Polish government-in-exile in London and the Soviet government secured the liberation of Polish prisoners of war and deportees, and set the terms for the formation of an army drawn from that amnestied population. This force would eventually evolve into the Polish Second Corps, led by General Władysław Anders, a legendary military commander whom a British War Office functionary once described as “the uncrowned King of Poland in exile.”

Free but helpless in 1941, the Polish citizens began making their ways to Polish Army camps around the Soviet Union. Transportation was in short supply because of the war effort, and many, weakened by their plight, died before reaching their destinations.

In early 1942, as the Soviet and British governments looked to bolster allied positions in Iran, the Polish Army began its relocation to the southern reaches of the Soviet Union. Anders left the Siberian town of Totskoye on January 15, 1942, and within the week was in what was to become the new headquarters of the Polish forces, a town outside Tashkent called Yangiyul.

Almazar, a village that during the war was called Vrevskoye, was some 30 kilometers southwest down the road, and became the settlement for army training and engineers.

Abdulla Tursunov, the chairman of Almazar residents’ association, tells of a plaintive sight. “Anders and his soldiers, along with regular civilians that had fled from a German captivity arrived in Almazar. They were put up at the village school. Among them there were wounded soldiers. The former captives were weak and feeble. Many of them died. Forty-six people are buried here,” Tursunov said, citing the recollections of elderly locals.

Other Polish encampments were scattered across vast areas of Central Asia, separated from one another by deserts and mountain ranges.

Poles heading to Central Asia had little idea of the conditions they would find. The ranks of soldiers and civilians already rendered feeble by imprisonment and poor conditions were thinned out by exposure to typhus, malaria and hepatitis. About 2,155 Polish officers, soldiers and civilians are estimated to have died in villages and towns across Uzbekistan. The real number is likely far greater.

Stories of the various grisly fates that befell the Polish army were studiously ignored in the Soviet Union, and the facts have been given no attention by Uzbek historians. As late as 1991, when the Soviet Union collapsed, even the best-educated of Soviet citizens knew little or nothing about the Katyn massacre of Polish officers at the hands of the Red Army.

Abdurahim Ganiyev, a worker with a mahalla (neighborhood) committee in Almazar, knows more than most, which has earned him the affectionate nickname “the walking encyclopedia.”

“My father-in-law told me that the local people first thought the Poles were captured Germans because of their unusual uniforms. Many of them could speak Russian, which made communicating with them much easier,” he said.

The uniforms might, in fact, have come from any number of sources. As the Soviets were largely unable or unwilling to supply the nascent Polish Army with equipment, much of the necessary clothing was reluctantly delivered by the British via Arkhangelsk naval convoys. Such uniforms as the Soviets were able to volunteer belonged originally to the Imperial Russian or Austrian armies.

Ganiyev said that villagers in Almazar recalled that the Poles came from all walks of life. “Among them there were peasants, craftsmen, ironsmiths,” he said.

The Poles turned their hand to all kinds of work, fixing ploughs, scythes and axes. Carpenters built window frames and blacksmiths mended metal utensils. For their work, the Poles were paid with bread, soup, vegetables and dried fruit, Ganiyev said.

Nuriddin Ismoilov, a 93-year Uzbek veteran of the Second World War, left for the front before his 18th birthday. After returning home, he worked for many years in the NKVD, the forerunner of the KGB. His access to secret files gave him a special insight into the story of Anders and his men.

“There were many Polish soldiers. They mostly put them in collective farms. Of course, the conditions of their food and board were better than in Russia. After the victory over the Germans, the ones that survived returned back to their homeland,” Ismoilov said.

That account is somewhat superficial and fanciful, however. Some of the surviving tales from civilians that ended up in Central Asia suggest profoundly painful experiences.

Norman Davies’ book Trail of Hope, a richly detailed history of the Anders army, reproduces a first-hand account of what happened to Stanisława Jasionwicz, whose family was deported to Central Asia when she was 10 years old.

“Our family was assigned to some Uzbeks who spoke no Russian at all. We communicated with them by sign language. We got one ‘room’ in their mud hut. Some responsible Uzbek came along and told us that starting at dawn the next day we were supposed to go to work, pick cotton, that is. We had an assigned quota. For us, children, it was a hard deal because we had to break open the hard shell protecting the small swab of cotton wool. Our fingers kept being bloody and we were not supposed to stain the cotton!” Jasionwicz recalled. “We were sick with dysentery and ulceration, constantly hungry and tired.”

By March 1, 1942, the Polish armed forces in the Soviet Union numbered 60,000. On July 22, 1943, Anders’ army was reformed as the Second Polish Corps of the British Armed Forces and left the Soviet Union. Later, Anders’ forces were stationed in Iran and would subsequently go on to wage the battle to liberate Italy.

More efforts recording and spreading knowledge of this chapter of history is being undertaken by Jerzy Maculewicz, the Polish apostolic administrator of the Catholic Church in Uzbekistan. Before beginning his stint in Tashkent, Maculewicz had little idea of the ties that bound Uzbekistan with his home nation.

“I never imagined that I would find a slice of Polish history in faraway Uzbekistan. This was a shock to me,” Maculewicz said.

Maculewicz said that despite all the difficulties faced by his countrymen in a distant and strange land, the exiled Poles always tried to observe their traditional rites, such as when they buried their dead. Despite fighting on the side of the atheist Soviets, the Polish divisions included Catholic priests.

“The Poles ended up in a very hot and difficult climate. And that is why all over Uzbekistan we find burial sites of Polish soldiers who weren’t killed in battle here, but died from various diseases,” Maculewicz said.

Since learning about the Polish troops, Maculewicz has scrupulously photographed their graves and compiled the pictures into two large albums. Almost all burial sites have been restored with funds from the Polish government.

A plaque in the Kanimeh district of Bukhara Region carries this plaintive dedication: “Here lie the remains of soldiers of the Polish 7th Infantry Division who died in 1942 with heavy hearts and their gaze fixed on the distant Motherland.” The headstone of a young woman buried in the town of Shakhrisabz carries a dedication, seemingly from a man called Adam, possibly her husband: “Died on April 3, 1942. This foreign land was hard for you in life, may it become light after death. My heart will never leave you.” An inscription on an obelisk at Shakhrisabz cemetery reads: “Your remains are in a foreign land, but your soul is in Poland, among your own people.”