The government hopes to turn the region into a gambling destination. 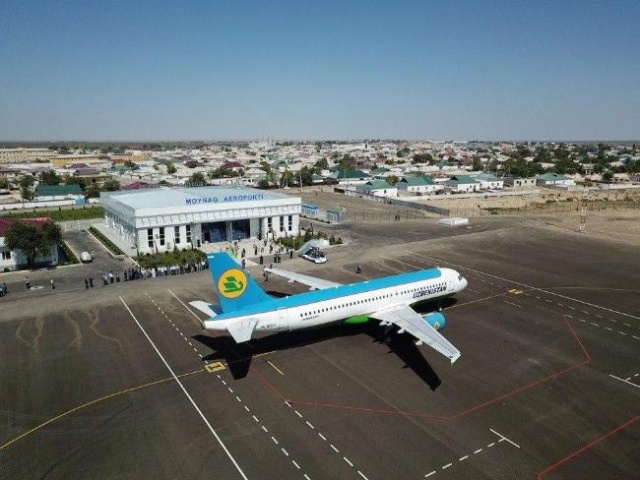 A passenger flight this week landed at a refurbished airstrip in a far-flung former fishing town on the dried-up shores of the Aral Sea in Uzbekistan – the first time that route has been used for almost 30 years.

The Uzbekistan Airlines A320 plane flew into Moynaq on August 26 on a trial run, but authorities are hopeful the route will be reestablished soon and bring tourism and investment to the region.

The route between the capital, Tashkent, and Moynaq was discontinued at the start of the 1990s as the desert region had sunken into profound economic decay as a result of the ecological cataclysm that brought about the shrinking of the Aral Sea.

Moynaq airport was built in 1947. Until 1990, it was seeing the arrival of mid-range passenger aircraft like Antonov An-24s and Yak-40s, as well as helicopters. The airport serviced around 20 flights daily from other parts of the Karakalpakstan semi-autonomous republic and three flights weekly from Tashkent.

Last January, the government again pledged to rebuild the airport and overhaul the landing strip, allocating $30 million to the project. The Transportation Ministry has told Eurasianet that this was a test flight and that work is still in progress on developing a flight roster. Reconstruction is also ongoing.

Until the 1960-70s, Moynaq was a bustling port town and the site of an extensive fleet of fishing trawlers. One important productive asset was the town’s fish canning factory. But with the rapid shrinking of the sea in the 1980s, caused by the diverting of river water for irrigating cotton fields, that industry would eventually disappear.

The shore is now around 200 kilometers from Moynaq, where a few rusting trawlers have been kept as a memorial for the dead fishing industry and the ecological disaster that led to its demise. The population has shrunk from around 30,000 to the current 11,000.

Matters took another turn in early 2017, when President Shavkat Mirziyoyev adopted a program for the economic development of the region that was to be heavily focused on the leisure industry. The revitalization blueprint pledged to grant businesses setting up in the area with long-term tax breaks up until 2027.

Speaking in November 2016, Mirziyoyev had floated the idea of setting up gambling facilities in Karakalpakstan, and the idea received expressions of interest from Middle Eastern investors.

In July 2017, a 101-kilometer water supply system was launched with a capacity to carry 7,000 cubic meters of clean water daily to Moynaq. Residents were previously reliant on drawing water from what was left of the Amu-Darya River or wells.