Rashid Kadyrov is one of three ex-General Prosecutors now behind bars. 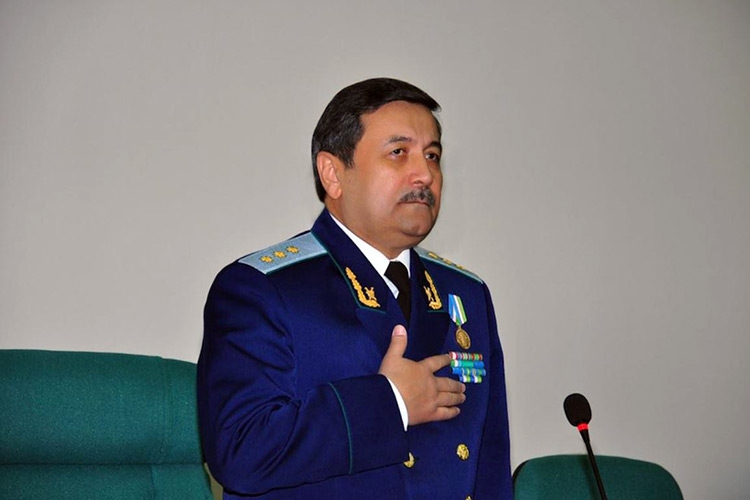 Uzbekistan’s Supreme Court says that a former General Prosecutor arrested last year on corruption charges has been sentenced to 10 years in prison and fined $12,000.

Tashkent city court found in its verdict, reported on June 26, that Rashid Kadyrov had from 2000 to 2015, during his tenure as the country’s leading prosecutor, conspired with another dozen people, many of them also high-ranking officials, to extort bribes, engage in extortion, impede criminal investigations and launder illegal earned money.

President Shavkat Mirziyoyev has taken a publicly ferocious stance on what he says is the corruption riddling the procuracy.

Kadyrov is just one of three General Prosecutors that have been jailed in Uzbekistan over the past couple of years. Just last week, Otabek Murodov, who had filled the position since last January, was arrested, also for graft. Ikhtiyor Abdullayev – Kadyrov’s successor and Murodov’s predecessor – is believed to have been arrested in February and is now under investigation.

Kadyrov was taken into custody in February 2018 while attempting to leave the country from Tashkent international airport.

The Supreme Court said that around 200 witnesses gave testimony during his trial. The other leading defendants were given sentences ranging from 13 to 19 years in prison.

Money confiscated over the course of investigations will be repurposed as compensation for the economic damage caused by Kadyrov and his accomplices, the court said.

While Uzbekistan may wish to claim this as a blow against graft, there are also some concerns about the fairness of the trial, which was held behind closed doors and which even relatives of the accused could not attend —and the treatment reserved for Kadyrov.

Amnesty International in April issued an appeal for the Uzbek government to intervene following allegations Kadyrov had been subjected to “physical abuse, death threats, sleep deprivation and threats against his relatives” since he was detained.

“A witness who requested anonymity saw [Kadyrov] in detention in August 2018 and reported that [he] had a long furrow on his neck, which he believes was a sign of strangulation,” Amnesty said in its April 8 statement.

In an unusual development, the prosecutor’s office in Tashkent responded to the claims, insisting that medics who examined Kadyrov found no evidence of physical injuries.

“In light of the age of Kadyrov and his co-defendants, their state of health has been placed under constant supervision from Interior Ministry medical personnel,” the General Prosecutor’s Office said in a statement.