Uzbekistan Gears Up to Vote for Rubberstamp Parliament 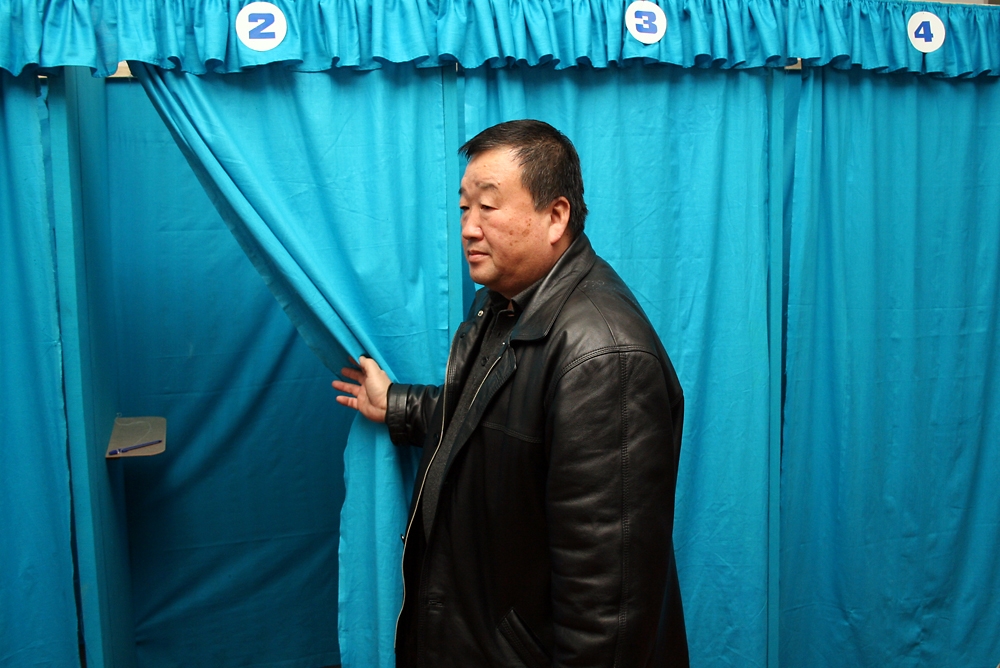 The chairman of a Tashkent polling station opens a curtain to a voting booth during the Uzbek presidential election of December 2007. Uzbekistan’s Dec. 21 parliamentary elections feature only four staunchly pro-regime parties to fill the 150-seat lower house, or the Legislative Chamber. No opposition parties are permitted to legally exist in Uzbekistan, and independent candidates are barred from standing. (Photo: OSCE)

Uzbekistan's parliamentary elections on December 21 will offer voters a choice, but no hope for change.

No opposition parties are permitted to legally exist in Uzbekistan, and independent candidates are barred from standing.

“The state of political freedoms [in Uzbekistan] is non-existent,” Steve Swerdlow, Central Asia researcher at Human Rights Watch, told EurasiaNet.org. “Genuinely independent voices have not been allowed to register and participate in this election, as in all previous ones.”

HRW and other watchdog groups routinely rank Uzbekistan as among the most repressive states on earth. That reputation is not stopping strongman President Islam Karimov from touting this election as evidence that Uzbekistan – which he has led for over two decades, brooking no opposition to his iron rule – is on the path to democracy.

Uzbekistan is “building an independent democratic state” and “creating a civil society” that prioritizes “human interests, rights, and freedoms and the supremacy of the law,” he claimed in his Constitution Day speech earlier in December.

Critics say Karimov is merely attempting to add a democratic veneer to a dictatorial system. Thousands of political prisoners are languishing in jail, the media is muzzled, and most civil society activists are “either in prison or in exile,” said Nadejda Atayeva, a France-based human rights campaigner exiled from Uzbekistan.

“The Uzbek government is doing all it can to portray this election as legitimate, without actually making it legitimate – without making the election free and fair,” Swerdlow says, adding that Tashkent is harnessing the vote “as an act of consolidation and public mobilization around the regime.”

Observers expect a high turnout. “Uzbekistan has never had free and fair elections, but the government will ensure that the turnout is sufficiently high,” Alexander Melikishvili, a Washington-based analyst at the IHS Country Risk think-tank, told EurasiaNet.org. “The government will organize voting drives among public sector employees, and local administrations will compel people to vote through the community (mahalla) councils.”

Voters in Uzbekistan readily acknowledge that mahallas – state-sponsored residents’ councils that control local affairs – rely on coercive measures to get out the vote. “Mahalla committees will be going round the houses asking people to go to vote,” one Tashkent-based businessman told EurasiaNet.org on condition of anonymity. “That’s exactly what happened last time there were parliamentary elections.”

The public will dutifully turn up at polling booths to avoid reprisals, he added, but will cast their votes without enthusiasm. “People have gotten used to all these elections as something staged, and they don’t really care what the outcome will be, because most people think it will all be the way the authorities want it to be,” he said.

In practical terms, the parliamentary elections mean little for day-to-day affairs in Uzbekistan. As David Dalton, an Uzbekistan analyst at the London-based Economist Intelligence Unit, points out, “Voting to parliament is heavily controlled, and the real levers of power are anyway located elsewhere.”

International observers will be in Uzbekistan on election day, but the Office for Democratic Institutions and Human Rights, or ODIHR, the election-monitoring arm of the Organization for Security and Cooperation in Europe, will field only a limited mission, partly due to what it describes as “the limited nature of the competition” in the election.

ODIHR has never deemed conditions conducive to sending a full observation mission to Uzbekistan, or judged an election in the Central Asian nation to be free and fair.

Meanwhile, Karimov has been on what Swerdlow describes as a “media blitz” in an attempt to legitimize “an electoral process that’s genuine in form, but not in substance.”

That may be designed to help bolster the legitimacy of another, far more important vote next year: a presidential election due in the spring, in which Karimov has not stated if he will stand, although he has hinted he will.