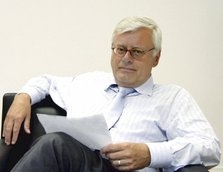 Germany's Ambassador Wolfgang Neuen held a meeting at Uzbekistan's Foreign Ministry yesterday, uzdaily.uz reported. While the pro-government web site didn't disclose the nature of the talks, no doubt the German ambassador was expressing unhappiness about the recent heavy-handed tactics Uzbek authorities deployed against a German business -- and possibly himself.

On July 27, armed Uzbek special forces swooped down on a German baked goods factory in Yangiyul, about 30 kilometers outside of Tashkent, and also raided the bakery's offices in the capital, fergananews.com reported. When Ambassador Neuen went to see what was going on at the company's head office, he was reportedly seized and blocked from entry to the building, says fergananews.com.

On August 3, Germany sent a note verbale to the Uzbek Embassy in Berlin, protesting the raid against the German bakery. Berlin evidently made it clear in no uncertain terms that the raid was unacceptable, and contradicted various international and bilateral agreements.

On August 5, another German note verbale went to the Uzbek Foreign Ministry and also to the president and prime minister, and Steinert Industries, owner of the bakery, has also filed protests with the prosecutor's office and the security ministry.

Journalists from fergananews.com obtained a copy of the German complaint to Uzbek authorities which details beating and handcuffing of employees, and destruction of computer hard drives and surveillance videos.

Two articles about the incident were published on the semi-official website uzmetronom.com, a site blocked from view in Uzbekistan but which often publishes stories leaked by state officials. The second article was removed apparently under pressure from the government.

The factory, known by its local brand name "Tasty Bread," was acquired by Steinert Industries along with baking equipment for $45,500 after it was put in bankruptcy. Steinert completely refurbished the building at a cost of $800,000, and installed modern equipment manufactured in Russia in order to serve 15 of its own stores -- all of which were subsequently closed by Uzbek authorities.

According to unnamed sources cited by uzmetronom.com, Uzbekistan's National Security Service made the decision to raid the plant, despite the owner's protests that such action violated a bilateral agreement on protection of investments.

Major R. Siddikov of Uzbekistan's National Security Service led the operation, and showed no search warrants or other authorization. Reportedly, 20 security police beat up employees and destroyed equipment in the course of the raids, and also siphoned off fuel from cars and stole mobile phones and bread loaves. The factory was also shut down in mid-process, causing hundreds of thousands of dollars in losses, and then sealed.

Uzmetronom.com subsequently published an article -- later removed from its website for unknown reasons but re-printed by fergananews.com -- that claimed that the German ambassador arrived on the scene as the raid was in progress and himself was seized by security agents and held for an hour and a half. When the diplomat tried to move, the agents shouted at him rudely to stay put. There was no confirmation of this story, but rumors that the German diplomat was "roughed up" by Uzbek security have been circulating in the foreign community in Tashkent.

The German Embassy, which has long enjoyed close cooperation with Uzbekistan despite recent difficulties for German corporations, has remained silent about the incident. While German trade delegations have been welcomed in Tashkent, a German parliamentary visit was cancelled after MPs and Germany's human rights commissioner complained about human rights violations in Uzbekistan.

Major Siddikov was also reported to appear in uniform at Superior Economic Court in Tashkent on August 4, allegedly to place pressure on a judge who was reviewing a lawsuit from the company seeking return of funds overpaid for gas.