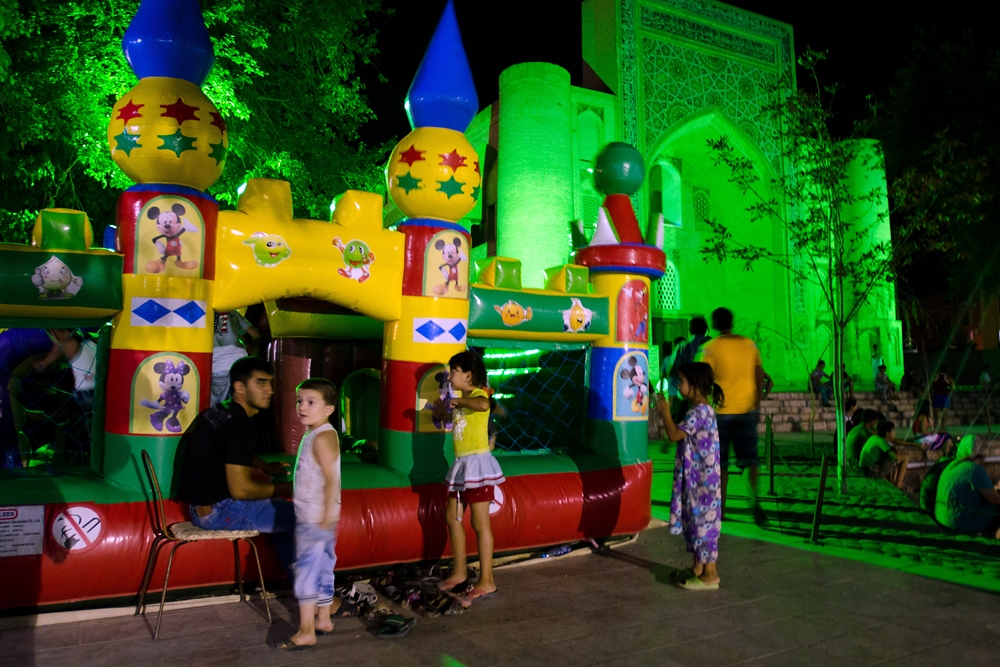 Children play in an inflatable bounce playground during the evening in the Lyabi Khauz square of Bukhara. 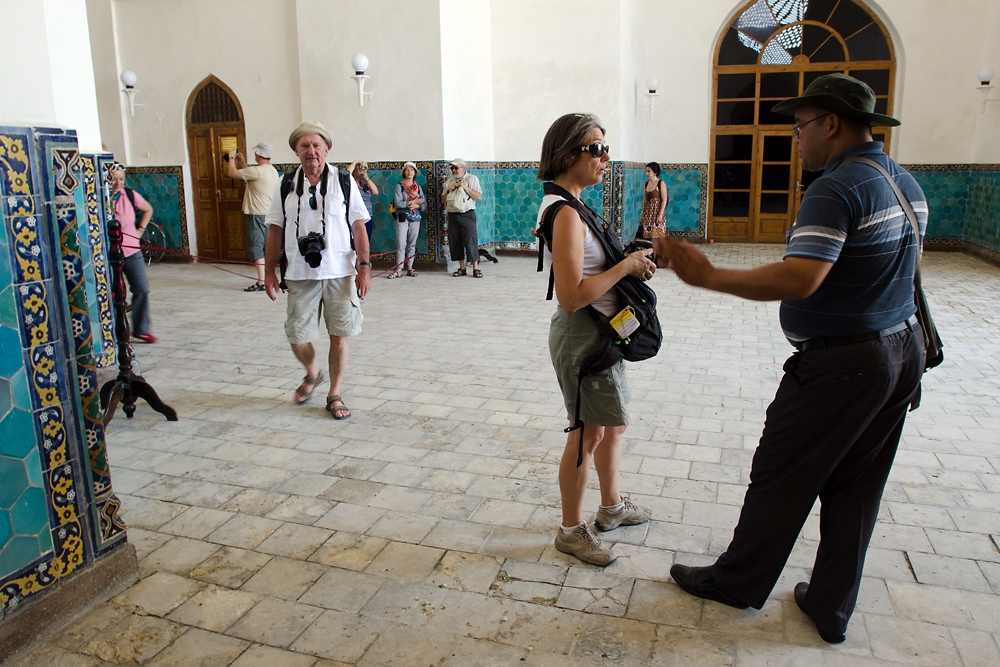 A tour group visits the Kalyan mosque, which is part of the Poi-Kalyan ensemble, including Bukhara's iconic Kalyan Minaret. 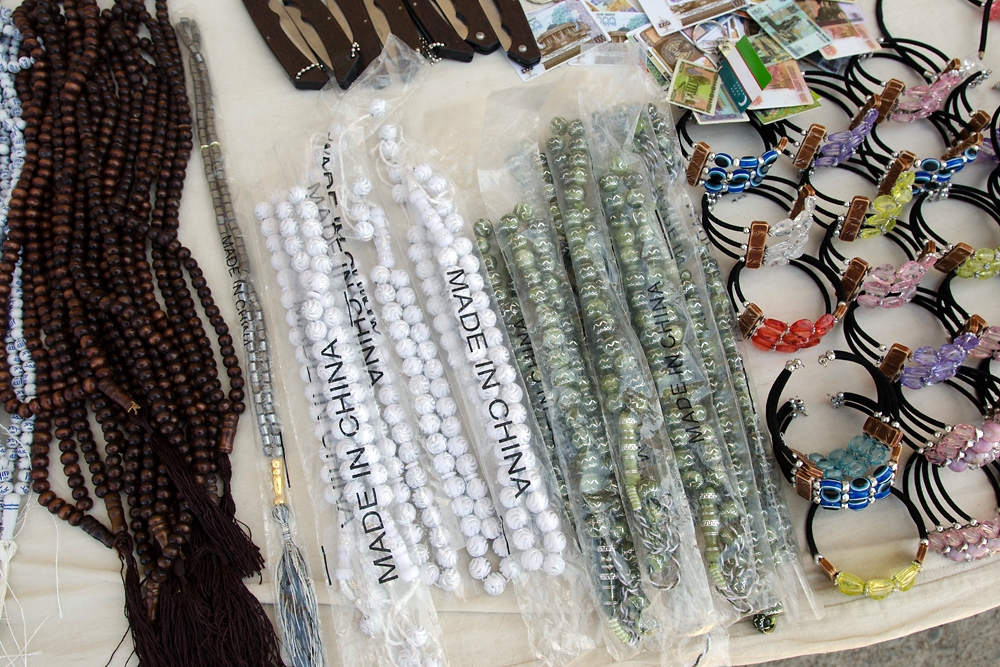 Plastic bracelets, necklaces, and trinkets labeled as 'Made in China' are sold on blankets outside the Kalyan Madrassa. 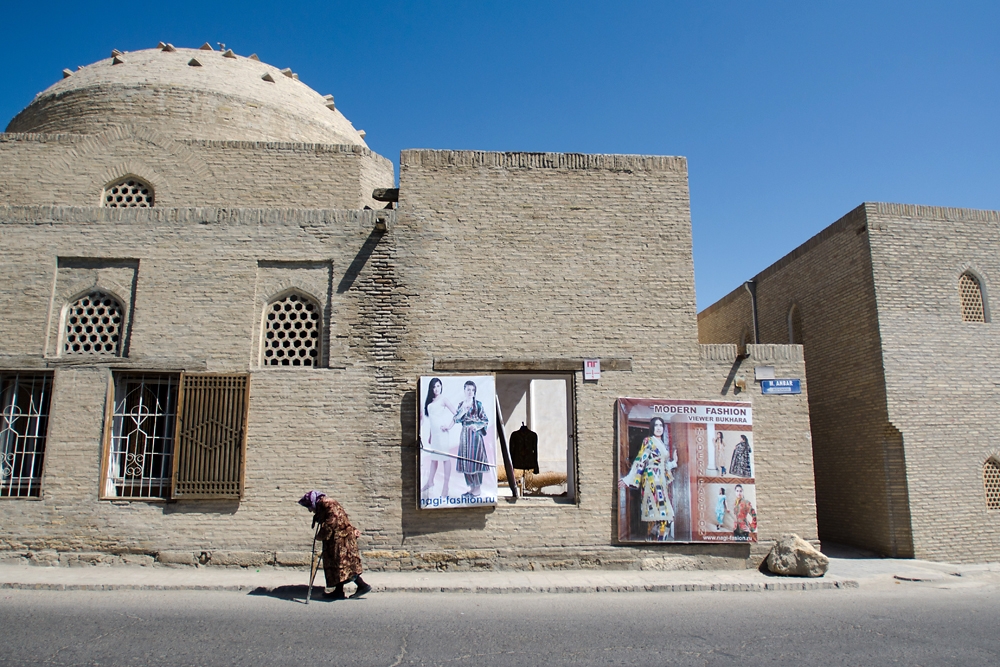 Billboards nailed onto one of the city center's old brick buildings advertise a clothing store. 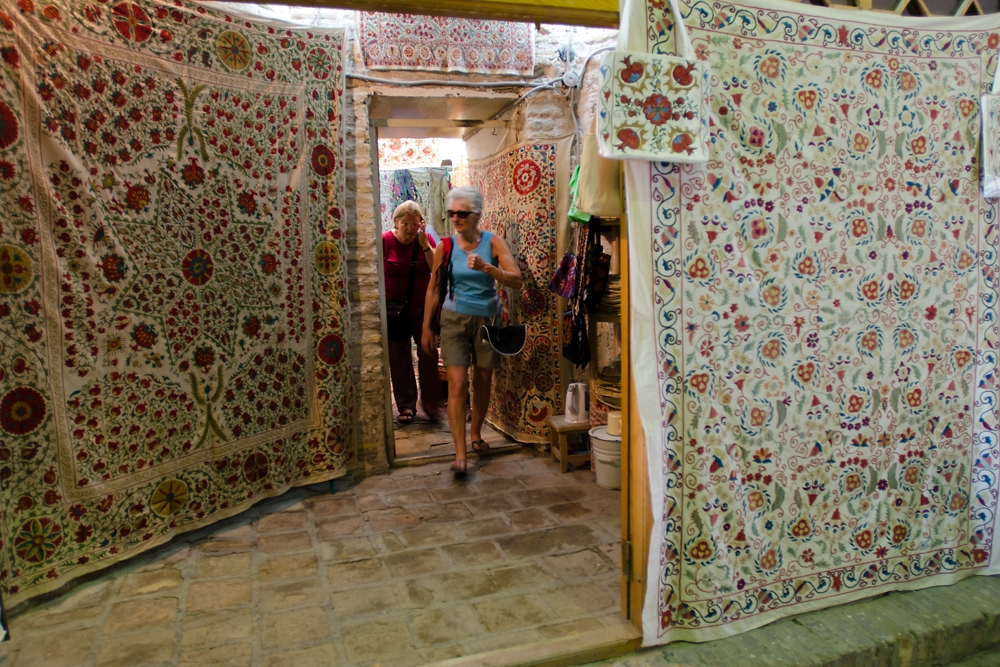 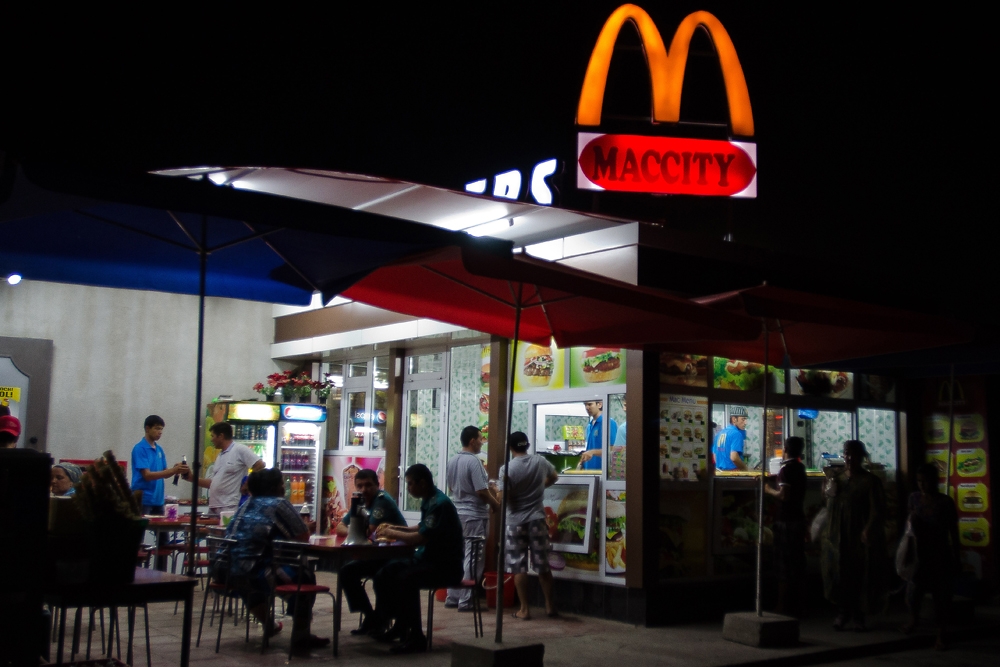 Close to the Bukhara citadel known as the Ark, Uzbeks visit a fast-food diner modeled after a Western restaurant chain. 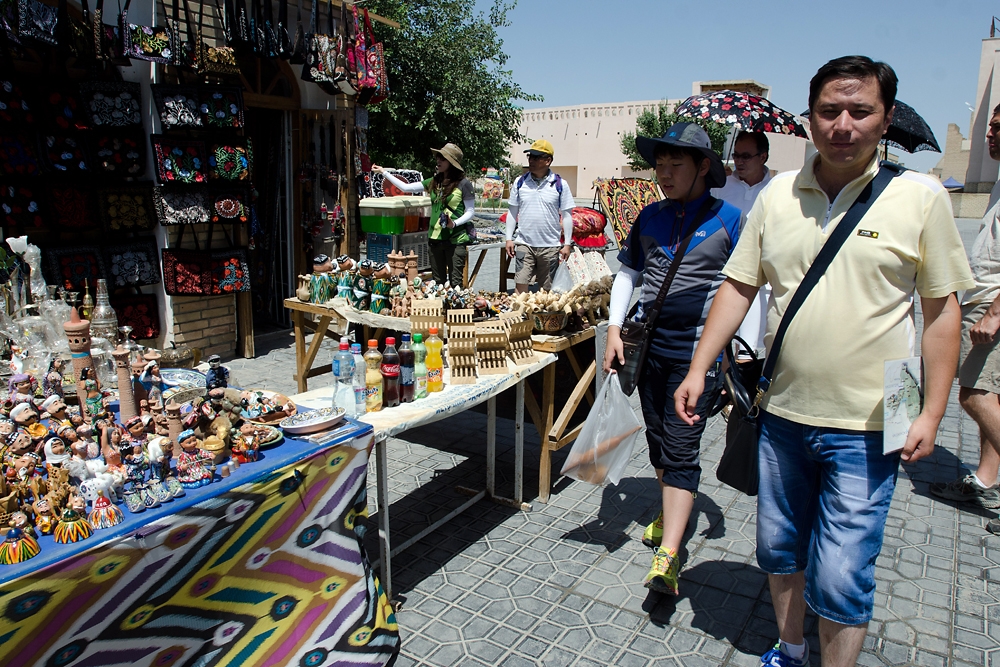 Tourists stroll along a pedestrian walkway flanked by collapsable tables stacked with souvenirs and trinkets. 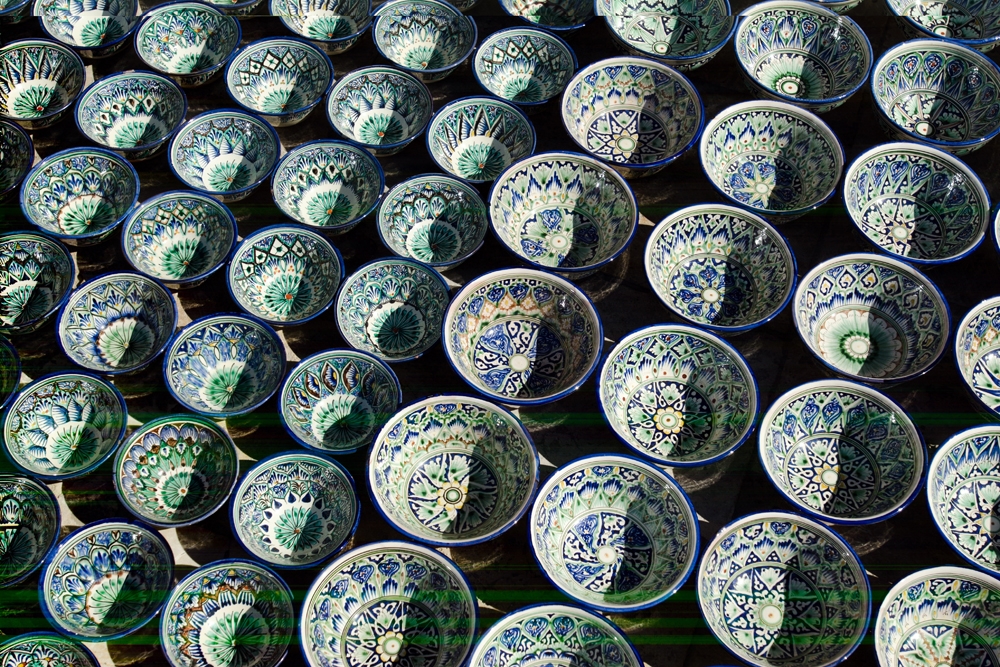 Hundreds of glazed ceramic bowls and cups are stacked up for sale to tourists outside the Poi-Kalyan ensemble. 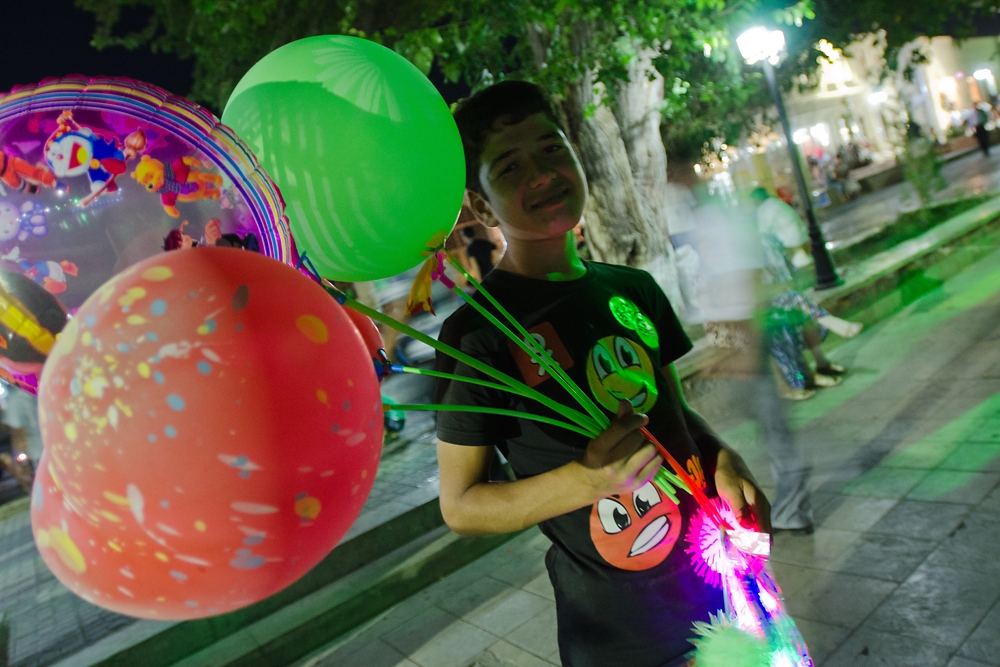 A boy sells balloons and neon glow sticks near the Lyabi Khauz reservoir. 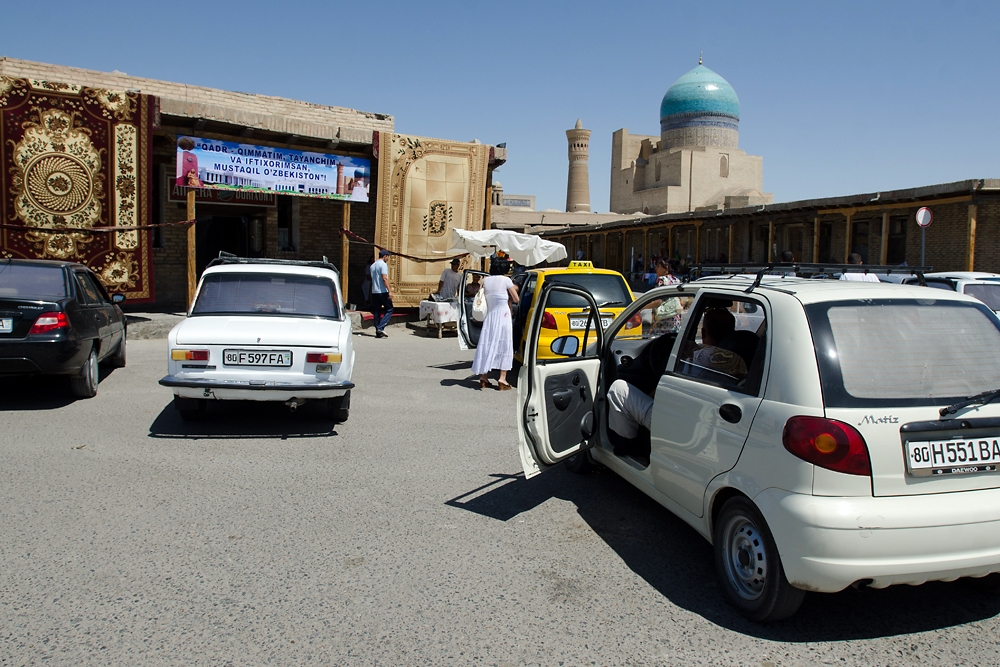 Machine-made rugs with 'Made in Germany' labels hang outside tourist shops near the Kalyan mosque. 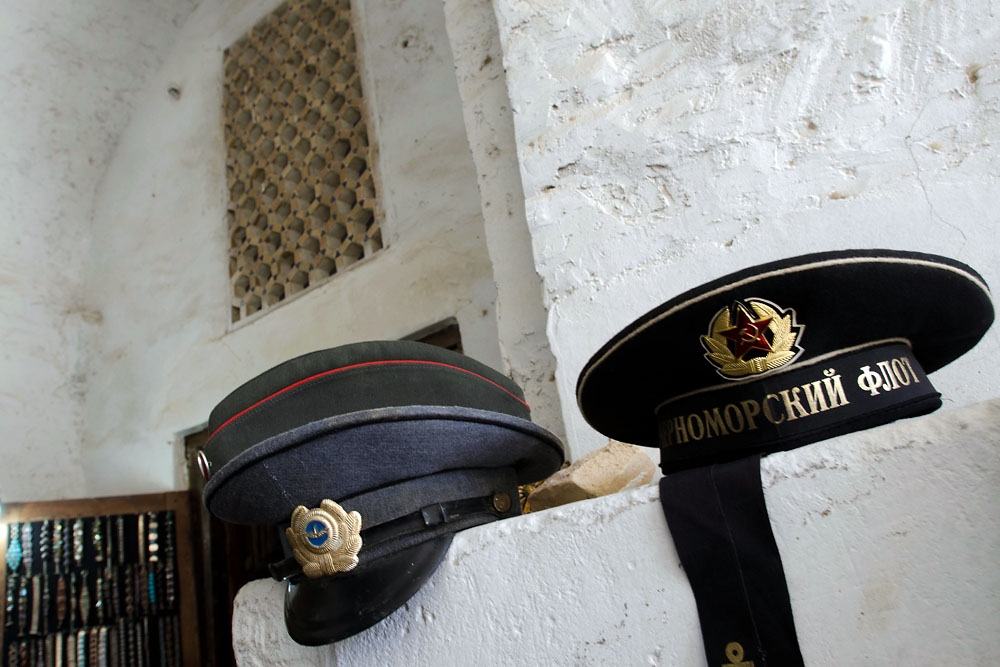 Soviet-era memorabilia are sold inside the Abdullazizkhan Madrassa. 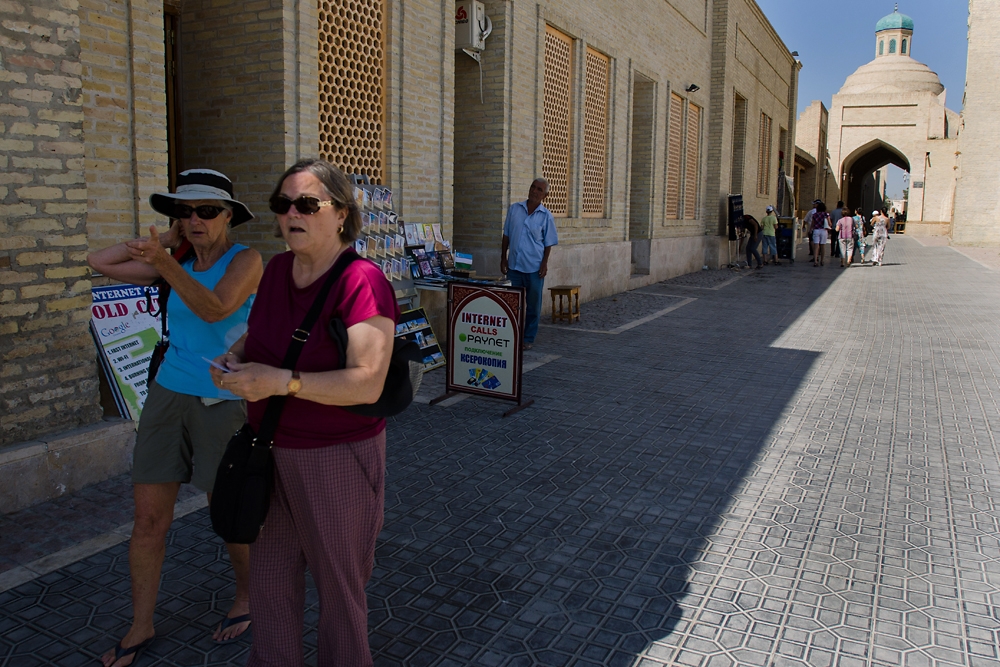 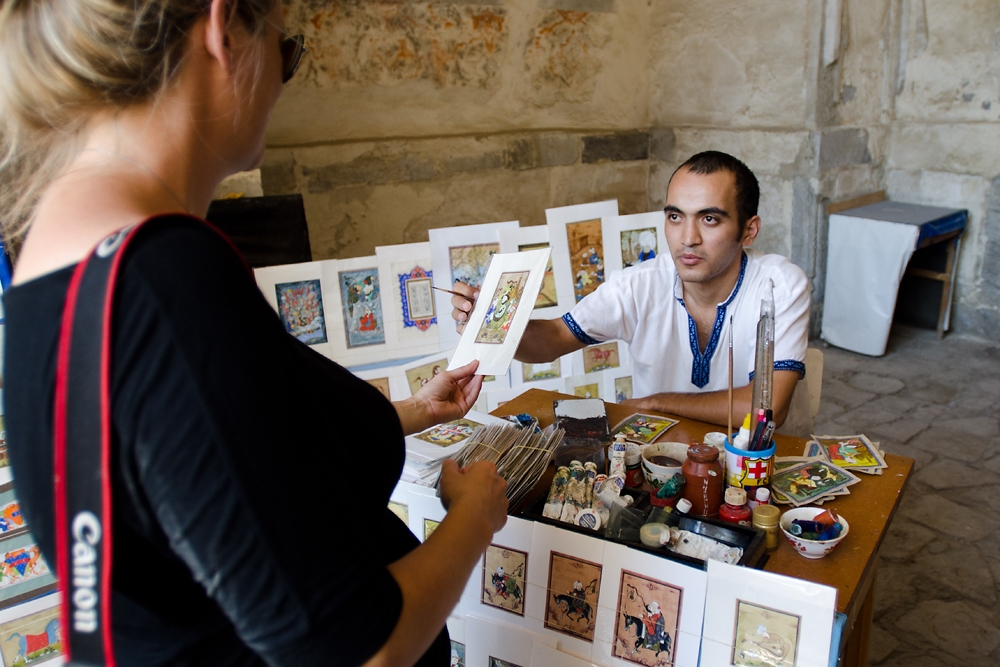 An American tourist haggles with a painter of Silk Road scenes inside his shop in the Abdullazizkhan Madrassa. 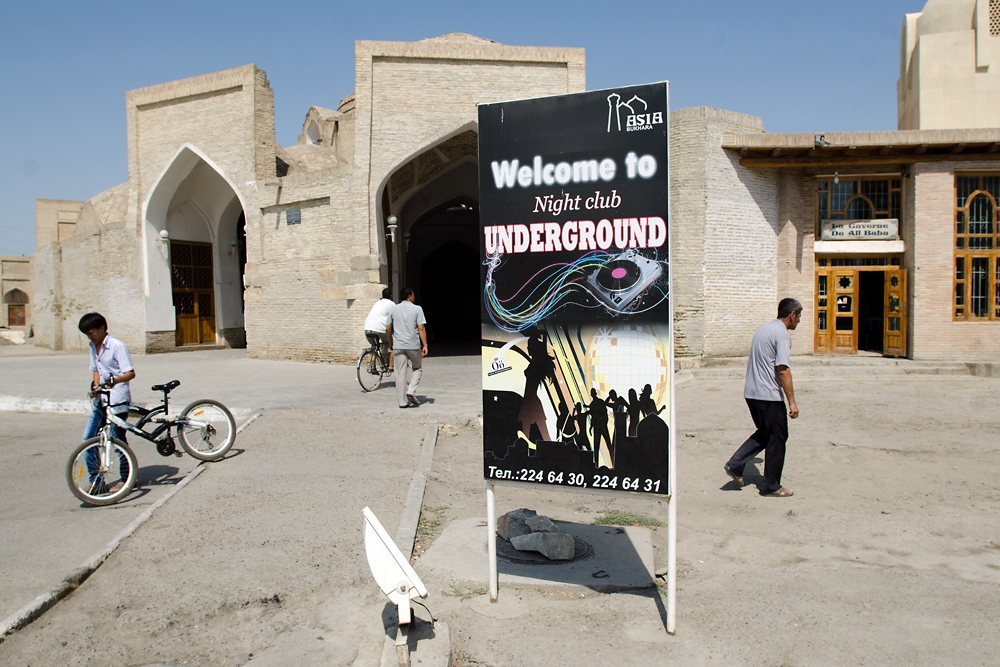 Outside one of the Bukhara trading domes a board advertises a nightclub in the Asia Bukhara Hotel. 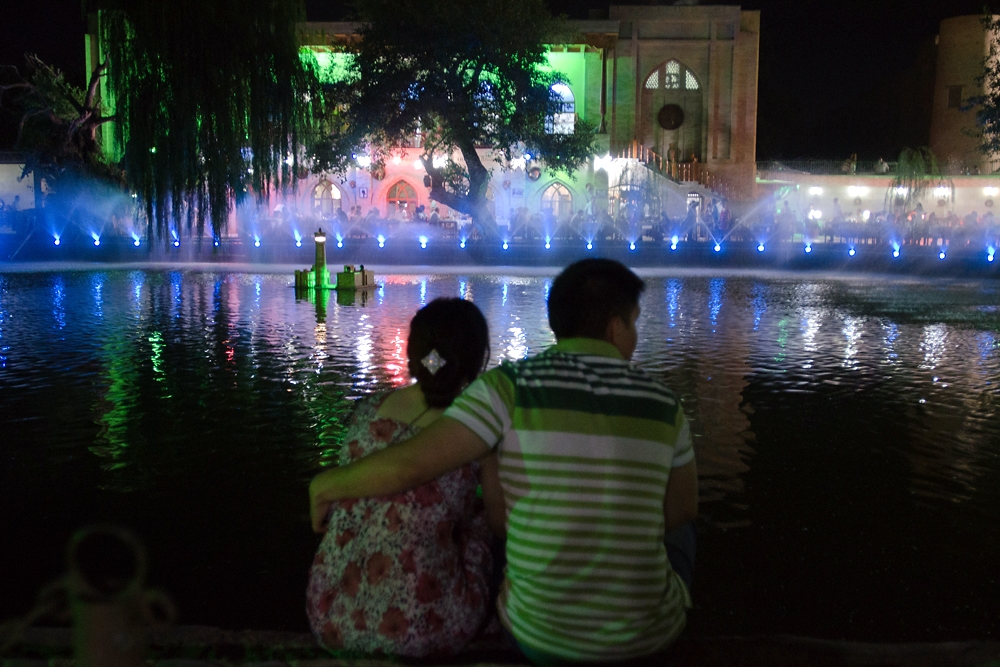 In the evening, local couples gather at the Lyabi Khauz reservoir lit with a rainbow of colors. 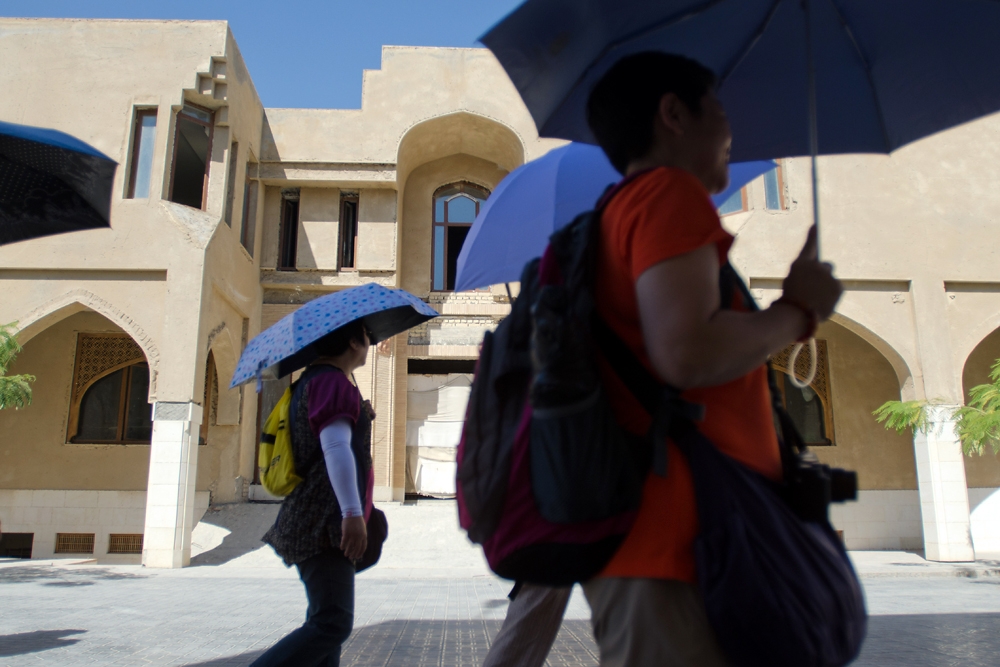 Seeking shade under umbrellas, tourists walk past a hotel under construction and designed to look like the city's old buildings. 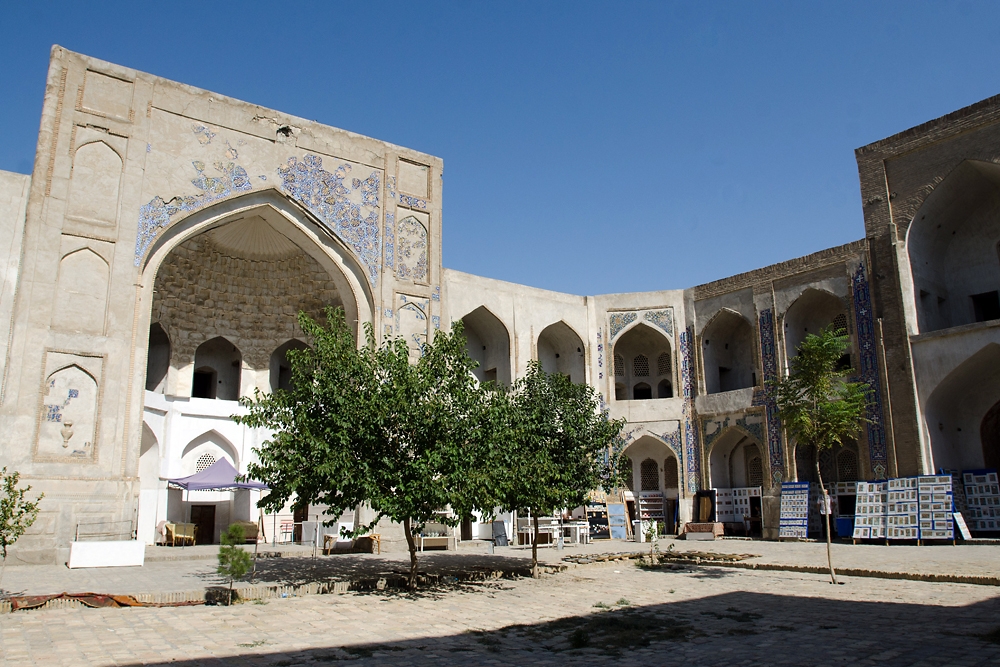 Souvenir sellers have temporary stalls set up in the courtyard and in the prayer rooms of the Abdullazizkhan Madrassa. 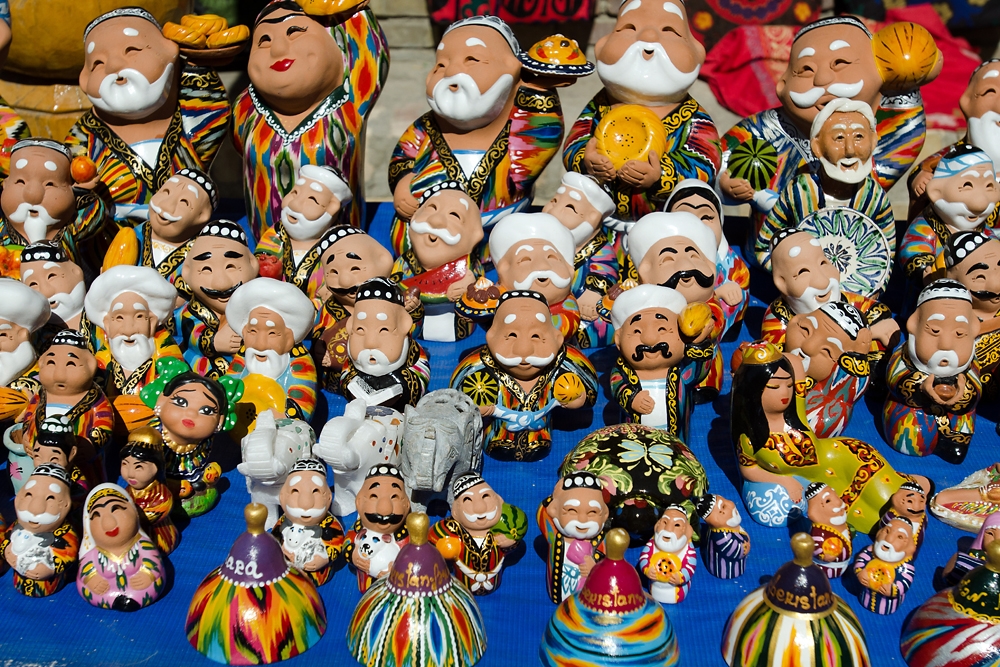 Painted ceramic figurines are for sale on a pedestrian walkway between two of the ancient trading domes. 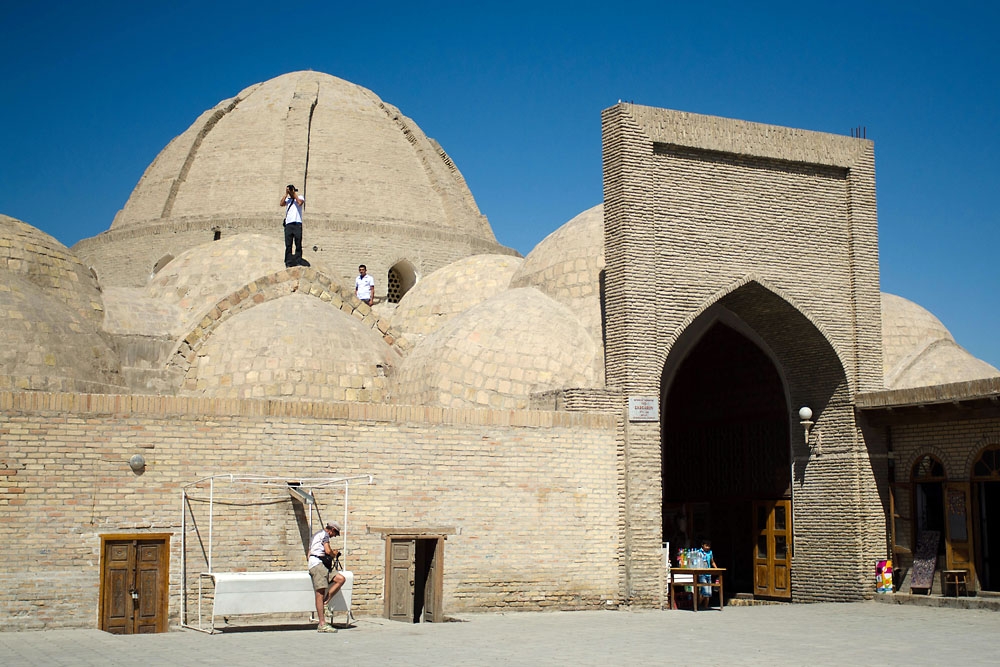 A tourist walks on the arched brick roof of a trading dome to get a birds-eye photo of Bukhara. 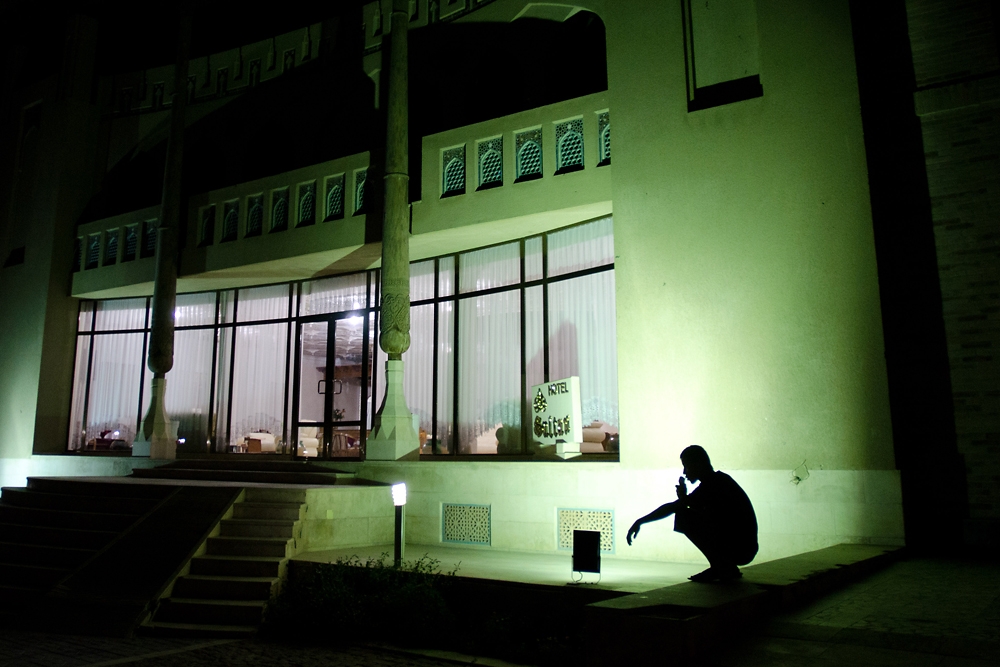 A man enjoys an ice cream late in the evening outside the Sultan Hotel on Lyabi Khauz square.
prev
next

After nightfall in Bukhara, floodlights illuminate the madrassas, mosques, and century-old buildings surrounding the Lyabi Khauz water reservoir, bathing the structures in neon colors of green, yellow, blue and red.

The garish lighting is but one of over a hundred examples in which officials “modernized” architectural monuments with the aim of making them more appealing to tourists. But ask foreign visitors, and many say such “modernization” efforts tend to taint the city’s feeling of authenticity.

“It’s too much. There’s so much kitsch,” a Hong Kong tourist said while strolling between rows of souvenir stalls connecting two trading domes. “It’s not what I expected.”

As Uzbekistan continues to open itself to a growing and lucrative tourism industry, the stewardship of its main attractions, in particular in Bukhara, is open to criticism. Commercial pressures seem to be steamrolling the spirit of preservation.

Many of the historically significant mosques and madrassas in the historic center are being turned into souvenir shops hawking cheap plastic trinkets, Soviet-era memorabilia, and machine-made carpets from other countries. The four ancient covered bazaars known as trading domes – once used for trading currency, jewelry, carpets or books – have been converted into stalls selling souvenirs ranging from brightly-painted ceramic camels and Bukhara refrigerator magnets to shoddy musical instruments and postcard-sized scenes of Silk Road traders from centuries ago.

In selecting Bukhara for the World Heritage list back in the early 1990s, UNESCO described the city as “the most complete and unspoiled example of a medieval Central Asian town which has preserved its urban fabric to the present day” and that “Bukhara retains much of its historic ambience.”

In the two decades since getting the UNESCO designation, much of that Silk Road ambience appears to be giving way to mass-produced suzani carpets, which are hand-embroidered textiles of cotton and silk common in Central Asian countries, and evening lights turning the blue-tiled Islamic religious buildings into rainbow-colored spectacles.

“There’s too much happening here too quickly,” seller Shukhrat said while pointing at a new hotel near the end of construction across the pedestrian walkway from the Tim Abdulakhan carpet market. He said Russian investors in the hotel were copying the style and look of the old town center to try to make the new building look as if it were actually several hundred years old. “It’s not right,” he added.

Bukhara is one of Uzbekistan’s key tourist destinations. According to Uzbektourism, the country’s official tourism agency, shortly after Uzbekistan’s independence from the Soviet Union, Bukhara had four hotels. Twenty years later the city of a quarter million inhabitants now has more than 70 hotels capable of accommodating more than 2,800 guests. Overall in Uzbekistan, official statistics show the number of foreign travelers grew from less than 100,000 in 1995 to almost 2 million last year.

Near Bukhara’s Khodja Gaukushan complex of a 16th-century mosque and 16th-century madrassa, several dozen sellers randomly lay down blankets to display hundreds of glazed ceramic bowls and cups, plastic bracelets and necklaces with ‘Made in China’ labels, and cloth camel bags treated to look old and worn.

Many old and historic buildings have posters and billboards advertising modern fashions and imported soft drinks. In small shops, constructed with similar light-tan bricks to emulate the look and feel of the old town, tourists can buy internet calling cards and exchange money on the black market at a 30 percent premium.

Tourists are often lured into paying additional fees for entrance into “secret” parts of madrassas and mosques. Several of the most historic sites are unmonitored, allowing visitors access onto restricted rooftops of madrassas and delicate arched domes of the 500-year-old mercantile centers.

Michellia Uang, a financial analyst visiting Bukhara from New York in July 2013, said her first impression of the lights and loud music emanating from local restaurants around the Lyabi Khauz center of the old town reminded her of Las Vegas.

“It was terrible,” she said. But after hiring a local guide to tell her about the summer palace, visiting a mosque 30 minutes outside of the center, and exploring several of the madrassas, while avoiding the tourist traps, she said she discovered the ancient city she was expecting.

“(Late) at night, I passed by [Lyabi Khauz] again. The restaurants were closed and the green lights were turned off,” Uang said. “It was quiet, and in the dark only a few people were walking on the streets. That was the moment I felt the true Bukhara.”