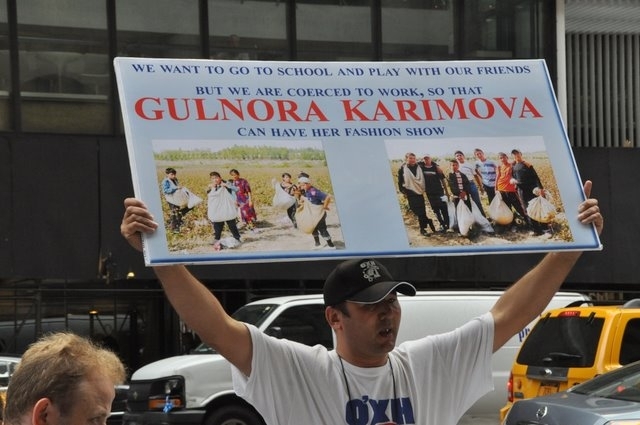 Fashion scenesters in Manhattan today were suddenly confronted with an issue half a world away in Uzbekistan -- forced child labor in Tashkent’s billion-dollar cotton industry.

Labor and human rights activists originally scheduled a picket at Lincoln Center weeks ago when Karimova surfaced on the schedule for Fashion Week, sponsored by Mercedes Benz, which enjoys a lucrative joint venture with Uzbekistan to sell vehicles.

But IMG, the organizers of Fashion Week, said they were "horrified" to learn from Human Rights Watch of the torture and political imprisonment in Uzbekistan as well as the used of forced child labor, the New York Post reported.

A spokesman for Karimova's Guli fashion line said that the show was being relocated "for security reasons," invoking the 10th anniversary of terrorist attacks on the US, the Post reported. IMG did not respond to a request for comment, but the Post quoted sources denying the security angle. Gulnara herself appeared to be missing in action -- disgruntled models and a prominent hairdresser were inconvenienced without the director of their show.

Police requested that a dozen demonstrators at Lincoln Center move across the street from the entrance, making their action less visible. So they decamped to Cipriani, where they found that Uzbek émigrés and members of the International Labor Rights Forum (ILRF) were already pacing the sidewalk in front of the marbled entrance, chanting "Hey hey ho ho, child labor's got to go!" and "We won't buy it, we don't want it! Uzbek cotton makes us vomit!"

As some demonstrators stood with large posters depicting children hunched over cotton bolls in Uzbekistan, some of the US labor activists' young children, dressed in campaign t-shirts and sandals and carrying bags of cotton, handed out flyers.

Islomiddin Dolimov, a refugee from Uzbekistan and chairman of the US branch of the Uzbekistan People’s Movement (UPM), said he and other group members had driven from Arizona where they now reside. A witness to the government massacre of demonstrators in Andijan in 2005, Dolimov said he had been forced to leave his family behind still exposed to police harassment.

"They are under pressure and summoned to the police for interrogation every week," he said, yet he felt he had to speak out on behalf of the many victims of Uzbek government oppression.

Yusuf Sobirov, another UPM member, said his daughters had been forced to pick cotton since the ages of 8 or 9, and were still mobilized from college to work long hours in the fields.

“Children and students can work from 8 or 9 hours to 14 hours a day, and depending on their age and hours worked, they might pick up to 100 pounds and earn only the equivalent of $2.50 to $5.00 a day -- from which they have to pay for their own meals and transportation,” Sobirov said

Cipriani turned out several rows of security men, the NYPD set up gates and kept a patrol car nearby, and at least one hefty Russian-speaking dark-suited fellow was busy photographing the demonstrators and saying "no comment" to queries about his affiliation.

The faces of many passers-by lit up in recognition when they saw the protest posters -- it turned out they were now familiar with the story of the disgraced dictator's daughter from reading the popular Post. The Post has had the scoop on Gulnara's doings all week. Reporter James Covert, who hadn't covered either fashion or foreign policy in the past, evidently found the convergence of the human rights and fashion topics on his city beat to be compelling.

Many of the fashionably-dressed guests of the Guli show took leaflets from the demonstrators and said they were just becoming aware of the issue, and a few tottering on high heels ducked in embarrassment. One patron began arguing with a protestor about the need for "stability" provided by strong-armed rule. Uzbek officials deny the exploitation of children in the cotton industry, but have refused to permit the International Labor Organization to send in monitors during the harvest season.

An activist who requested anonymity said she had managed to get a ticket to the show and smuggled herself in to the hall. Yet Gulnara -- who cuts an unmistakable figure -- was nowhere in evidence in the half-empty room and never appeared on stage with the models. The activist overheard a Guli representative in heated discussion with an unidentified female reporter, who was finally ushered backstage after indicating she would cover “her side of the story.” The activist described the audience as “mainly an older crowd with many Uzbeks and perhaps some heiresses and maybe some Armani people." Audience members told her they had heard the show was moved due to concerns about “terrorism and 9/11.”

Tim Newman, an ILRF organizer, told EurasiaNet that while this week, Karimova was a focus, he was hoping people would look at the broader goal of ending the purchase of cotton produced using child labor.

"Throughout the last week, we've sent a clear message to Gulnara that we -- the consumers here -- are concerned with what's going on in Uzbekistan," he said.

More than 60 companies and a major apparels association have pledged not to source their cotton in Uzbekistan, says Responsible Sourcing Network (RSN), a commitment activists say is significant.

"The Tashkent cotton fair is coming up in October, so we need to make sure that their suppliers down to the bottom of the supply chain are respecting the ban,” added Newman.

Gulnara’s show fizzled in less than an hour, and reporters and protestors outside were still unable to confirm she had ever been there, as rumors circulated that she was still in Europe.