Uzbekistan: Heartbreak and despair for expat laborers trapped by COVID

Tens of thousands of Uzbek workers are trying to get home. In Uzbekistan itself, however, not everybody is eager to see them. 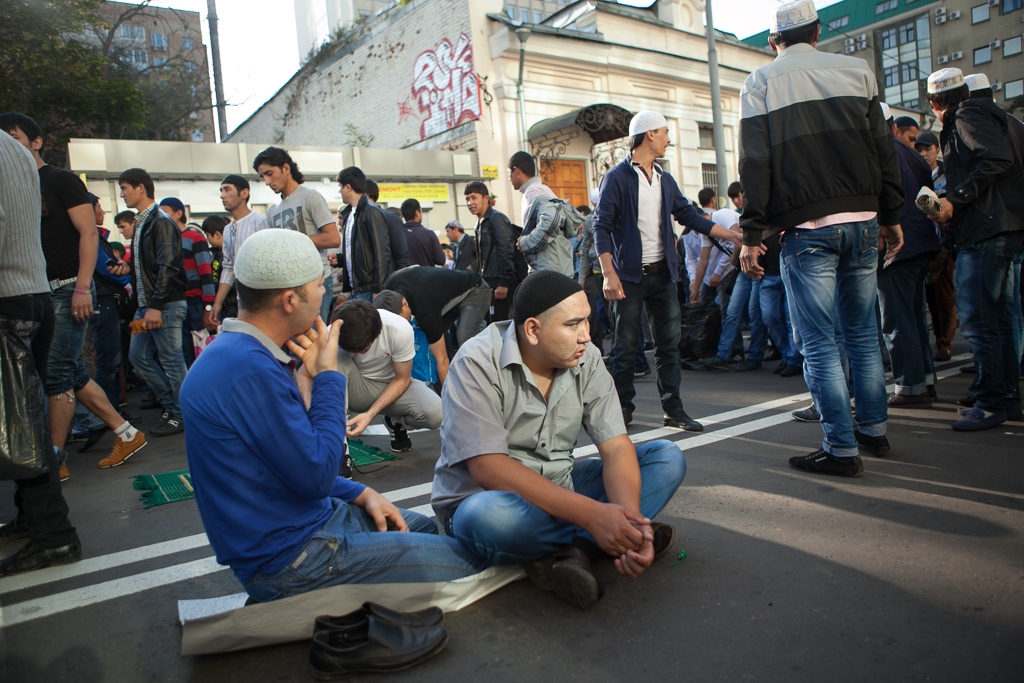 Which way to go? Migrant workers in Moscow (photos by David Trilling)

It has been two years since Fazliddin and Sogdina last saw their mother and father, who left their native Uzbekistan to work in Russia.

Their return, which was due in April, never happened. The coronavirus pandemic is, of course, to blame.

This has been especially crushing for nine-year-old Fazliddin, who completed third grade with top marks. He had been looking forward to basking in his father’s pride at year-end school ceremonies.

Their precious shared mobile phone is Fazliddin and 12-year-old Sogdina’s only link to their mother and father, who had jobs in a supermarket and warehouse in Moscow, respectively. The children are being brought up by a grandparent and live in a village in the Kashkadarya region.

“Often, I will grab the phone off [my sister] and run away, and she starts crying,” confessed Fazliddin. “Dad and mom promised to bring me a new phone, but they haven’t come back yet.”

Fazliddin’s lament to his grandmother, Mavjuda Nusratova, is constant: “When are mom and dad coming back?”

Countless families in Uzbekistan are enduring similar dramas. Millions of Uzbeks live abroad for work – mostly in Russia, but also in Kazakhstan and Turkey, and even in South Korea. In January, Valentina Matviyenko, the speaker of Russia’s upper house of parliament, said during a visit to Tashkent that 2.2 million Uzbek nationals live and work across Russia.

The first confirmation of a COVID-19 case in Uzbekistan came on March 15. One day later, the authorities suspended air and rail travel. That rapid reaction immediately precipitated a swell of appeals to Uzbek diplomatic missions for assistance in returning home – around 65,000 have sought such help in Russia alone.

On May 7, President Shavkat Mirziyoyev pledged that plans had been drawn up to bring 11,000 fellow Uzbeks. Numbers soon swelled, however. By May 19, the number of returnees had already reached 39,000.

The scramble to return home stems in part from the dramatic impact of the coronavirus crisis on the labor market. Remittance figures tell their own story of job losses and rapidly declining incomes. From January to April, a period that mostly predates the peak of Russia’s own coronavirus crisis, $1.3 billion was transferred by individuals to Uzbekistan. That was 11 percent less than in the same period in 2019.

No less pressing is the epidemiological risk entailed in remaining in Russia for people often forced to live in cramped conditions where social distancing is impossible.

“It is clear that foreign nationals are an at-risk group,” said Sergei Abashin, a Central Asia scholar based in St. Petersburg. “It is difficult for them to abide by isolation measures. They do not have jobs and cannot work remotely. They have limited access to medical services because they do not have health insurance.”

Outbreaks in crowded habitations are inevitable. One episode occurred in late May at a roadside hotel in the Russian republic of Bashkortostan. The hotel was rented out in its entirety by migrant workers from Uzbekistan who worked at a nearby greenhouse complex. A coronavirus outbreak there ended up with eight people needing hospitalization. The hotel was placed under strict quarantine.

Botir Shermuhamedov, a Moscow lawyer specializing in the legal rights of labor migrants, said that he and colleagues have set up an assistance service for people diagnosed with the virus.

“Our call center operates in four languages. We give information, answer questions, help deliver groceries, call ambulances. And now we are setting up a migrant assistance fund,” he told Eurasianet.

The Uzbek Embassy in Moscow has created a program whereby any Uzbek labor migrant discovered to have the coronavirus will have 12,000 rubles ($175) paid onto their bank card.

Many have not been willing to wait around for air evacuations. The most desperate travel overland, but the border of Kazakhstan has been a difficult hurdle. On May 11, it was reported that more than 1,000 people had assembled at a tent city on the Russian-Kazakh border. Crisis talks between the Uzbek and Kazakh governments achieved something of a breakthrough and 11 busloads of people were allowed across on May 17.

The problem did not go away, however. More are coming. The Foreign Ministry said in a statement on June 4 that around 300 Uzbek nationals were stuck at the Mashtakovo crossing on the border of Kazakhstan and Russia. The ministry pleaded for others to refrain from joining them.

“We kindly ask fellow citizens located on the territory of Russia not to attempt to travel to the Mashtakovo checkpoint or other crossing points on the Russian-Kazakh border, and to remain instead in their current places of residence and to strictly observe all quarantine measures,” the ministry said, adding that it was trying to organize more evacuation flights. 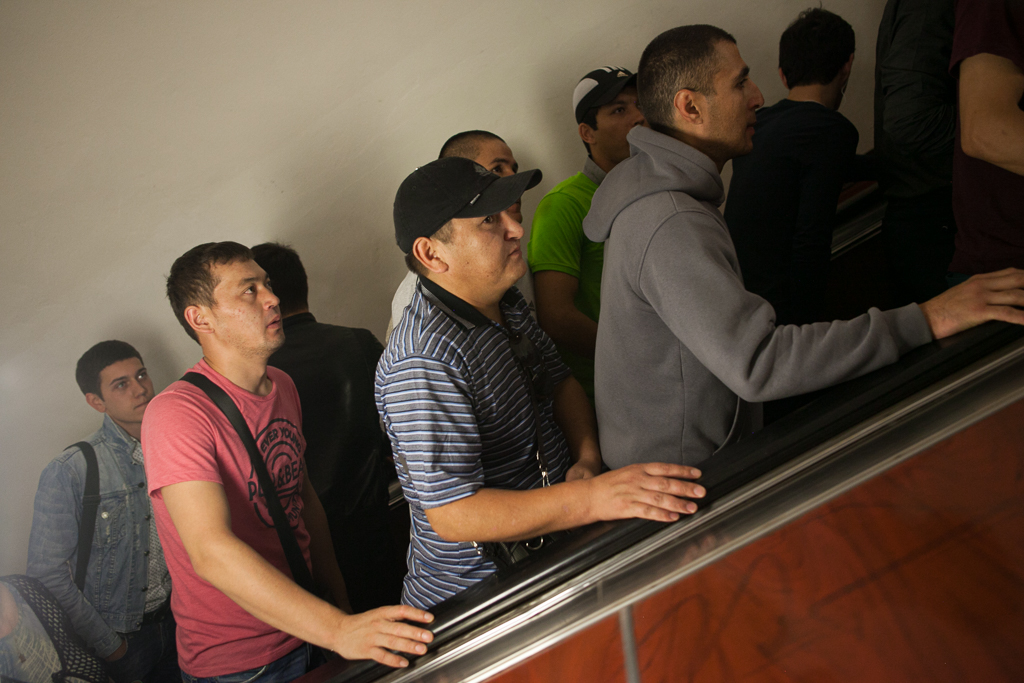 In Uzbekistan itself, not everybody is delighted about the return of so many compatriots from Russia. They look at the relative new infection figures – high in Russia, low in Uzbekistan – and worry about the implications. Grumbling has broken out on social media about migrant workers “spoiling the statistics.” In daily briefings, the Health Ministry points out that newly detected COVID-19 cases are often accounted for by arrivals from abroad.

“To be honest, I am opposed to the return of Uzbeks from Russia. I am afraid that because of them, the number of infected people will increase dramatically in Uzbekistan. My brother is in Vladivostok, too, but we asked him to wait out the crisis,” Javlon Yermatov, a resident of the Ferghana Region, told Eurasianet.

It is not just the fear of infection that spooks people. The anxiety is that a second wave may prompt a return to restrictive and economically damaging shutdowns that have by now been mostly lifted.

The authorities, meanwhile, fret about the social implications of this wave of unemployed people. On May 30, Yerkin Mukhitdinov, the deputy Employment and Labor Relations Minister, said nearly 500,000 labor migrants now without a regular income had returned to Uzbekistan since the outbreak of the global pandemic. They are straining the labor market.

This is the trap in which Fazliddin and Sogdiana’s parents are caught. They may wish to return home, but not many people, other than their children, are eager to see that happen.

For now, Fazliddin’s consolation is the audio messages he receives from his mother and father. When he hears their voices, it feels to him like they have already returned home. Sometimes, he rushes outside onto the street in the hope of finding them waiting. But there is never anybody there.