Uzbekistan: Is the Economy Going into a Tailspin? 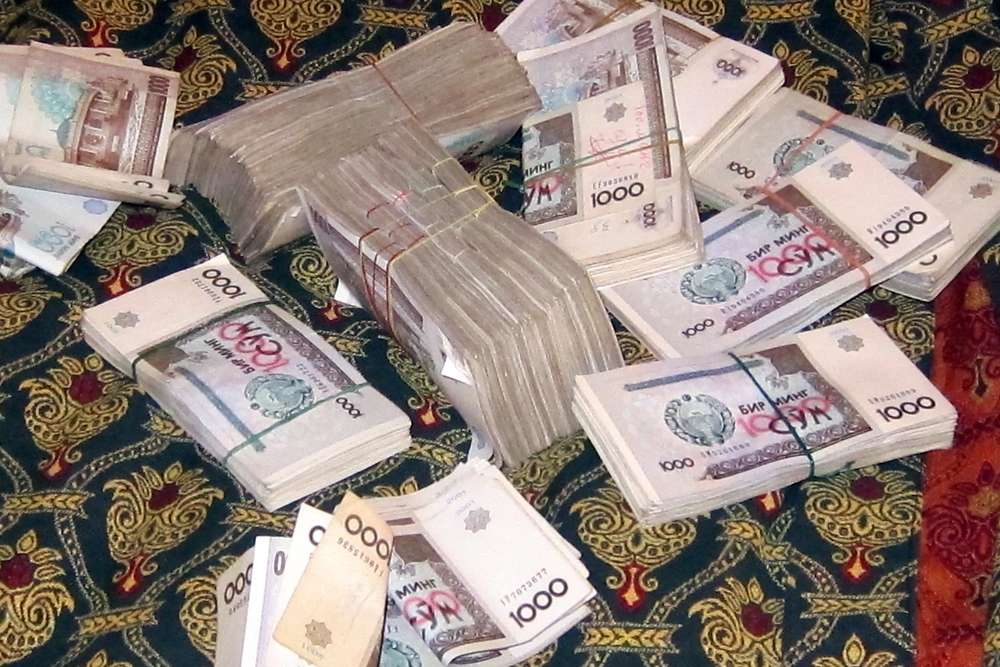 It will soon be more difficult to get a hold of Uzbek hard currency. (Photo: Joanna Lillis)

Uzbekistan has introduced sweeping new banking and import regulations that appear designed to keep hard currency from leaving the country. Observers say residents and entrepreneurs should expect a bumpy ride in the coming months, as the cumbersome new measures are expected to drive up prices for basic goods and encourage an expansion of the shadow economy.

At the beginning of February, new rules regulating foreign currency exchange basically made it impossible for Uzbeks to get their hands, legally, on hard currency. Under the new rules, residents can only trade Uzbek sums for virtual hard currency loaded onto plastic banking cards for use abroad or online, not cash. At the same time, authorities began arresting the currency traders who operate in a thriving black market, where the US dollar fetches approximately 40 percent more than banks offer in exchange for sums.

While the exchange regulations received widespread attention, on January 30 customs authorities also quietly introduced new import rules requiring mountains of paperwork.
According to the State Customs Committee, importers must now submit "preliminary" customs declarations for all imported goods 30 days in advance. Along with the preliminary declaration, importers are also required to procure certificates showing goods' compliance with Uzbekistan’s strict and oft-changing hygienic, conformity and veterinary standards. The new steps add more paperwork to an already burdensome process. And in Uzbekistan – routinely classified as one of the most corrupt countries on the planet; Transparency International ranks it tied for 170th out of 174 countries surveyed in its most recent Corruption Perceptions Index – paperwork often gives authorities a chance to find errors, perceived or real, and solicit bribes.

Officially, the new customs regulations stated aim is to "further fundamentally improve the business environment and provide greater freedom to entrepreneurship" and to "liberalize" foreign trade. But with the regulations announced so suddenly, after no public discussion, few are taking authorities at their word.

Instead, some regional media outlets have suggested authorities are trying to keep hard currency from leaving the country; others speculate that authorities are protecting the business interests of a well-connected individual or family (not unheard of in Uzbekistan). Either way, analysts say it is difficult to imagine Uzbekistan’s limited domestic manufacturing base offering substitutes of sufficient quantity and quality to offset the expected price fluctuations as goods disappear from store shelves.

Import restrictions in Uzbekistan are hardly news: In 2000, Tashkent banned individuals from importing goods for resale. In 2009, the maximum value of goods that could be imported duty-free for personal consumption was reduced to $10 per person. These rules turned travel abroad for the average Uzbek into a troublesome experience. Long lines are now routine at border crossings, as customs officers sift through bags to identify items subject to customs duties or seizure (or another chance to solicit a bribe). Because high import tariffs already make consumer goods in Uzbekistan expensive, many Uzbeks have long preferred to shop in neighboring countries such as Kazakhstan and Kyrgyzstan. This practice is growing increasingly difficult under the existing regulations.

Unsurprisingly, when it comes to facilitating cross-border trading, the World Bank recently ranked Uzbekistan as the worst performer out of 185 countries surveyed in its Doing Business report for 2013.

Coupled with the latest foreign currency restrictions, analysts believe the new import regulations aim to prevent Uzbekistan’s foreign exchange and gold reserves from dwindling. (By limiting imports, the idea is the authorities are limiting the outflow of precious foreign cash and gold. Most analysts consider current account statistics unreliable). Tashkent does not publish data on its reserves, or what share of its export earnings are channeled into replenishing reserves. But given the government's reluctance to borrow, the restrictions on the circulation of hard cash suggest Tashkent's is having trouble balancing the books.

"Coming on the back of the recent changes to currency regulations, one reason for the import restrictions is likely to be that the government is seeking to protect the country’s foreign-exchange reserves," Anna Walker, a Central Asia analyst at the London-based Control Risks consultancy, told EurasiaNet.org. "It also probably reflects a long-standing policy of encouraging import-substituting industrialization, though this policy has failed to foster a dynamic, domestic industrial sector that produces goods capable of competing with imports."

Walker doubts the Uzbek government can achieve its economic goals by administrative fiat alone. "Given the prevalence of imported goods in most sectors, it is highly unlikely that domestically produced goods will be able to substitute for imports. The government’s attempts to attract foreign investment in sectors other than natural resources have been largely unsuccessful, and the domestic manufacturing sector does not have the capacity to fill the gap left by the new import restrictions," Walker added.

The stifling import and currency regulations often force Uzbek entrepreneurs to operate in the shadows. Privately, many confess they can only survive by bribing tax and customs officials. One entrepreneur, a jeweler, who agreed to talk to EurasiaNet.org on condition of anonymity, said he thought any new import restrictions were done for one reason only: “To prevent the outflow of foreign currency from the country."

While there has not yet been a visible impact on the prices for essentials in the capital, Tashkent, the restrictions have started hurting supplies. One shopkeeper told EurasiaNet.org that he was having trouble sourcing chocolate and candy. While other items were still in stock, he explained, his local suppliers have stopped accepting and delivering orders.