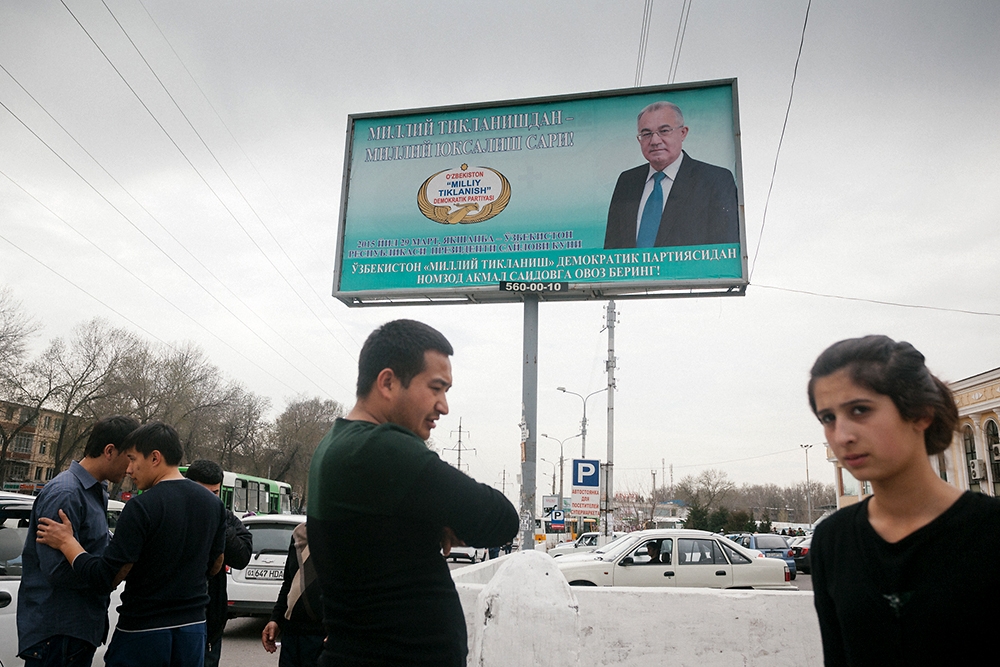 The mercury is rising in Uzbekistan now that spring has arrived, yet the political temperature remains cool in advance of a presidential election March 29. Uzbekistan may suffer from a variety of political, social and economic ills, but election fever has never gripped this Central Asian state.

Islam Karimov – Uzbekistan’s aging strongman, who has ruled the country since the Soviet era – is set to sail to victory in the upcoming vote, flouting constitutionally mandated term limit provisions along the way.

On March 26, the day before the campaign ends, signs of political activity were thin on the ground in Uzbekistan’s capital. Election billboards featuring the four presidential candidates hung over major thoroughfares, but no posters were visible on the bustling streets of downtown Tashkent frequented by shoppers and office workers.

Despite a lackluster campaign (during which the incumbent disappeared for three weeks, sparking speculation about his health), Karimov is certain to win a landslide against three stalking horses: Khatamzhon Ketmonov, Narimon Umarov, and Akmal Saidov. Rather than emphasize their own respective qualifications, all three challengers have spent much of their campaigns effectively promoting the incumbent.

Karimov “is being portrayed by the other presidential hopefuls as the best candidate,” noted observers from the Office for Democratic Institutions and Human Rights (ODIHR), the election monitoring arm of the Organization for Security and Cooperation in Europe, in findings released ahead of the election.

With all the campaigns drumming a pro-Karimov message into voters, many say they are happy to cast their ballots for the long-serving president, who this week celebrated a quarter of a century in power in Uzbekistan. He became president in 1990, when Uzbekistan was still a constituent republic of the Soviet Union.

“I’m voting for Islam Karimov,” said a voter in his late 50s, who declined to be identified. “He’s a great guy! We have peace and stability in Uzbekistan.”

This voter was partly echoing Karimov’s campaign slogan of “peace, prosperity, and the democratic revival of the country,” proclaimed on a billboard over Tashkent’s Shota Rustaveli Avenue. The billboard depicted the incumbent smiling down on his electorate.

“He’s the only one who’s smiling on the posters – perhaps he told the other candidates not to smile!” joked a businessman, speaking anonymously.

The ODIHR – which has never deemed an election in Uzbekistan free and fair – says there is “little competition” in this vote. It is fielding only a limited election observation mission, owing to “issues over conditions for the emergence of a genuine opposition and the conditions for campaigning, among others,” spokesman Thomas Rymer told EurasiaNet.org.

Uzbekistani human rights campaigners are outraged over the lack of genuine choice. “This is the stamp of a modern-day dictator,” Nadejda Atayeva, a Paris-based activist, told EurasiaNet.org. “There is not a single representative of the opposition.”

Activists are also enraged that Karimov is defying the constitution, which stipulates that presidents can serve two five-year terms. “Karimov is standing for the fourth time,” says Atayeva. “He is the guarantor of the constitution – but he doesn’t respect [it], so he doesn’t have any legitimacy.”

Officials are arguing – not for the first time – that this election counts as Karimov’s first term, because the constitution has been altered since he was last elected. By this logic, the 77-year-old president could rule into his late eighties, or until 2025.

“Despite any legal acrobatics the government may use to justify another presidential term for Islam Karimov, there can be absolutely no question that his standing for a fourth term violates not only the letter, but also the spirit of Uzbekistan’s constitution,” Steve Swerdlow, Central Asia researcher at Human Rights Watch, told EurasiaNet.org.

Two unidentified “citizen groups” in Uzbekistan have challenged the eligibility of Karimov’s candidacy, the ODIHR says, but received no reply from official bodies.

To highlight what they see as violations of political liberties, campaigners in exile have organized a “virtual vote.” The exercise hopes “to show that all rights are being violated in Uzbekistan’s election, and Islam Karimov is violating the constitution,” Mutabar Tadjibayeva, head of the Paris-based Fiery Hearts Club human rights association, told EurasiaNet.org.

US-based opposition activist Bahodir Choriev is leading the online poll, but voting has been hampered by a spate of hacker attacks: this week, visitors to the site were greeted by an onslaught of pornographic images.

The election comes at a sensitive time for Tashkent, following a family feud that resulted in the downfall of the president’s elder daughter, Gulnara Karimova, now under house arrest and facing corruption charges at home. She is also the target of international graft probes.

Against this backdrop, “the regime must have concluded that, at this stage, re-electing Karimov is the safest way to ensure stability in the short term,” suggested Luca Anceschi, a Central Asian Studies lecturer at the UK’s University of Glasgow.

Even if Karimov wanted to relinquish the reins of power, it would be difficult, says Alexander Melikishvili, a Washington-based analyst at the IHS research company. Karimov has become “a hostage of the political system which he created,” he told EurasiaNet.org, partly because the top-down system is dependent on him and partly because he fears for his own security and that of his family if he steps down.

Leaving office may be fraught with security risks for Karimov – but observers say that an ageing president clinging to power is fraught with political risks for Uzbekistan. Ultimately, Karimov’s eventual departure from the political scene could be accompanied by a destabilizing power struggle.

Karimov should step down before the system is put to the test, said US-based political exile Sanjar Umarov (no relation to the presidential candidate). Karimov needs to ensure “a peaceful transition of power.” “Time is passing,” he told EurasiaNet.org. “Sooner or later the sand in the hourglass runs out.”