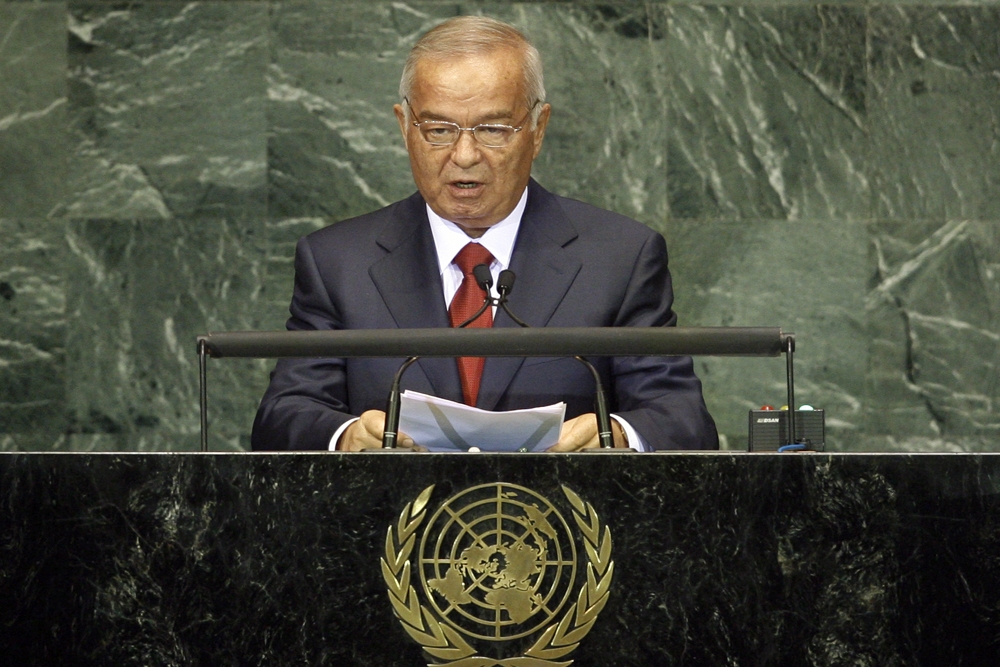 The outward signs in Tashkent, Uzbekistan’s capital, suggest nothing out of the ordinary is going on. But whether or not Uzbek strongman Islam Karimov has experienced a serious heart attack, as some reports suggest, the episode highlights the fact that no clear-cut succession plan is in place.

Sources in Tashkent report no sign of the type of beefed-up security in central Tashkent that would be expected if authorities had cause to be nervous about political stability. At the same time, Karimov has not made a public appearance, either in person or on television, since the controversy began. But, the Tashkent sources add, it's not particularly unusual for Karimov to be out of sight for prolonged stretches of time.

On March 24, the PMU said it had confirmation of the news from a second source, an unnamed journalist at a state media outlet, “performing his activities directly under the oversight of the National Security Service and the press service of the president of Uzbekistan.”

That report quoted the journalist as saying Karimov is “seriously ill.” Karimov was last seen in public on March 19 at celebrations of the Navruz spring equinox holiday, where state television showed him dancing.

The journalist said state media had been ordered to broadcast archive footage of Karimov looking hale and hearty – but sources in Tashkent say that there has been no unusual news footage broadcast on television in recent days. Uzbekistan’s heavily controlled state media outlets have not reported the heart-attack allegation.

No other sources apart from the PMU have independently confirmed the report. A source in the presidential administration denied it, telling Russian news agency RIA Novosti on March 22: “The president of Uzbekistan is in excellent form as always and does not have any signs of any indisposition.”

One independent website, Uznews.net, cited a source “close to the power structures of Uzbekistan” denying the news and saying Karimov – who has been in power for over two decades – was “alive and well.

The main source of the reports, Solih, certainly may have an axe to grind with Karimov, his sworn enemy: Solih stood against Karimov in the 1991 presidential election and lost, and was arrested in Uzbekistan in 1992 on treason charges but released under international pressure. He fled Uzbekistan and has political asylum in Norway. Solih was later accused of masterminding bombings in Tashkent in 1999, and sentenced at a trial in absentia to 15 years in prison.

Speculation about Karimov’s health has periodically circulated for at least a decade. Such rumors can be the product of behind-the-scenes political intrigue, and can be intended to undermine his authority. But given the secretive nature of the Uzbek leadership, there is no way for outside media outlets to independently verify such reports.

In this particular case, the heart-attack claims bring into sharp focus a looming, potential power vacuum in Tashkent. Karimov guards his power jealously and shows no public sign of grooming a successor or planning a clear-cut power transition. Observers believe his death or incapacitation in office could easily precipitate a bitter, politically destabilizing succession struggle.

The reports also are prompting some observers to revisit the question of whether the president’s flamboyant 40-year-old eldest daughter, Gulnara Karimova, has a political future. A few years ago, it appeared as though Karimova was politically finished.

But many observers believe that, prior to the heart-attack reports, Karimova had once again set her sights on succeeding her father. In an interview given last year and recently published on YouTube, she did not rule out a run for the presidency.

If Karimova does desire the top job, her candidacy faces many challenges. She is not popular among the public, but more importantly she has reportedly made powerful enemies among members of Uzbekistan’s elite. Leaked US diplomatic cables described her as “a greedy, power-hungry individual who uses her father to crush business people or anyone else who stands in her way.” She was also dubbed the “single most hated person” in Uzbekistan.

Karimova’s public image has taken another knock of late as her name has been linked to corruption scandals involving her associates that are the subject of two European investigations: a money-laundering investigation in Switzerland and a probe into allegations of dubious payments by Nordic telecoms giant TeliaSonera to enter Uzbekistan’s cellphone market.

With internal opposition ruthlessly suppressed in Uzbekistan, any candidate to succeed Karimov is almost certain to emerge from within the corridors of power. Some names occasionally tipped as future leaders include Shavkat Mirziyoyev, who has been prime minister for a decade; Rustam Inoyatov, the head of Uzbekistan’s feared National Security Service; and Rustam Azimov, the first deputy prime minister.

When the day eventually comes, it would not be surprising if Karimov’s successor emerges from the political shadows, as happened in 2006 in Turkmenistan, which, along with Uzbekistan, is routinely ranked by watchdog groups as among the most repressive states on earth. In the Ashgabat transition, few outside observers had heard of Gurbanguly Berdymukhamedov, the man who took over from the mercurial despot Saparmurat Niyazov.