The fate of funds in foreign accounts remain in the balance, however. 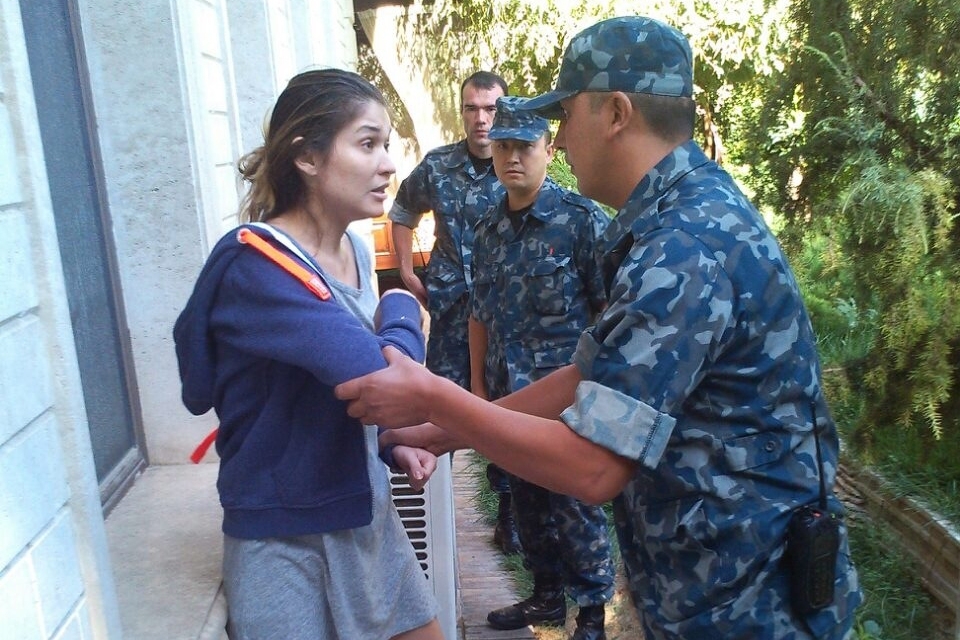 Photographs released by Karimova’s spokesman in 2014 show what appeared to be a tense standoff with the authorities around the time she disappeared from public view.

The imprisoned daughter of Uzbekistan’s late president has reportedly published a statement tentatively admitting responsibility for years of larceny and said that she has paid $1.2 billion into the state coffers.

Gulnara Karimova’s statement was posted on an Instagram account and then reposted, through the same social media website, by her daughter, Iman, who has previously spoken on her behalf to the press. As of June 24, however, the reposting appeared to have been reversed, while the original statement still partially stands on an account billed as Gulnara Karimova Team.

The three-page declaration, which is written as a confessional first-person letter from Karimova, states that the entirety of the $1.2 billion now reclaimed by the Uzbek government has come from “personal assets located in Uzbekistan.”

Officials have not issued any comments to confirm or deny the details of the statement.

Karimova was arrested in Tashkent in August 2015 on charges including corruption and tax evasion. Her detention occurred before the death of her longtime-ruling father, Islam Karimov, in September the next year.

Following a secretive trial, Tashkent regional court in December 2017 sentenced Karimova to 10 years of “limited freedom,” which in effect meant house arrest. She later pledged to assist in recovering funds said to have been improperly acquired, prompting the court to commute the sentence to five years. Earlier this year, however, the court ordered Karimova to be moved to prison after finding that she had violated the terms of her house arrest.

Grégoire Mangeat, a Swiss-based lawyer representing Karimova’s interests, wrote on Twitter on June 17 that he had visited his client in Zangiota prison, which lies just outside the capital, Tashkent, and had found her to be in bad shape.

Karimova’s children told the Guardian in March, after she was moved to prison, that “she has serious health problems and requires two operations, but has not been given access to doctors.”

But news website UzReport on June 24 cited a government human rights ombudsman as saying that their office had visited Karimova in prison and that her “overall health is generally satisfactory.” The ombudsman said Karimova has been examined by specialists in cardiology, neurology, gastroenterology, endocrinology and gynecology.

Even if the claim that this large tranche of assets has been returned to the Uzbek state is confirmed, the fate of monies spirited abroad still remains unsettled. Tashkent has previously been said to be in search of around $1.5 billion salted away in at least 12 countries.

The letter said to be from Karimova expresses a desire to provide cooperation in retrieving some of those funds, but points to mitigating factors.

“Funds in frozen accounts in Switzerland are not a matter that affect only me and that depend only on me. Many [people] in other countries have laid claim to them,” the letter states.

Karimova subsequently states that her lawyers have already withdrawn her claims to $131 million and that they are planning to do the same for a further $555 million. It is not wholly clear from the letter where these funds are located, although the context appears to suggest this is an allusion to the money in foreign accounts.

The U.S. Justice Department has between 2015 and 2016 filed civil complaints seeking the forfeiture of more than $850 million allegedly obtained by Karimova and her accomplices as bribes from telecommunications companies wishing to operate in Uzbekistan. Of that total, around $550 million is said by U.S. prosecutors to be held in Swiss accounts, while another $300 million was allegedly spread across Belgium, Luxembourg and Ireland. The companies charged with paying the bribes were Moscow-based MTS, Amsterdam-registered VimpelCom Limited (now rebranded as VEON) and Sweden’s Telia Company AB.

Karimova was not actually formally in charge of the country’s telecommunications industry when these kickbacks were paid, however, so her authority to sway the licensing process appears to have stemmed entirely from her status as a presidential daughter. In the years that MTS, VimpelCom and Telia were securing their Uzbek licenses, it was current prime minister Abdulla Aripov who oversaw the sector. Aripov had fulfilled that role stably from 2002 through to 2016.

Further adding to Karimova’s legal troubles, the Southern District of New York on March 7 filed an indictment charging her on one count on money laundering.

“Karimova stands accused of exploiting her official position to solicit and accept more than $865 million in bribes from three publicly traded telecom companies, and then laundering those bribes through the U.S. financial system,” said Brian Benczkowski, assistant attorney of the Justice Department’s Criminal Division.