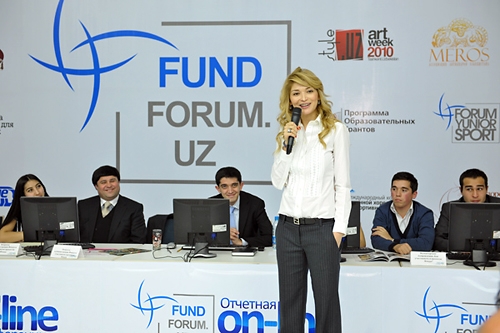 Partnerships between Karimova’s Fund Forum and Western organizations, such as The Louvre in Paris, are drawing criticism. (Photo: Fund Forum)

What do the Louvre Museum in Paris, the British Council, the Japanese International Cooperation Agency and Susan G. Komen for the Cure, a foundation that is a global leader in the fight against breast cancer, have in common? If you answered Gulnara Karimova, you were right.

The eldest daughter of Uzbekistan’s strongman, Islam Karimov, has acted aggressively in the past year or so to cast herself as an influential patron of the arts and all-around do-gooder. The chief vehicle for her philanthropic makeover is the Fund Forum, an entity that has been around since 2004 and which bills itself as dedicated to “reviving the spiritual legacy and the national traditions of the Uzbek nation [and] boosting the creative potential of prominent public figures and culture professionals.” Karimova serves as chair of the organization, which some critics complain has started exerting a disconcerting amount of influence over Uzbekistan’s cultural life.

The Fund Forum and Karimova have generated lots of international attention. On April 19, it announced a partnership with the Louvre museum, in which the two entities will cooperate “in various areas, including exchange of specialists, organization of art shows, conferences and workshops in both countries, interaction in archaeology, restoration projects, oriental antiques and Islamic art." In addition, the Komen foundation has come under fire in recent days for associating with Karimova to sponsor a May 1 race in Tashkent dedicated to raising funds for breast cancer research.

While the Komen Foundation maintains it partnered with an umbrella organization, rather than Fund Forum directly, it is clear that it doesn’t take long for news of joint projects to attract negative attention. Critics assert that working with anything connected to Karimova serves to legitimize her father’s administration, which is routinely ranked by rights groups and democratization watchdogs as among the world’s most brutal and repressive regimes.

“Everyone knows that the Fund Forum is Gulnara Karimova's PR instrument, and it is a shame that the Louvre is condoning widespread human rights violations [in Uzbekistan],” Shahida Tulaganova, a former BBC reporter from Uzbekistan who now lives in London, told Eurasianet. ”Their attitude will be detrimental for the Louvre’s own image.”

The Louvre’s press office in Paris did not respond to EurasiaNet.org’s repeated requests for comment. It is noteworthy that the museum’s website does not list a partnership with the Fund Forum.

The fund’s international connections aren’t the only thing that is controversial about its activities. Its influence over Uzbekistan’s arts and culture scene is fast becoming a matter of concern – albeit mostly among observers who live outside of Uzbekistan. Some suggest that the Fund Forum is creating a new artistic reality in the country -- one that is subject to the whim of one person’s tastes, Gulnara Karimova’s. Just as Communist rule gave rise to the genre of Socialist Realism, a new aesthetic, which could be dubbed Karimov realism, is taking shape in present-day Uzbekistan. It’s a style that appeals mainly to the fortunate few who comprise Uzbekistan’s political elite.

"Fund Forum dominates the cultural sphere in Uzbekistan; it has taken over most cultural entities, including associations of artists and craftsmen. This domination often stifles independent art," Tulaganova, the former BBC reporter, said. "Fund Forum's lavish cultural activities, which are probably paid for with taxpayers’ money, benefit well-connected urban elites who have the money and time to appreciate art and culture. For the vast majority of Uzbek citizens, its cultural activities do not make sense."

The Fund’s activities underscore the divide between a “dwindling cosmopolitan cultural elite” and the “traditionalist elites whose narrow views of Uzbek culture are taking over,” said Laura Adams, a scholar at Harvard University.

“The organization reflects the taste and priorities of just one person, and that wouldn't be a problem if it were a truly private foundation,” Adams told EurasiaNet.org. “But since it is in many ways serving as a replacement for funding that used to come from the Ministry of Culture, it could be considered a quasi-public institution and should be more transparent and accountable than it is.”

The fund, which is formally titled Forum of Culture and Arts of Uzbekistan Foundation, does have its defenders. One, a Tashkent-based journalist, who spoke on condition of anonymity, insisted that the foundation was exerting a positive influence. "The Fund allows talented artists to prosper,” said the journalist, who covers cultural affairs for a government newspaper. “It has also offered financial and technical support to many poor local craftsmen who are now able to sell their work abroad."

Karimova’s turn as a philanthropist may, in itself, be a PR move. In recent years, she has embraced a variety of personas, including academic, diplomat, fashionista, football impresario and music diva. Some of these endeavors have caused her major embarrassment abroad, in particular the protests last September that forced organizers to cancel her show during New York Fashion Week. Her activities have also earned her, according to a diplomatic cable released by WikiLeaks, the title of “the most hated person” in Uzbekistan.

If Karimova is indeed attempting to soften her image at home through her work with the Fund Forum, it doesn’t appear to be working. A random sampling of opinion in Uzbekistan suggests she remains at home an object of widespread scorn. "With her jet-setting and glamorous lifestyle, skimpy dresses, and extravagant jewelry, Gulnara often represents values that contradict modesty and virtue, values Uzbek women are expected to represent," said a former high school teacher in Ferghana City.