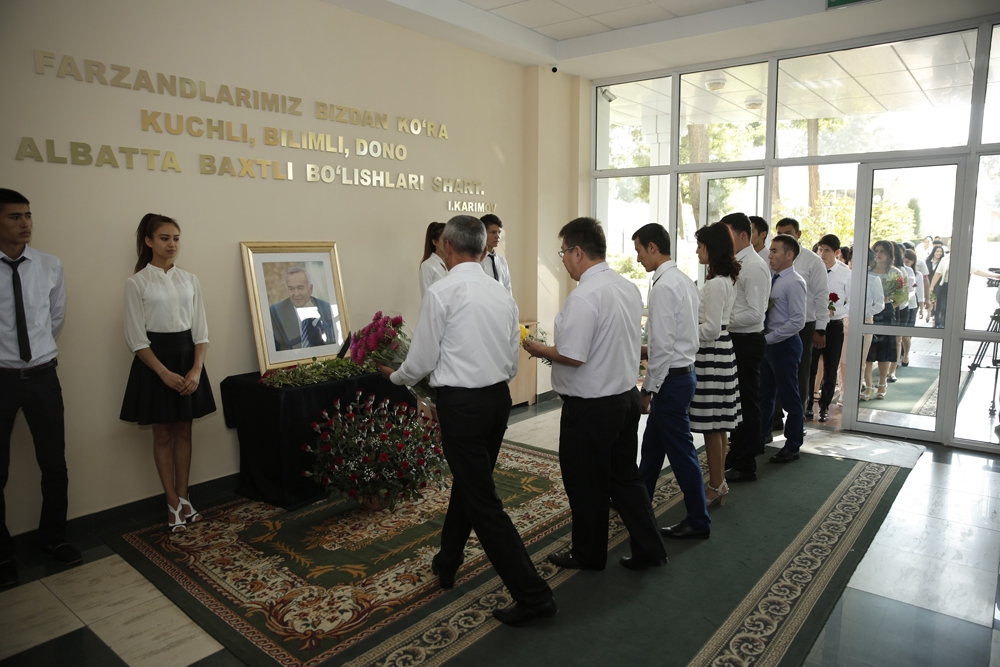 Students and faculty at the Tashkent Institute of Arts and Design lay flowers by a photo of Uzbekistan’s late President Islam Karimov on September 4. (Photo: EurasiaNet)

Uzbekistan’s long-serving leader may be dead, but the government is intent on having his memory live on.

As soon as the announcement of Islam Karimov’s passing was confirmed on September 2, the state propaganda machine kicked into gear hailing the achievements of the late president.

Notably, Uzbek media is hailing Karimov for largely eschewing the vain excesses of Turkmenistan and Kazakhstan, whose own presidents are subjects of elaborate cults of personality. In contrast with those countries, Uzbekistan refrained from the ubiquitous proliferation of portraits of the president and no statues were erected in Karimov’s honor in his lifetime.

As the new leadership seeks to bolster its legitimacy, however, it is looking to consecrate Karimov’s standing and favor their own fortunes by association.

The wave of myth-making began with the president of neighboring Turkmenistan, Gurbanguly Berdymukhamedov. During his eulogy at Karimov’s funeral in Samarkand, Berdymukhamedov announced that squares in Turkmenistan would be renamed in the Uzbek leader’s honor. The Turkmen president’s speech was aired on Uzbek state television and repeated regularly thereafter.

Berdymukhamedov’s words inspired officials in Russia. On the same day, the chairman of the Culture and Mass Communications Commission of the Moscow city Duma, Yevgeny Gerasimov, told REN TV that a statue of Karimov could be installed next to the Uzbek embassy in the city.

“He was a leader that united peoples in Soviet times, as well as in the post-Soviet space. He was a person that enjoyed great respect among many people. He did everything to support piece and mutual understanding,” Gerasimov told the broadcaster.

Inside Uzbekistan, feats of reverence toward Karimov are becoming de rigueur.

A 75-year-old pensioner in the Namangan region, Husan Hodjibayev, set off from his home two days after Karimov’s funeral to embark on a 520-kilometer bicycle trip to the president’s final resting place.

“He spent so many sleepless nights; he worked so many days to build such a flourishing nation. None of this came easy to him. So I too decided to torment myself for a few days on the bicycle for the sake of my friend, so that I could visit his grave,” Hodjibayev told RFE/RL’s Uzbek service.

The strongest evidence of the incipient personality cult came with the first day of school and university after Karimov’s funeral. The semester opened with classes devoted to the late president’s memory. Teachers and local officials gave talks about the life and achievements of the dead president and at the end of the class, students were shown a hagiographical video account of Karimov’s career entitled “The Future Is for Us.”

On the day of the funeral itself, thousands of people in the capital, Tashkent, lined the streets, as a hearse carrying the president’s coffin was driven toward the airport for a flight to Samarkand. Many were visibly distraught at the sight, openly weeping. Government employees have told EurasiaNet.org, however, that officials undertook a concerted effort to press-gang as many people as possible into participating in the human corridor for the funeral cortege.

The official mourning period came to a close on September 5. On that day, in accordance with local custom, free dishes of plov were handed out in squares across Uzbekistan. Gatherings were attended by local and religions leaders, who opened proceedings by reciting prayers in memory of Karimov.

Political analyst and economist Anvar Nazirov argued that such adulation is not unusual for the region and was to be expected.

In Karimov’s lifetime, much of the personality-based devotion was more low-key than elsewhere in the region. Karimov was popularly known as “ota,” an affectionate Uzbek word for father. In the Fergana valley, he was referred to as “podsho,” meaning padishah, a term for sultans dating back to Ottoman times. Whatever disrespectful names people had for Karimov, they kept to themselves.

The budding Karimov cult rests on the perception that while many have been compelled by poverty and unemployment to seek their fortunes abroad, he stopped Uzbekistan from sliding into economic and social chaos. One key Karimov legacy recognized by admirers and critics alike has been the preservation of secular, albeit conservative, values. As groups like Human Rights Watch have exhaustively documented, however, that achievement came at a great cost.

“In 1998, in the name of preventing extremism, the Uzbek government adopted one of the world’s most restrictive laws on religion, outlawing most forms of public or independent worship, regulating religious clothing, and placing mosques under de facto control of the state,” HRW noted in a commentary piece after Karimov’s death. “By the end of 2003, according to Memorial, the Moscow-based human rights group, Karimov had already imprisoned nearly 6,000 people on political or religious grounds, a number that continued to grow, with hundreds of new arrests each year.”

For Karimov’s supporters inside Uzbekistan, that may have been a price worth paying to keep the country from falling prey to religious radicalism in the turbulent 1990s.

“Peace and stability — that was his main achievement. Despite everything, Uzbekistan remains a fairly open country to the world,” journalist Marufa Tohtahadjayeva told EurasiaNet.org.

Despite all these displays of adulation, Russia-based Central Asia specialist Sergei Abashin said it was too early to speak about a personality cult in the making, such as what has developed in Azerbaijan surrounding the late president, Heydar Aliyev.

“Within a year or two, it will become clear, but of course the authorities at the moment are trying to demonstrate continuity and drawing on the air of legitimacy that Karimov enjoyed in society,” Abashin said.