Police say they have embarked on a nationwide sweep for Hizb ut-Tahrir members. 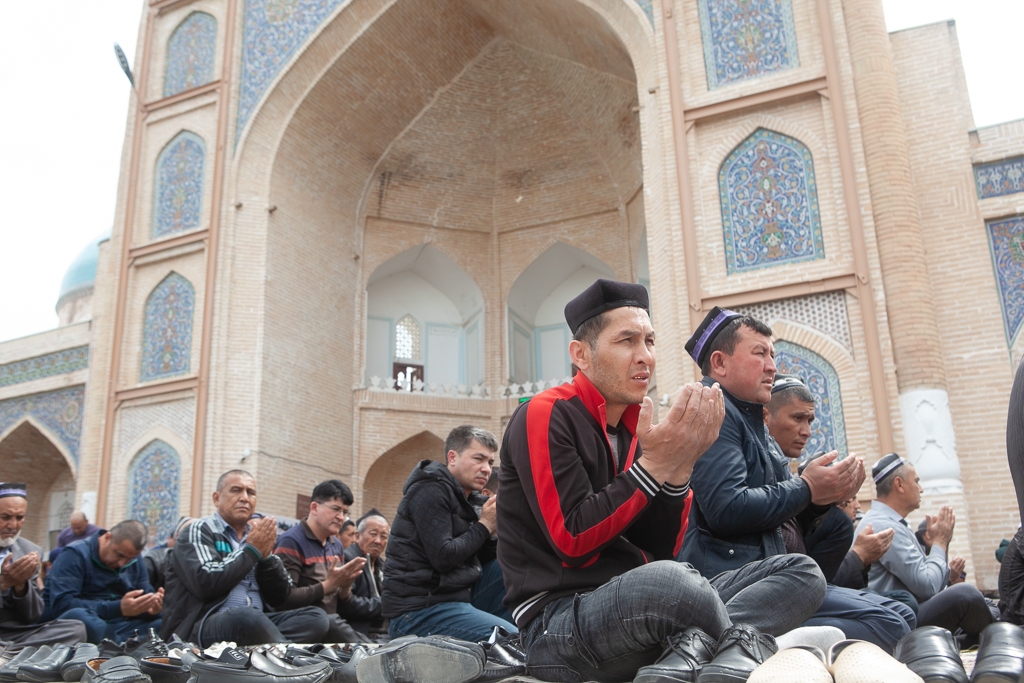 Friday prayers at a mosque in Kokand (David Trilling)

Law enforcement authorities in Uzbekistan’s Ferghana Valley have detained a group of people they say belong to Hizb ut-Tahrir, an Islamic group that the government has historically equated to violent militant groups like al-Qaeda.

The Interior Ministry said in a statement on May 28 that other supporters of the group are being sought in the Ferghana Valley cities of Andijan and Namangan, as well as in Tashkent and the Surkhandarya region.

All the detainees had previously served prison sentences for their links to Hizb ut-Tahrir and continued to propagate the group’s ideology even after being released, the ministry said in its statement.

Literature deemed extremist by the authorities was found at the homes of the detainees, police said.

The Uzbek government’s hard-line campaign against Hizb ut-Tahrir, which is proscribed in most Islamic countries but is on the whole warily tolerated in the West, began in the 1990s. Arrested members have often been severely tortured and sentenced to lengthy periods in prison, according to rights activists.

Although religion was heavily suppressed in Soviet times, Islamic beliefs enjoyed something of a revival from around the early 1980s. The Ferghana Valley in the Uzbek SSR proved a particularly fertile area for underground movements set up by Muslim clerics exposed to Islamic teachings overseas.

The trickle became a torrent for a brief period right after independence. Once the authorities found their feet and the political turbulence caused by the trauma of unanticipated independence had subsided, however, the crackdown waged by President Islam Karimov was resolute. Hizb ut-Tahrir, with its explicitly political brand of Islamic teaching, has always inspired special hatred.

The sweep for Hizb ut-Tahrir activists, or people perceived as sympathetic to the group, intensified in 1999, in the wake of terrorist attacks in the capital, Tashkent. One of those caught up in that wave of arrests included Hafizullo Nasyrov, who has been described as being the leader of the Uzbek wing of the organization. He was later sentenced to 20 years in prison.

In 2018, however, Nasyrov surfaced in a video message appearing to forswear his links to Hizb ut-Tahrir, a decision he reportedly said he had taken “after much deliberation.”

The continued hounding of Hizb ut-Tahrir signals that the Uzbek government is laying down a marker for where it sees the outer boundary for the pursuit of Islamic beliefs.

In September 2017, President Shavkat Mirziyoyev, who was elected to office in a one-horse race the year before, ordered that 16,000 names be removed from a government blacklist of 17,000 suspected extremists. But as Washington-based advocacy group Freedom House has written, Uzbek authorities in 2018 “added new restrictions for religious communities seeking legal status.”

What is more, Hizb ut-Tahrir members are still liable to be singled out for torture, according to rights groups and independent journalists.

The rules still appear to be in flux, however.

RFE/RL’s Uzbek service, Radio Ozodlik, in January reported that the government’s Committee for Religious Affairs had updated its list of proscribed religious content. The 40-page document, which has not yet been made public, includes sermons, books, websites, pages on social networks, as well as details of banned group members and self-styled ulemas deemed off-limits.

The banned groups include Hizb ut-Tahrir; the Nurjular movement, founded by Turkish theologian Said Nursi; Akromiya, a nebulous entity that Uzbek authorities have claimed lay behind the unrest in Andijan in 2005; the Deobandi-linked missionary group Tablighi Jamaat; and a Sufi movement called Nursafardiyya. Outright militant groups, known mostly for being active in Middle Eastern theaters of conflict, such as Jama'at al-Tawhid wal-Jihad and Jabhat al-Nusra (Al-Nusra Front), are on the list too.

Even as Uzbekistan’s progress toward establishing full-fledged religious freedoms proceeds only in selective fits and starts, it has received some form of endorsement from the U.S. government.

In April, the United States Commission on International Religious Freedom stated in its newest assessment on Uzbekistan that the government had taken “notable steps to address … long-standing and significant religious freedom concerns.” The commission stressed there were still areas of worry, though.

“Some incidents throughout 2019 reinforced concerns that the government continued to restrict Muslim religious practice not in line with the state-prescribed interpretation of Islam,” the commission’s report found. “The government opposes Muslims growing beards or wearing hijabs as expressions of their religious beliefs, and both local government and law enforcement officials singled out and violated the rights of visibly religious Muslims.”

The same report noted that the government had in the second half of 2019 reassigned the deputy chairman of the Committee on Religious Affairs, Nuriyman Abulhasan, to the Interior Ministry’s Department for Combating Terrorism and Extremism, and then appointed Abdujafur Ahmedov, an officer from the State Security Service, a reformed successor agency the KGB, to lead the religious committee.

The implications of such personnel reshuffles are clear – that the government continues to view Islam as an inherent potential risk to national security.