Uzbekistan, Kyrgyzstan shuttle trade booms, but for how long?

When Uzbekistan reopened its border with Kyrgyzstan, trade boomed. So much so that Tashkent has reined it in. 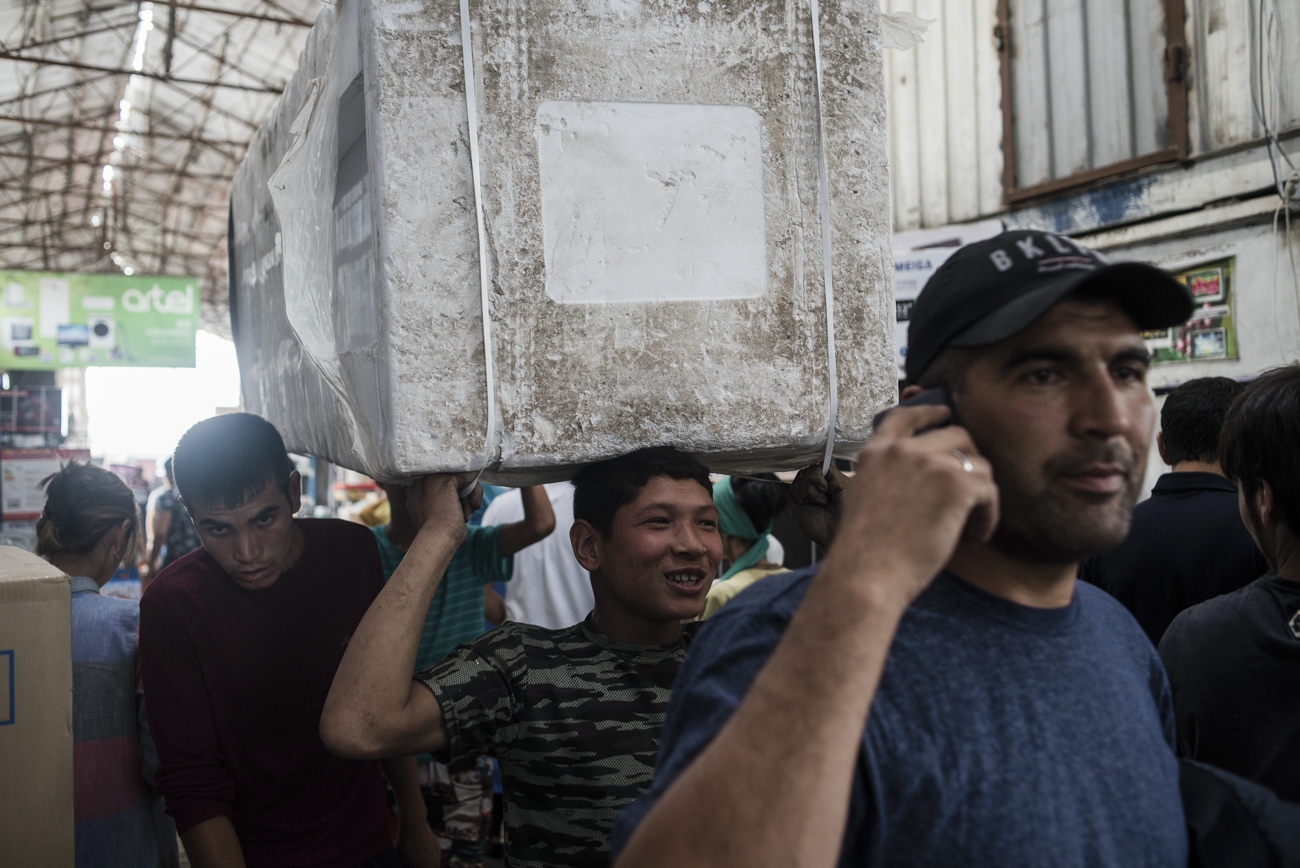 Dayworkers carry refrigerators for Uzbek citizens in the market in Kara-Suu. (All photos by Danil Usmanov) 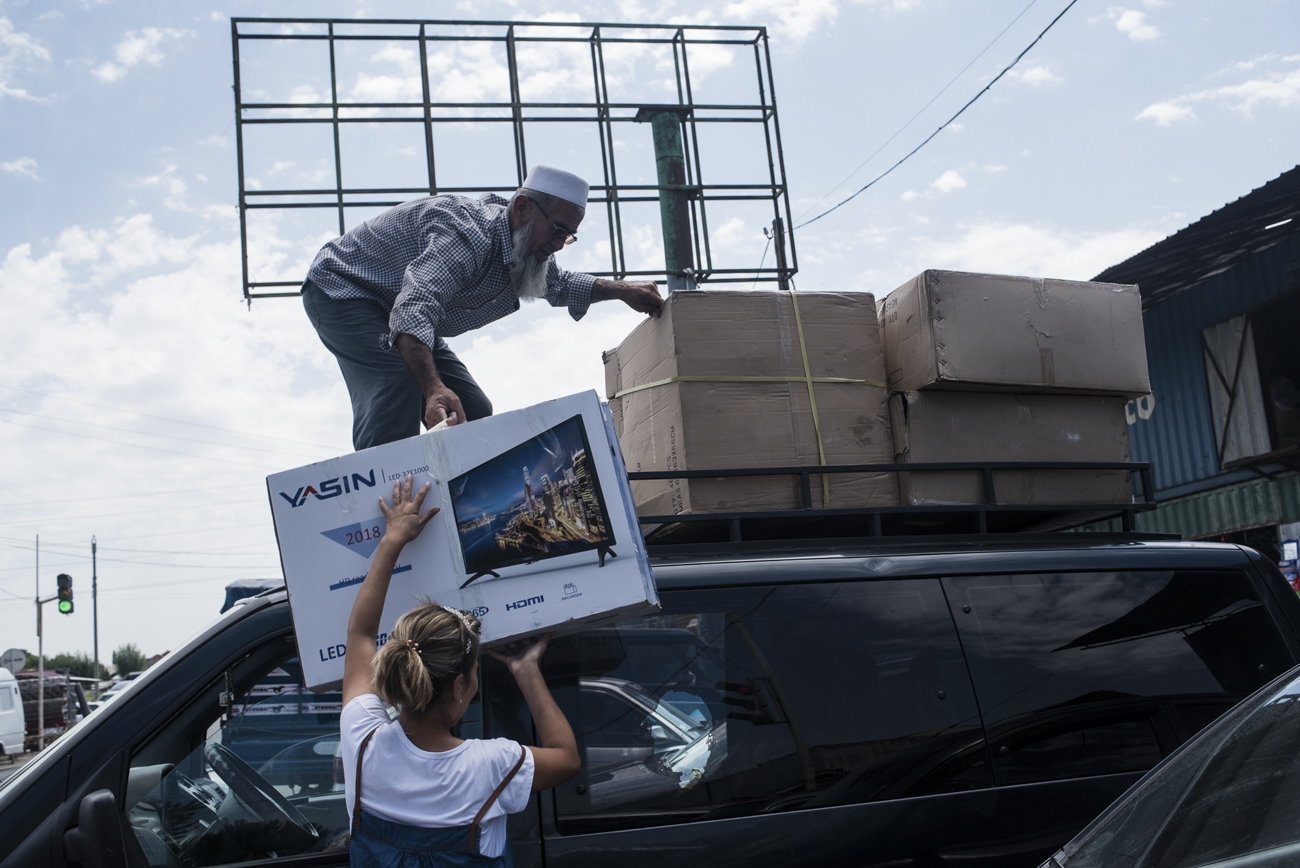 A taxi driver loads household appliances onto the roof of his car in Kara-Suu. 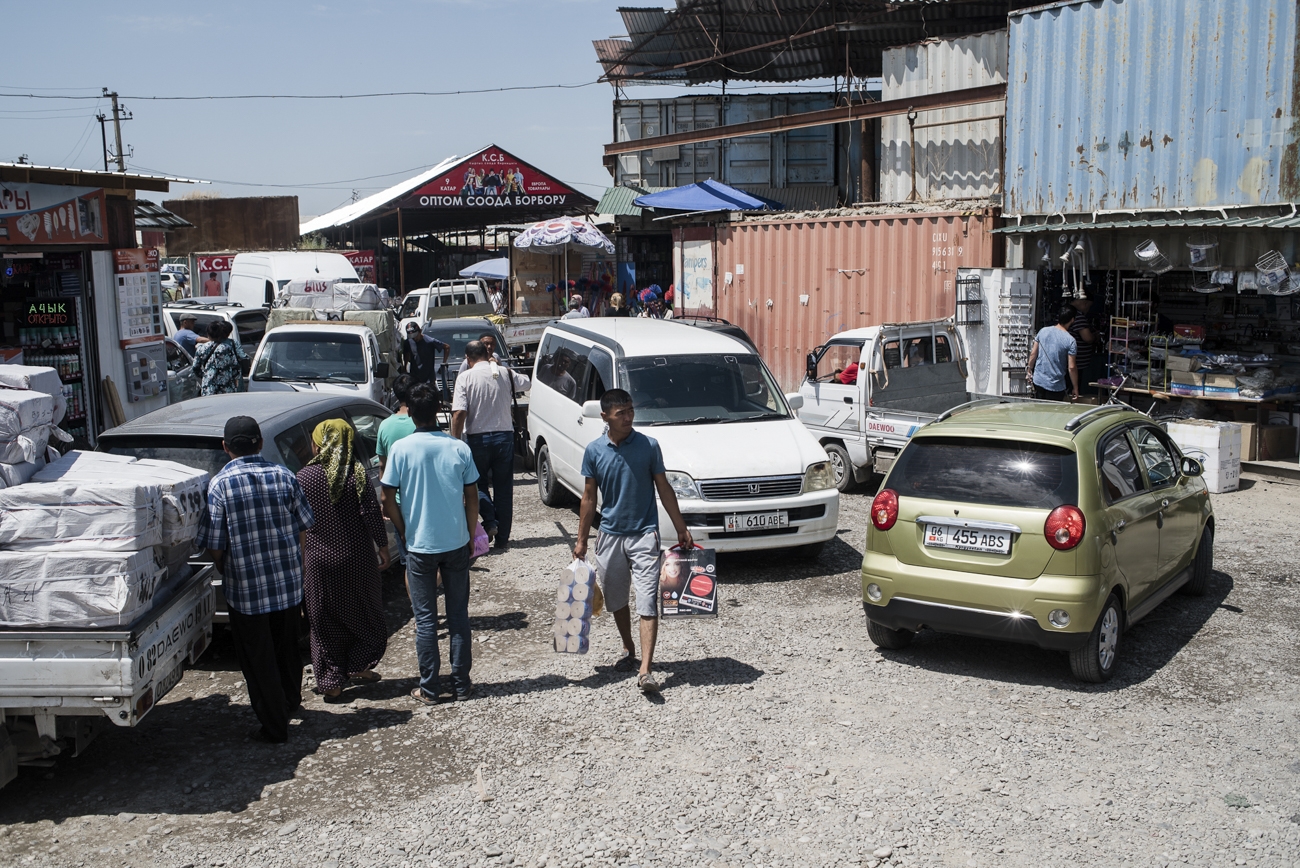 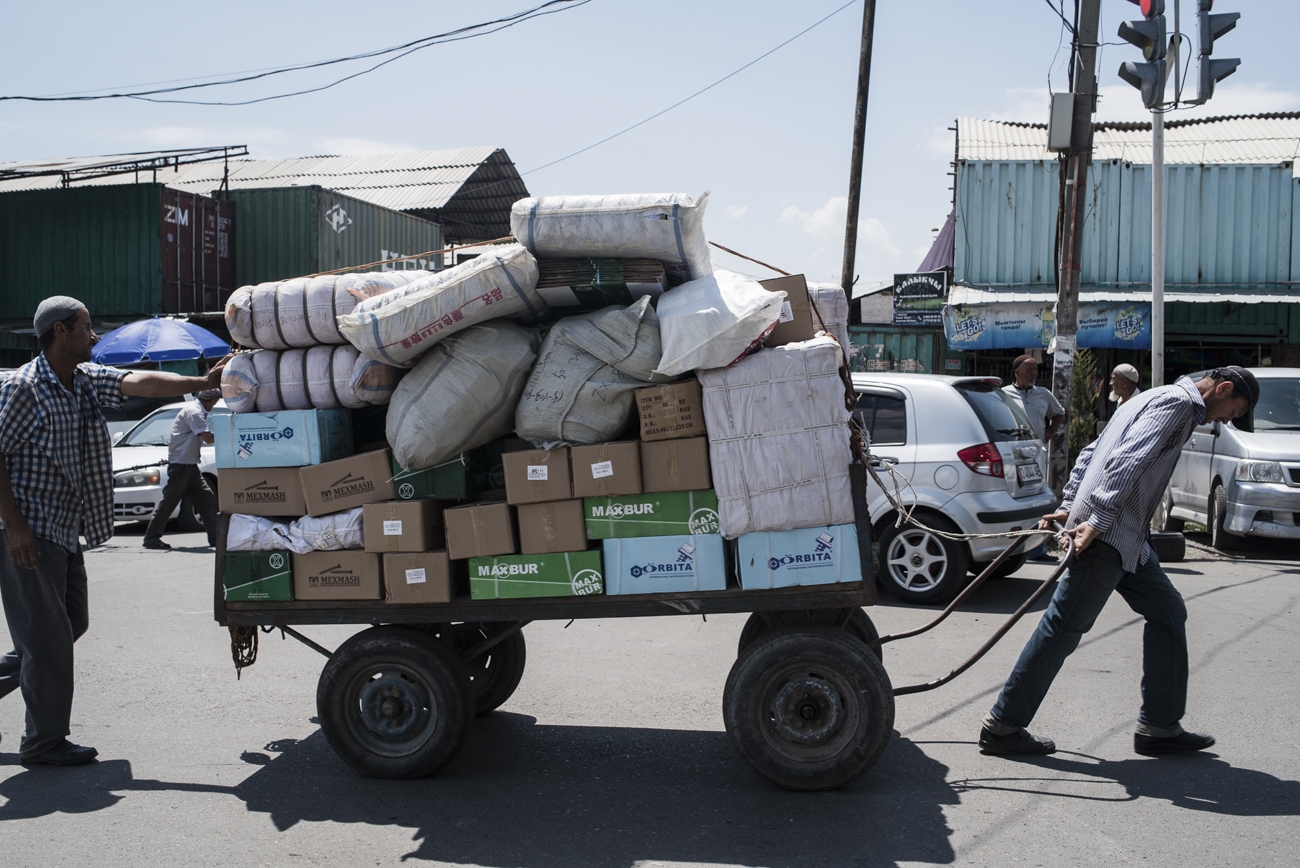 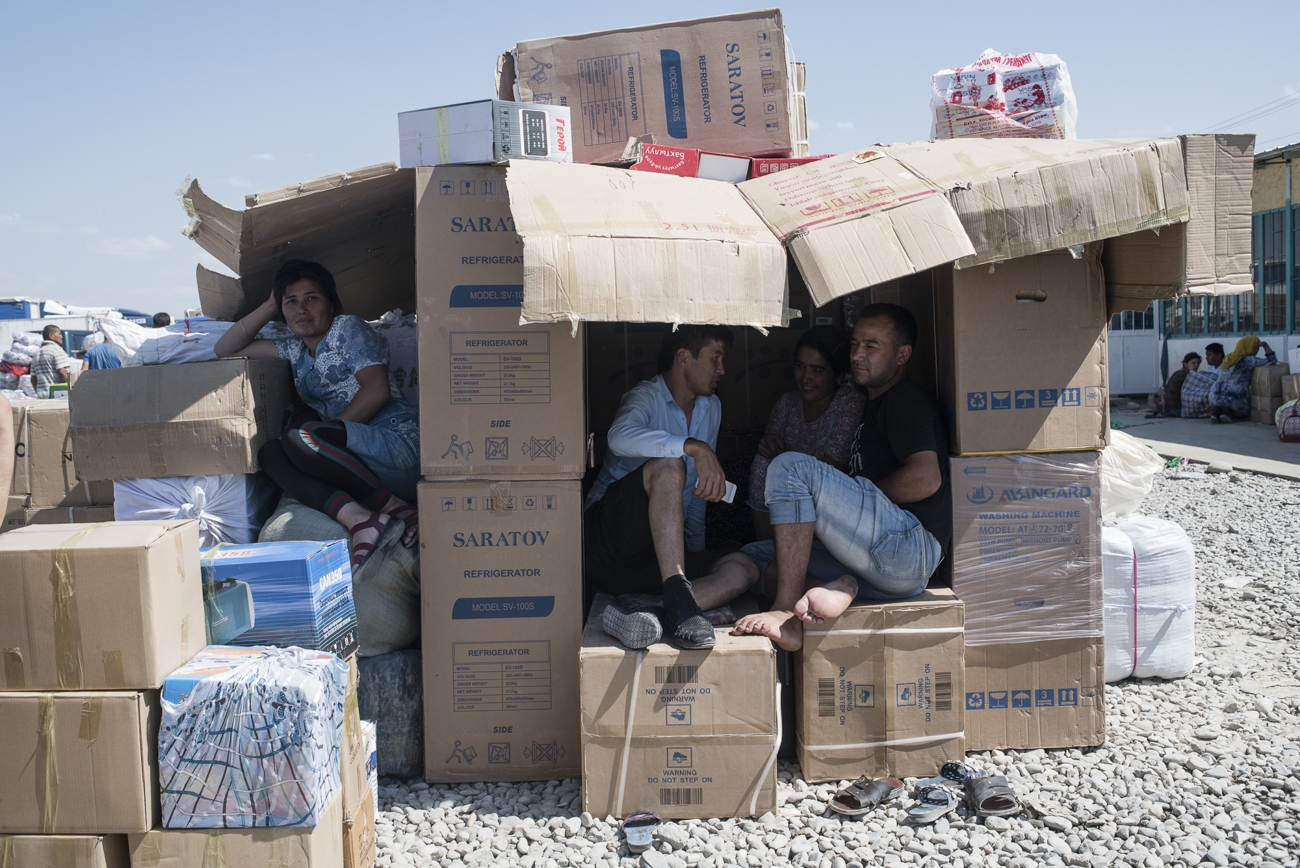 Citizens of Uzbekistan build themselves a shelter from the sun with boxes and refrigerators at the Dostuk checkpoint. 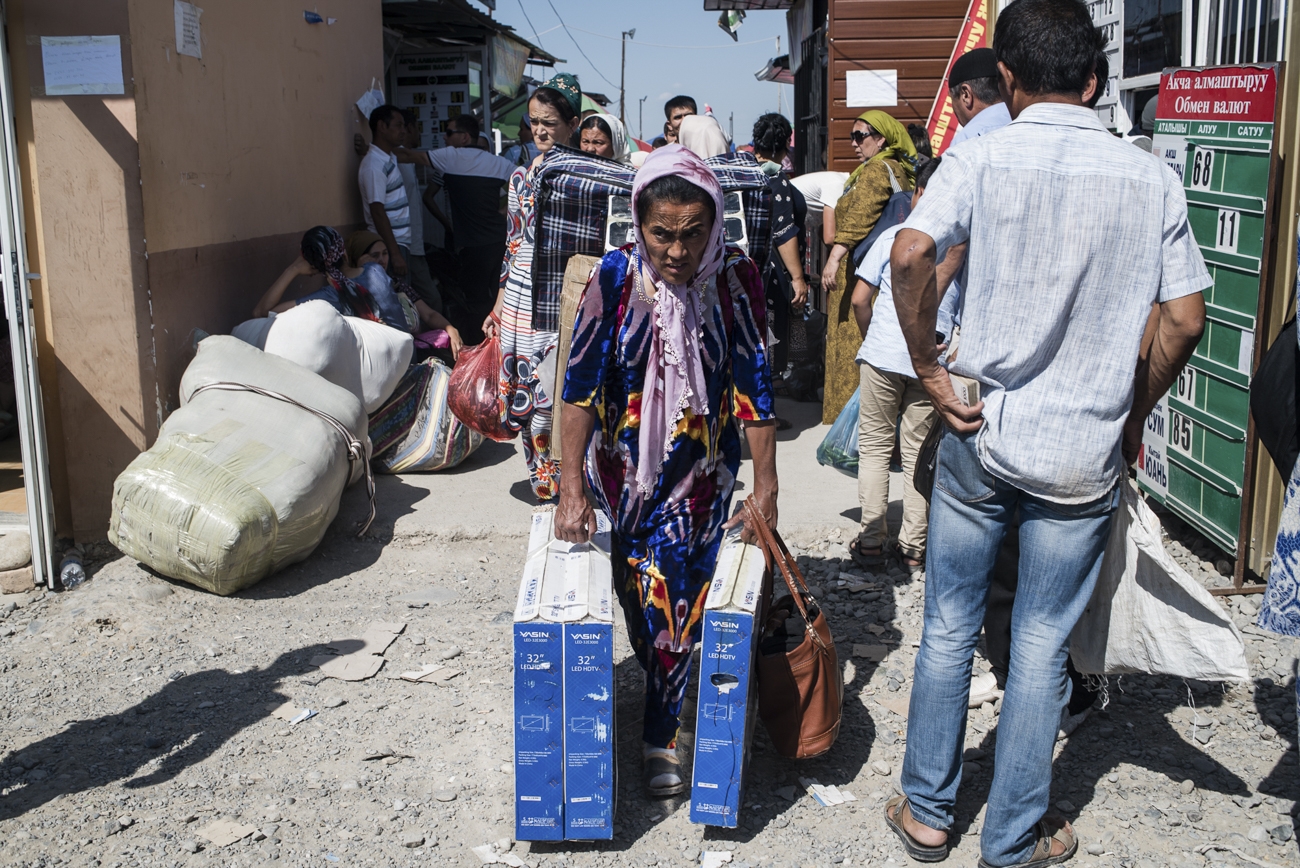 A woman carrying goods at the Dostuk border crossing. 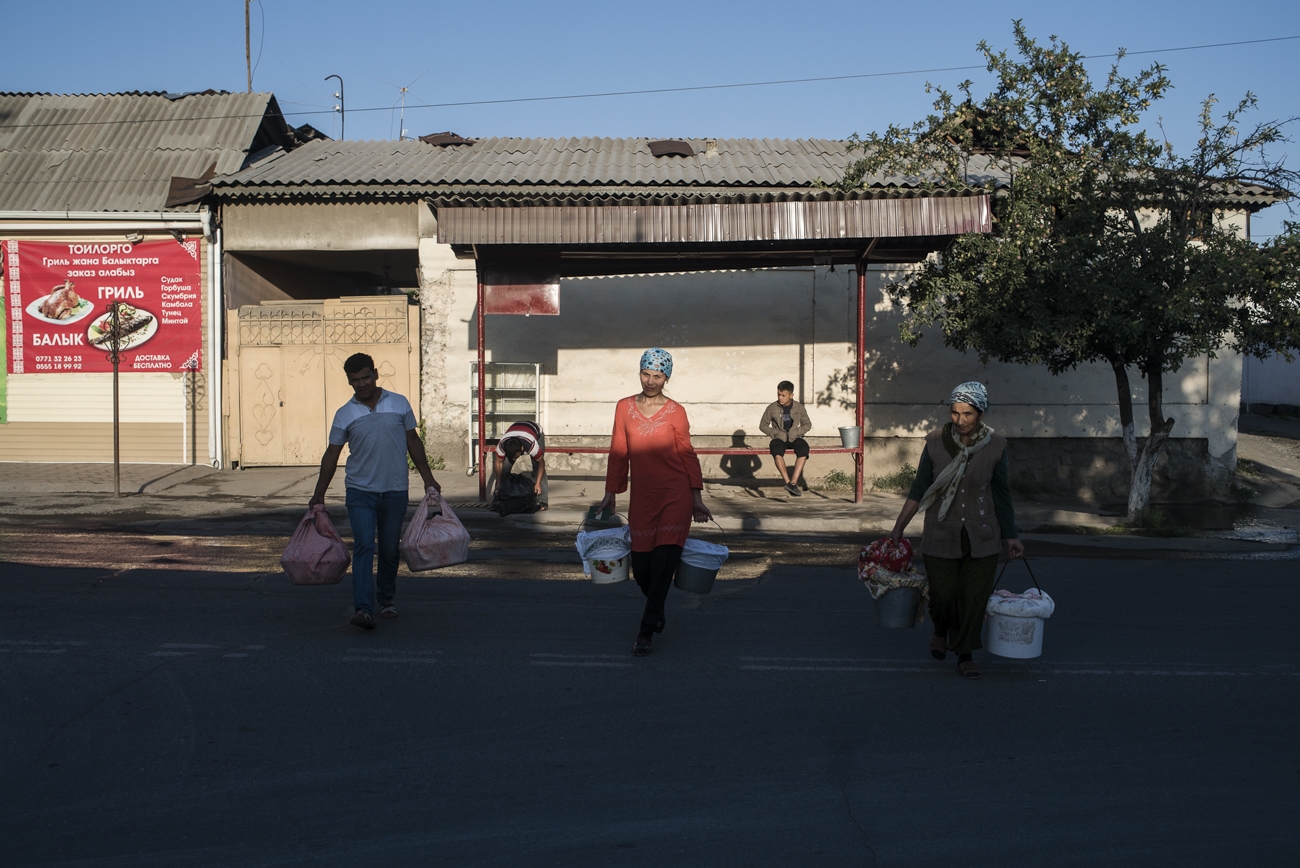 Farmers from Uzbekistan travel to the Teshik-Tash market in the city of Osh with their goods. 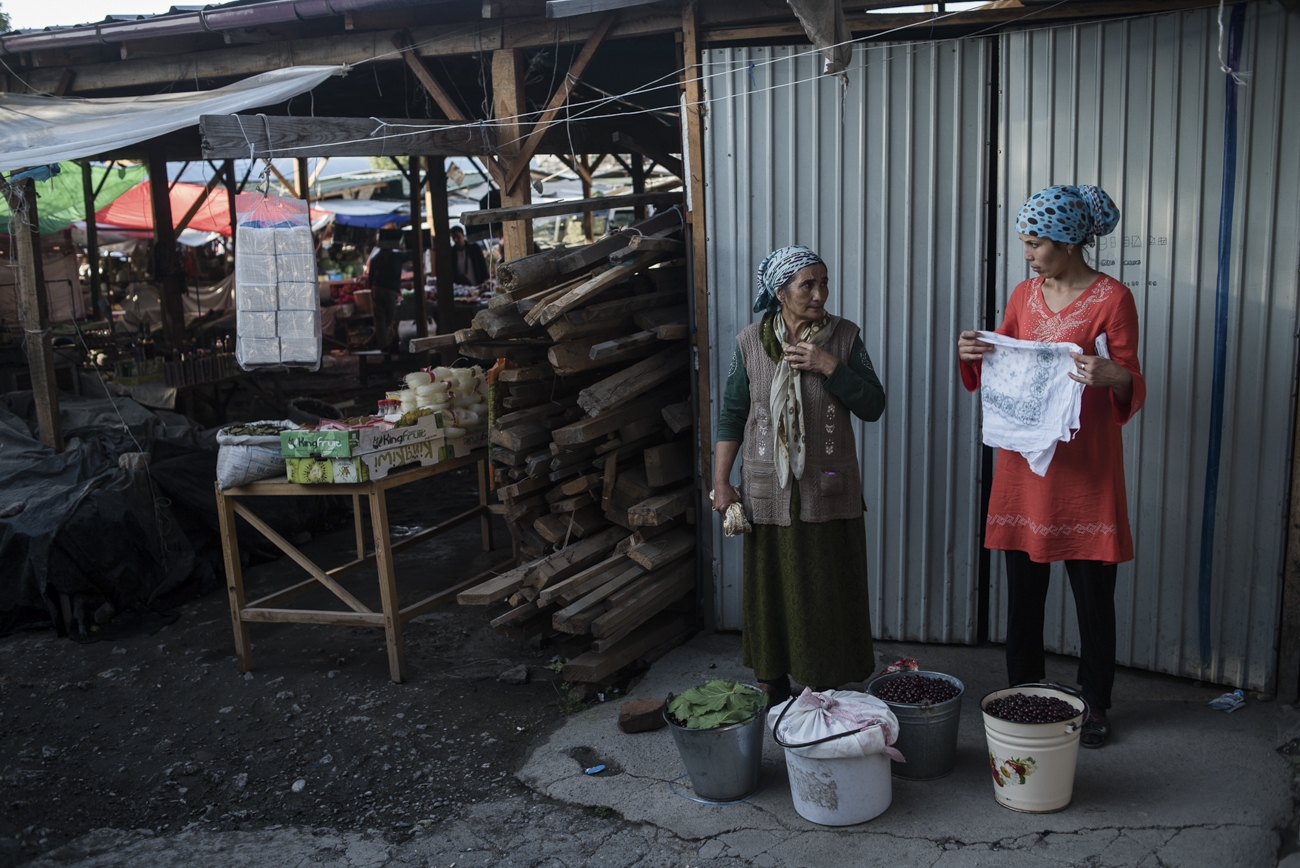 Uzbek farmers sell cherries in the Teshik-Tash market in Osh. 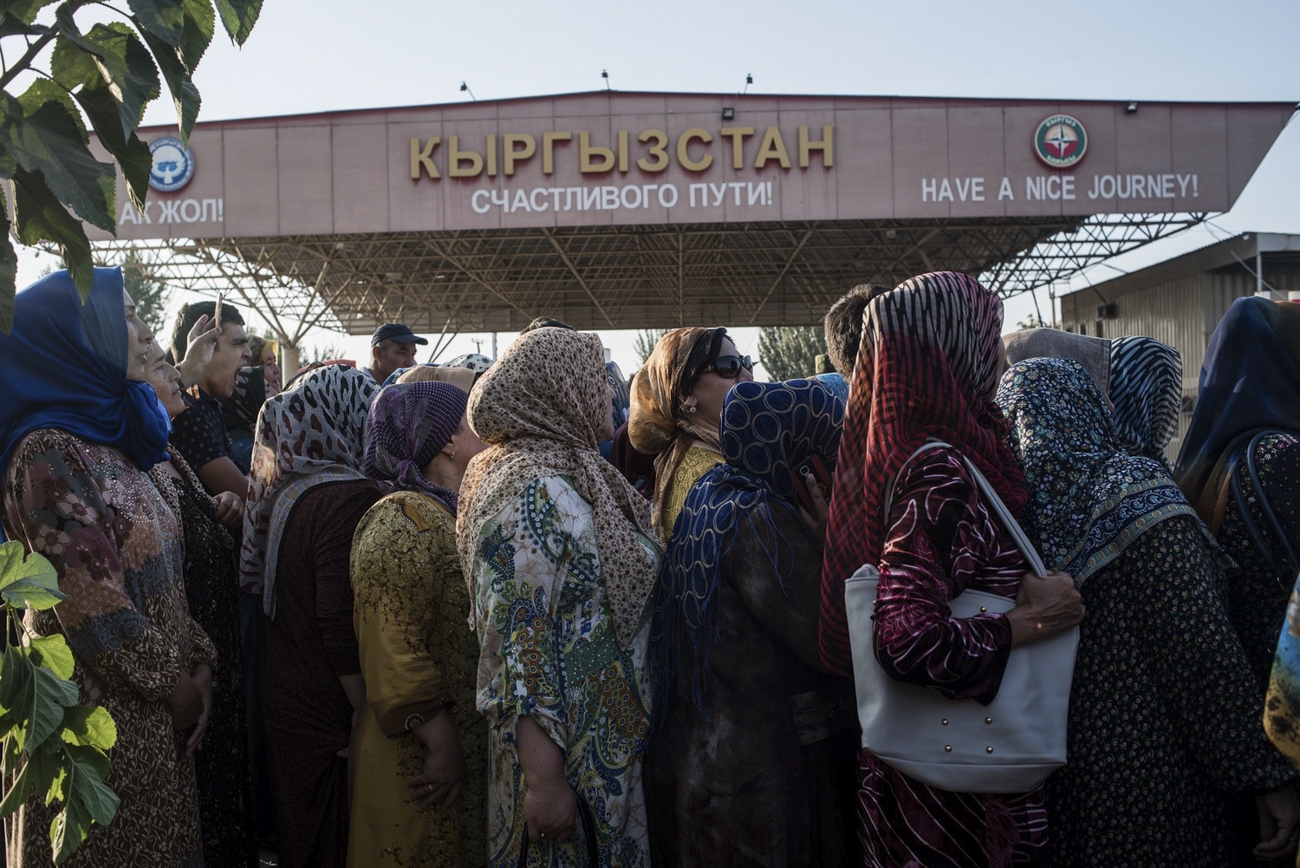 People watch a concert organized for the opening of the border between Uzbekistan and Kyrgyzstan at the Dostuk checkpoint on September 06, 2017. (Archive)
prev
next

In late June, the Dostuk crossing on the border between Kyrgyzstan and Uzbekistan was a suffocating crush of human activity. People carrying box-loads of goods waited for hours in vast lines under the punishing sun.

The scene would have been unimaginable even a year ago.

Dostuk (“Friendship”), which lies next to the southern Kyrgyz city of Osh, has been working around the clock since the fall of 2017. Until recently, Uzbek border officials were allowing only people with hard-to-obtain permits to cross there. Other than for funerals and weddings or similarly occasional events, getting the authorization was almost impossible. Now, any Uzbek or Kyrgyz citizen with a valid passport can pass.

This ease of movement is the outcome of Uzbekistan’s eagerly embraced good-neighbor policy. And communities in both countries were quick to seize the opportunity.

Once a month, 61-year-old Adinahon Mamadinova travels from Uzbekistan into Kyrgyzstan to visit her youngest daughter and other relatives. She was born and grew up in Kalinin, a Kyrgyz village some 30 kilometers from Osh. But when she turned 25, she got married and went to live in Uzbekistan. For seven years, she has seen little of her relatives in Kyrgyzstan.

“Thank God, the way is open now. Thank you to our presidents for this, because there are so many people like me. Many have been separated from their relatives,” Mamadinova said.

While the open border was first welcomed for family reasons, a boom in trade followed soon after.

Since the spring, Mamadinova and her relatives have been taking across tomatoes and cucumbers, which mature slightly earlier in Uzbekistan than in Kyrgyzstan.

And she is not alone. At 6 a.m., farmers from Uzbekistan begin to show up with their goods at Osh’s main vegetable market, in the Sheyit-Dobo district. Some bring truckloads of goods. Others, like Mamadinova, have smaller amounts to trade and get from the border to the bazaar by minibus.

When Eurasianet met Mamadinova in late June, she was hauling up to 50 kilograms of fennel, chives, summer savory and red peppers every day. In Osh, these herbs and vegetables sell for twice as much as they do in Uzbekistan.

“We live off trade. We’re helping out our kids a little, bringing up the grandchildren,” Mamadinova said. “If you work hard, everything will be fine anywhere you go.” 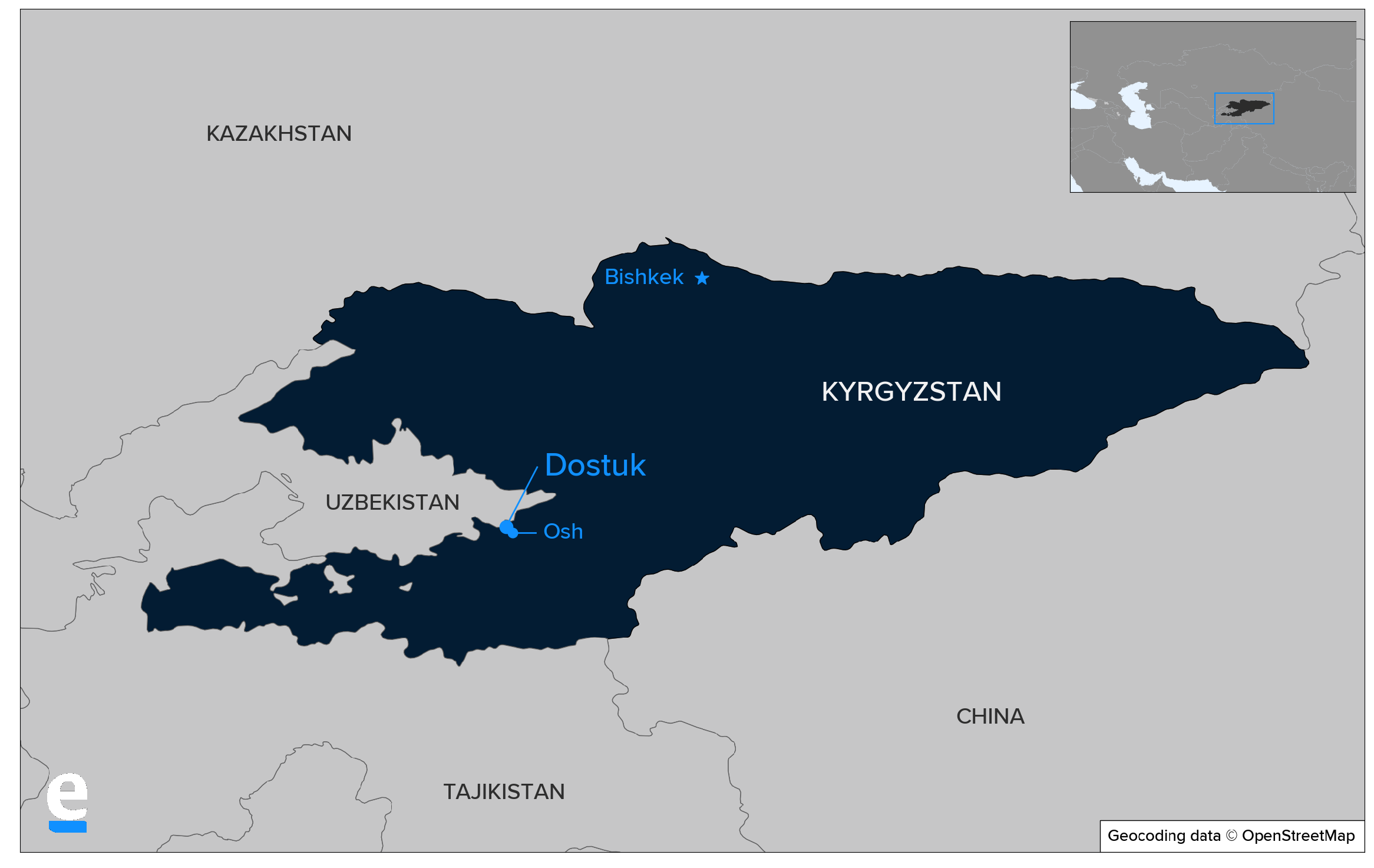 The real money is in carting household appliances from Kyrgyzstan to Uzbekistan.

The numbers are staggering. According to Kyrgyz border officials, by June, anywhere up to 18,000 people were crossing into Kyrgyzstan at Dostuk every single day. Many of those were arriving specially to collect refrigerators, televisions, cookers, air conditioners and microwaves, exploiting a loophole that allows travelers to bring over such items for personal use without having to pay duty.

“In Uzbekistan, we have a company called Artel, which makes fridges, but they’re more expensive. Goods from China are also more expensive once they go through customs, and we need to process a lot of documents,” said Maruf, one many Uzbek entrepreneurs acting as middlemen and organizers for this vast flow of goods. “This is more convenient because we can avoid the whole customs procedure.”

Household appliances like the kind Maruf, who offered only his first name, is taking across the border can cost around $50 to $100 more in Uzbekistan.

The way it works is that middlemen take orders from places like Zhakhon goods market in the Uzbek city of Andijan. The middlemen then put in the order with suppliers in the Kara-Suu market, a sprawling bazaar in Kyrgyzstan around 30 minutes from Osh that sources almost all its wares from China. Those goods then get driven by van to an improvised distribution point at Dostuk. The people performing the back-snapping task of hoisting the goods through the border are casual laborers, or mardikory, as they are known in Uzbek.

The system has been a boon to people like 24-year old Khursanali Djurabayev, who previously worked as handyman in his Uzbek village near the frontier. When the border regime loosened, he got a few jobs on building sites in Kyrgyzstan, where the pay is a little better. But after being cheated by employers a few times, he decided there was better money to be made transporting household appliances.

When Djurabayev crosses into Kyrgyzstan, he musters with others like him in a parking lot. The coordinating middlemen take photos of passports and collect phone numbers, just as a form of insurance. Then the mardikory get their daily load. Often this is a heavy fridge, tied up in rope and balanced precariously on the shuttle trader’s back. With a free hand, some can carry television sets or other smaller items.

And then for anywhere between five and 10 hours, or even more sometimes, the mardikory wait in the open air as border personnel process people one by one.

“For one load, they give me 300 [Kyrgyz] som [$4.4]. I have an injured hand, so I cannot carry more than two items at a time. But at least I am trained for this. I have been carrying things since I was a kid,” said Djurabayev.

When he was a handyman, Djurabayev made around $150 a month. Carrying appliances, he can earn up to $190.

“I use this money to pay for the travel and other things. I live on my own in an apartment, and I have to pay [rent]. With the money that’s left, I buy food. And then, Allah hu Akbar, it’s all gone!” he laughed.

Carrying the wares across the border is not an exclusively male preserve.

Khanipa Akhmatkulova had been waiting in line for more than a day when a Eurasianet correspondent met her. She was transporting two large boxes containing a fridge and a television. When the wait is too long, the crates can be turned into makeshift beds.

“There is no work on that side. We just survive. My husband is making money in Moscow. So I come over to Kyrgyzstan when I can find somebody to take care of the child,” said Akhmatkulova.

Nurlanbek Zhalbiyev, head of the border control department of the State Border Service, said four-fifths of the traffic at Dostuk is people carrying goods. He admits that they never expected such a vast volume of people.

“Initially, the throughput was within the norm. But the flow of people has increased two- to threefold. Of course, we cannot handle this, and the Uzbeks cannot handle it either. To make things more bearable, we have installed additional passport control booths, but it still isn’t enough,” Zhalbiyev said.

Many of the shuttle traders complain that the massive build-up of crowds has created ideal conditions for customs officials looking for backhanders. Nobody is willing to go on the record with these allegations, however.

The size of the crowds has created a secondary opportunity for resourceful entrepreneurs. The area around Dostuk used to be just wasteland. Now a bustling hub of commerce has risen on the spot. Once-abandoned stores have been freshly painted. Some stands exchange currency, others sell candy and there are even booths trading in airline tickets to Russia, Turkey and Dubai.

At the start of summer, 42-year-old Dilyaram Tajiyeva and her brother rented a retail space out of which they now sell Russian-made candy.

“Many people bought candy at Kara-Suu together with their larger purchases, be it appliances or fabric. But by the time the candy got to the border, it had melted. It is more convenient to buy it right here, from us,” Tajiyeva said.

Tajiyeva is an ethnic Uzbek from Osh, and although she speaks fluently with her ethnic kinfolk, she said the visitors still somehow feel foreign.

“Compared to Kyrgyz citizens, it is hard to work with Uzbeks. They are always trying to knock the prices down, to bargain. Our people are more generous. I prefer working with our people,” she said.

Tajiyeva used to work at the Kara-Suu bazaar, but her new spot is far closer to home. While she runs the store in the day, her brother takes over at night. It is a 24-hour-a-day business and the night is a better time to buy candy since there is less danger of it spoiling.

“Their import duty is very expensive in Uzbekistan, especially on Russian candy. They make pretty good stuff themselves, but Russian candy is nonetheless better. So they run over here to buy,” she said.

The traders at Kara-Suu are especially pumped by all this action. The bazaar had experienced something of a slump since 2015, when Kyrgyzstan joined the Russia-led Eurasian Economic Union, which required import tariffs with China to go up, a change that dealt a blow to the re-export sector.

But Khamrakhan Gaziyeva, who has been selling refrigerators, televisions and vacuum cleaners for the best part of 20 years, said she has never seen so much business as in the past three months.

"On refrigerators, we only sell at a margin of $3-5, so we can sell them faster. We cannot go over that. If before we sold 15-25 fridges a week, we now do that amount in a single day,” she said.

The number of bulky metallic containers that form the maze that is Kara-Suu bazaar has increased considerably since the Uzbek boom began.

“This trade is helping us to live a little, to feed our grandchildren,” said Gaziyeva.

For all this jubilation, however, the good times may vanish as quickly as they appeared.

Spooked by this sudden inflow of foreign goods, manufacturers in Uzbekistan have leaned on the authorities to clamp down. Accordingly, starting on July 1, day laborers were restricted to bringing in just one item per month for would-be personal use.

But when Eurasianet visited the border in the days before the new rule took effect, few seemed fazed by the change.

Olimjon Ismailov works as a cook in a canteen. He came through Dostuk every weekend to bring a fridge and earn some extra money for his three children.

The middlemen are scrambling to salvage their business. Maruf said he will just hire more people to carry their single permitted appliance. If he cannot pull off maintaining the high volume of goods, he said he will just return to Andijan to find some other line of work.

The rules have indeed had an immediate effect. Gulmira Borubaeva, a spokesperson for the Kyrgyz border service, said that since July 1, the daily crossing at Dostuk was no more than 9,000 people – a lot, but far short of the 18,000 seen at peak levels.

A policeman on duty at Dostuk was visibly relieved at this diminished number.

“Finally, for the first time in half a year, our guys can rest a little,” he said.

Nurjamal Djanibekova is a Bishkek-based journalist. Danil Usmanov is a photo and video journalist based in Bishkek.