Uzbekistan & Kyrgyzstan: Smugglers Own the Night 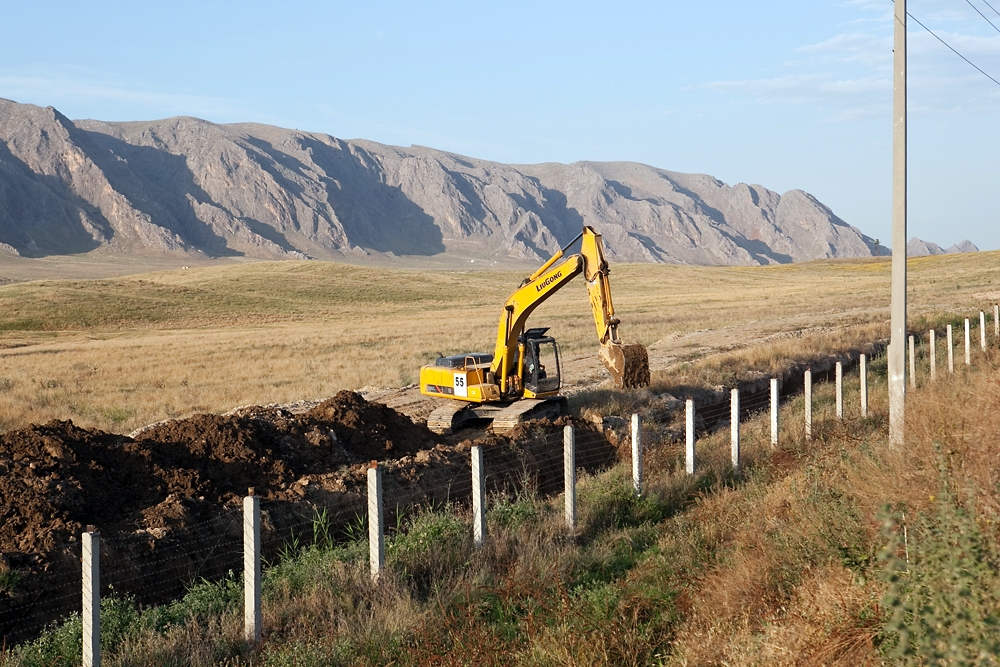 An Uzbek backhoe digs a trench in July 2010 to mark the Uzbekistan-Kyrgyzstan border. To stem the flow of illegal and smuggled goods in the Ferghana Valley region across the borders from Tajikistan and Kyrgyzstan, the Uzbek government has in the past few years built miles of barbed-wire fences and even dug trenches in many places. (Photo: David Trilling)

During the day, when Uzbek border guards patrol its streets, Mingdon is a sleepy Ferghana Valley town. But after night falls, Mingdon, a hamlet of 10,000 on Uzbekistan’s frontier with Kyrgyzstan, turns into a smugglers’ paradise.

From Kyrgyzstan come bundles of Chinese clothing, crates of electric Chinese appliances and an endless parade of Chinese comestibles. From Uzbekistan, smugglers ship fresh fruits and vegetables into Kyrgyzstan by the truckload.

The smugglers are dodging the most restrictive trade regime in Central Asia. Uzbekistan’s protectionist tariffs are designed to shield domestic manufacturers (which are state-affiliated) from competition. Most consumer goods, including food, clothing, appliances, and motor vehicles, are taxed at rates ranging from 40 percent to 100 percent.

To stop smuggling, in recent years Tashkent has built miles of barbed-wire fences and has even dug trenches in many places. Armed guards often shoot smugglers. Last month, border guards from Uzbekistan and Kyrgyzstan shot at each other, leaving one dead on each side.

If one believes Uzbek-state controlled media, anti-smuggling efforts have been largely successful. According to an early-July state television broadcast, the Uzbek customs service responded to 29,000 violations of the Uzbek customs law, initiated close to 900 criminal cases against smugglers, and confiscated illicit goods worth approximately 110 billion sums (about $60 million) in 2011. "Our borders are tightly controlled, and all violators are punished accordingly," said the broadcast.

Yet, evidence from small towns such as Mingdon shows that efforts to secure the border are failing. Mingdon is situated on a section of the border that is not fully delimited by Tashkent and Bishkek. Smugglers rely on hidden paths around town (some are located in private yards) to move goods.

"It is practically impossible for authorities to control illicit trade. The border is like a sieve," said a Mingdon state-paid employee who himself admits to smuggling clothing and small appliances at night.

There are no reliable figures on the volume of smuggled goods. In June, Muradyl Mademinov, a Kyrgyz MP, told local media outlets that he estimates $90 million worth of fruits and vegetables are smuggled from Uzbekistan into Kyrgyzstan annually. According to a 2011 study by Bishkek-based Central Asian Free Market Institute, goods that are illegally smuggled into Uzbekistan are primarily made in China, and consist of clothing and shoes (68 percent), kitchenware (19 percent) and electronic appliances (13 percent). Locals say the proportion of foodstuffs is growing each year.

According to Zarif, a small-business owner from Mingdon, huge profits are driving the trade. "On average, a smuggler can make $300 dollars a day, which is higher than the monthly salary of some state employees,” he said, adding that half of Mingdon’s residents moonlight as smugglers.

Large mafia-style syndicates employing hundreds of people are involved in smuggling, said a farmer from Marhamat, a town of 60,000 just across the border from Kyrgyzstan’s Aravan. Like most of the sources for this story, the farmer, who sells his produce to smugglers, was too afraid of reprisals to give his name.

"[Uzbek] customs officials and border guards have gotten very rich because of bribes [given by smugglers]. Border guards often look the other way while smugglers do their business. For the right price, they will also help smugglers transport goods," said the farmer. Uzbekistan ranked 177 out of 183 countries surveyed in Transparency International’s most recent Corruption Perceptions Index.

According to local residents, for years towns such as Mingdon and Marhamat suffered from economic decline. Now, thanks to illicit trade, the local economies are thriving.

"Real estate prices are booming. Prices for houses located immediately at the border (which are often used as storehouses) are the highest," said a high school teacher in Mingdon. "We no longer have to send our children to work in Russia [as seasonal labor migrants].”

Officials in Tashkent are aware of local governments’ lax approach to smuggling, said a Tashkent-based journalist who covers agricultural issues for a state-run newspaper.

“The SNB [security services, formerly the KGB] conducts systematic raids in border regions, arresting smugglers and officials who are involved in illicit trade, but they [smugglers and accused officials] tend to bribe their way out,” said the journalist. “It is no surprise to anyone – these days even the SNB is not clean anymore.”

Economists in Tashkent privately say the government should reconsider its draconian approach, liberalize trade and delegate more authority to local officials. But officials seem more interested in centralization and tightening control. “The SNB and border guards have orders to shoot at anyone who is involved in smuggling,” said the government employee-cum-smuggler from Mingdon. “But the risks do little to deter smugglers.”