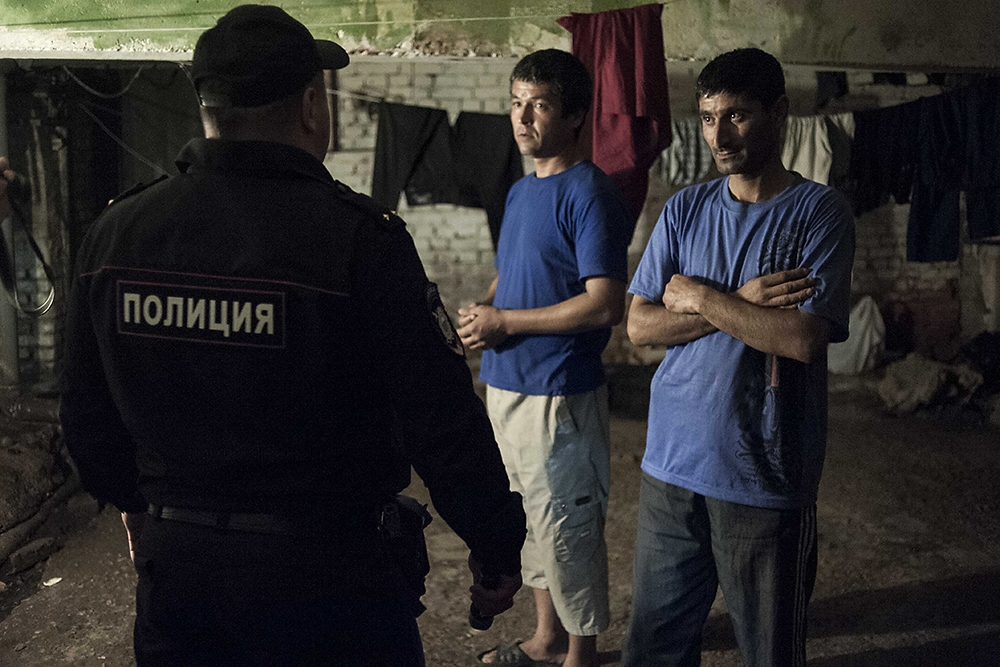 Russian police talk to Uzbek migrant laborers living illegally in an apartment basement in Moscow in September 2013. According to Russia’s official migration data for January, there are 1.9 million Uzbeks working in Russia – around 1 million fewer than during the same period in 2015. (Photo: Konstantin Salomatin)

When spring arrives, countless working-age men and women in Uzbekistan have traditionally embarked abroad in search of work.

This year, the annual migration is taking place against the backdrop of economic stagnation in the main regional labor market, Russia, and grumbles among officials in Moscow about a migrant-driven spike in crime rates. On top of that, Uzbek President Islam Karimov’s failure during a recent visit to Russia to secure a deal on simplifying migration rules for Uzbek citizens is galvanizing jobseekers to explore alternative destinations, although the options are meager.

According to Russia’s official migration data for January, there were 1.9 million Uzbeks working in Russia, marking a 15 percent drop over the number during the same period in 2015. The Central Bank in Moscow has said that remittances to Uzbekistan have plummeted, totaling $3.059 billion in 2015, down from $5.653 billion the year before.

April and May are the traditional months when most start leaving for Russia, although Tashkent residents Suyun Usmanov and his wife actually returned home from Moscow in March. Usmanov said that finding a job with a worthwhile salary has become tough in Russia.

“Migrant laborers can normally expect [monthly] pay of 20-30 thousand rubles (around $300-400), but if you want to have anything left over to send home, you need to make at least 40-45 thousand rubles per month,” Usmanov said.

The cost of living in Russia has gotten much more expensive with last year’s introduction of a new work permit. Obtaining the document requires migrants to undergo a battery of tests for HIV, tuberculosis, drug addiction and skin diseases. Permit holders must also buy health insurance, get a taxpayer identification number and pass an exam testing their knowledge of the Russian language, history and laws. All this has to be done within one month, or applicants face fines of 10 thousand rubles.

Once migrants have jumped through all the hoops, they must pay 14.5 thousand rubles for their work permit and another four thousand rubles every month to renew the document. All told, this costs almost $1,000 per year.

Russian government officials have taken to worrying out loud that financial pressures are driving migrants to crime. At the end of March, President Vladimir Putin held a meeting of top security officials, demanding that more be done to contain what he cast as a crime wave. “The unremitting crime rates among foreign citizens are causing serious concern, particularly since crimes of this nature draw a lot of public attention,” Putin told the officials.

The remarks were broadcast on television regularly over a five-day period. Nikolai Patrushev, secretary of Russia’s Security Council, said there had been 58 thousand recorded crimes committed by foreigners in 2015, an almost 6 percent increase over the previous year.

Moscow chief prosecutor Sergei Kudeneyev told Moskovsky Komsomolets newspaper in an interview last year that citizens of former Soviet Central Asian nations were responsible for committing the bulk of crimes attributed to foreigners in 2014. “If you create a ranking of criminality, you will find citizens of Uzbekistan at the top. They have committed 2,522 crimes; next is Tajikistan, with 1,745 crimes; and in third place there is Kyrgyzstan, whose citizens committed 1,269 crimes,” Kudeneyev told the newspaper.

Migrant laborers are themselves often targets of crime, be it physical intimidation at the hands of racist gangs, or being defrauded by unscrupulous employers. “Russian companies often use gray schemes. There is no transparency and they are often corrupt, which pushes migrants toward criminality. The conditions are not right for migrants to legalize their status and get above-board employment,” said Anvar Nazirov, a political analyst in Tashkent.

Uzbek authorities are not making things any easier for migrants.

Uzbek media reported that a deal was in the offing to streamline requirements for Uzbek laborers wanting to work in Russia. But 2015 came and went without a deal. Karimov’s visit to Moscow last month brought no breakthroughs on this front either. Instead, the focus of relations has been on increasing exports of Uzbek produce to Russia and possible oft-rumored arms deals.

All this is compelling many Uzbeks to consider other options. Nearby Kazakhstan has long been a favored alternative. Cotton harvesting starts in the fall and pay for that work in Kazakhstan is far better than in Uzbekistan. In addition, people in economically depressed western Uzbekistan flock to neighboring regions of Kazakhstan, typically for construction work. In some instances, there are also more skilled and qualified jobs going around.

Sarvar Hamidjanov, 22, said he first went to Kazakhstan when he was 17. These days, he and another nine natives of the city of Andijan have jobs as woodworkers at a furniture factory in Almaty. The monthly salary is $500, while board and food are paid for by the employer, Hamidjanov said.

“I like working here. The locals are very tolerant toward us, and we learned Kazakh very quickly. Our stuff sells well here. A couple of years ago, I went to Russia to earn some money, for about three months, but I couldn’t get used to it, so I came back to Kazakhstan,” he said.

Hamidjanov said that once he puts aside enough money, he wants to open a furniture business in Andijan.

The challenge for Hamidjanov and others is that Kazakhstan is now faring as badly as Russia as a result of the falling prices for oil, so options are dwindling there for the time being.

Lately, the United Arab Emirates has started drawing more interest, although the labor market there has mostly been cornered by Indian, Pakistani, Bangladeshi, Filipino, Chinese and Egyptian guest workers.

Gulnoza said she and her husband worked at a supermarket in Dubai for five years. Every month, they earned $3,000 between the two of them. Out of that, $500 went toward rent for accommodation, leaving behind a relatively tidy sum, Gulnoza said. “There are enough jobs to go around in the UAE, so that’s why many of our people work here. The main thing is not to break the migration laws, and they will leave you alone. With the money we earned here, we were able to buy an apartment and a car back home,” said Gulnoza, who asked for her surname not to be published.

Growing numbers are heading to Turkey. According to varying estimates, there are around 50 thousand Uzbeks living and working there. But that destination has been gravely complicated by the war in Syria, which means migrant laborers returning home for holidays are often subjected to interrogations upon arrival because of the government’s overriding concern about keeping a tight lid on Islamic radicalism.

Police and community leaders, as part of government antiterrorism activities, are tasked with keeping tabs on families of people who have gone to Turkey for work. One woman who worked in Turkey, Sevara Saatova, wrote on her Facebook account that she was summoned to a police station immediately upon her return to Uzbekistan.

“To begin with, I couldn’t understand why I had been summoned. And then they explained why this was all happening,” she wrote.

The ultimate preferred country among all emerging work destinations is South Korea, where Uzbeks primarily work in factories. Salaries in South Korea for Uzbeks are said to vary between $1,500 to $2,000 per month.

In an interview with a Tashkent television station, the head of the Uzbek agency for foreign labor migration, Ulugbek Nazarov, said 16.5 thousand Uzbeks are officially registered as working in South Korea. Looking to capitalize on this trend, the two countries in March signed a tentative memorandum of understanding on allowing for greater numbers of Uzbeks to go to South Korea in the future.