A case of a young man kicking a 54-year-old in Samarkand has sparked widespread indignation. 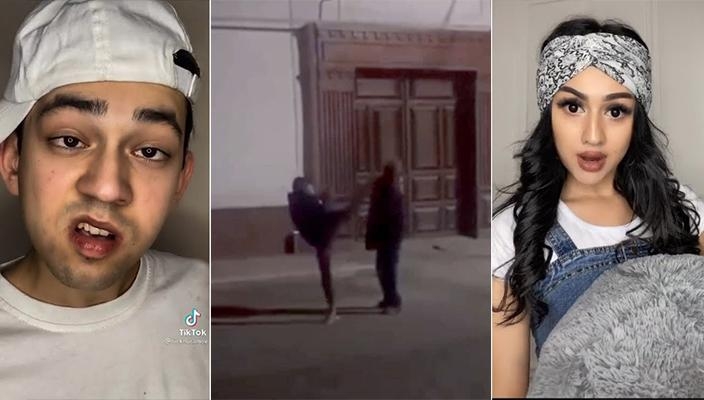 Incriminating evidence?: The screenshot produced by Adolat in its call to ban TikTok.

A political party this week issued a call for the government to block access to the popular Chinese-owned video app and urged officials to ban censorship-ducking VPN software for safe measure.

In making its case, Adolat (Justice), the third-largest party in Uzbekistan’s parliament, said in a February 1 statement that the “hysteria of TikTokerism” was having a detrimental effect on young people. The statement was accompanied by a screenshot from footage, believed to have been filmed in the city of Samarkand on January 24, showing a young boy delivering a roundhouse kick to the face of a middle-aged man.

Police in Samarkand have confirmed the incident took place and said that a 15-year-old boy had been detained. The victim of the assault was a 54-year-old man, police said.

The footage of this apparent assault sparked immediate howls of indignation across social media in Uzbekistan. Disrespect against older citizens is a particularly hallowed taboo in Uzbek society.

Adolat argues that the episode confirms its position that TikTok is harmful to “national values and provokes aggression and hooliganism.”

It is not the first political party to adopt this position. In September, the traditional values-promoting Milliy Tiklanish party made a similar proposal following the circulation of a brief video showing school students giggling and swearing during a lesson at school.

“The party believes that the TikTok social media platform, which mainly broadens its membership base through the demonstrative display of law-breaking, is a dangerous forum for children and that the operations of the network should accordingly be restricted,” Milliy Tiklanish deputy chairwoman Feruza Mukhamedjanova said at the time.

Uzbekistan has repeatedly attempted to keep citizens away from what it deems to be problematic messaging software and social media. TikTok, Twitter, VKontakte and Skype have been unavailable since July to anybody using the internet without a VPN. Authorities have cited personal data protection regulations as the basis for this policy.

The government’s dislike of TikTok has manifested in other ways too. In December, a planned Tashkent concert featuring Russian TikTok stars was scrapped following an intervention from the authorities.

But TikTok is not without its defenders. They have included important figures like Tashkent Mayor Jahongir Artikhodjayev and Justice Minister Ruslanbek Davletov.

Timur Alikhanov, a well-known TikToker from Tashkent, condemned the actions of the Samarkand teenager identified in the video cited by Adolat, but he says that talk of banning the app are absurd.

“The boy who kicked the man in the video is a degenerate and what he did is low and disgusting behavior. But he didn’t do it because of TikTok, that’s for sure. We just love putting the blame on social media,” Alikhanov told Eurasianet.

Another prominent TikTok star, Yaroslav Nikonenko, said that the makers of the app are themselves in any case working to limit harmful content.

“Any kind of animal abuse, or immoral and sexual content is immediately blocked. But these conservative-minded people, they do not want to understand how this social network works. They think it’s the app’s fault that people are like this,” he told Eurasianet.

TikTok has struggled with moderation in the past, however. An investigation by the Financial Times in 2019 discovered ample evidence of violence, hate speech, bullying and sexually explicit content being disseminated through the app. The company has since pledged to tighten its moderation policies.

TikTok also stands accused in some cases of using excessive and selective moderation, particularly on matters deemed undesirable by the Chinese government. The Guardian newspaper reported in September 2019 that the social network was specifically instructing moderators to censor any content referring to politically sensitive issues like Tiananmen Square and Tibetan independence. And in March 2020, investigative website The Intercept cited leaked documents to report that TikTok was also telling “moderators to suppress posts created by users deemed too ugly, poor, or disabled” as a way of maintaining the strong commercial appeal of the app.