Uzbekistan: Life After Karimov, More of the Same 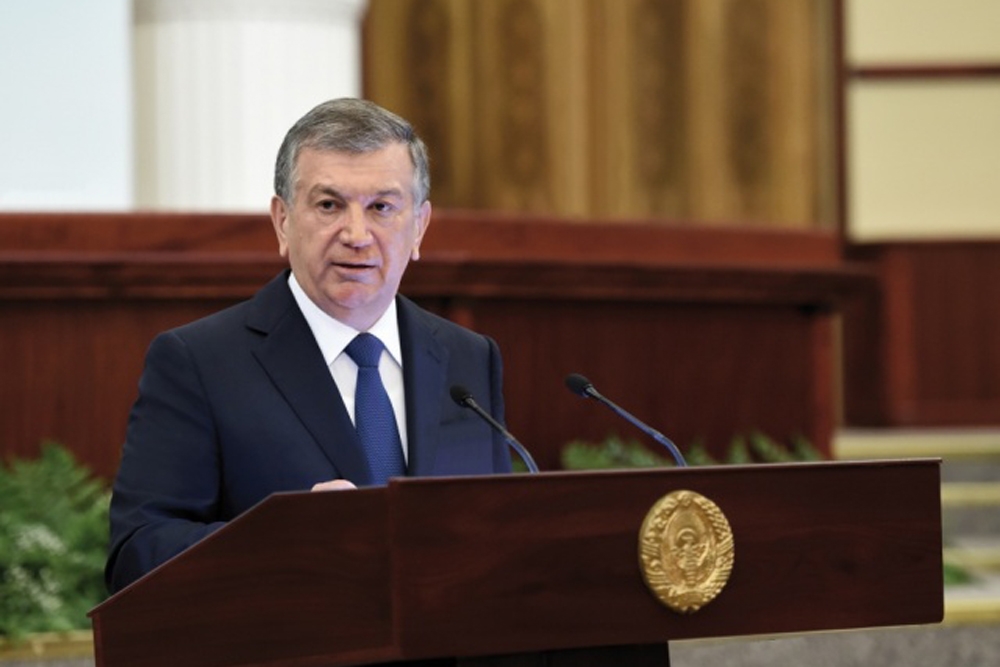 Shavkat Mirziyoyev addresses the Uzbek parliament after he was formally confirmed as the country’s interim president on September 8. On his first day in charge in Uzbekistan, Mirziyoyev made it clear that he does not intend to make any immediate breaks from the policies of his deceased predecessor, Islam Karimov. (Photo: The Government Portal of the Republic of Uzbekistan)

On his first day in charge in Uzbekistan, Shavkat Miromonovich Mirziyoyev made it clear that he does not intend to make any immediate breaks from the policies of his deceased predecessor.

At the same time, Mirziyoyev spoke about the priority of developing relations with the Commonwealth of Independent States — the post-Soviet space dominated by Moscow — and the “consistent and comprehensive strengthening of friendly relations with the Russian Federation.”

Referring to historic treaties signed between Moscow and Tashkent, Mirziyoyev said the documents “met the interests of both nations and serve to bolster stability and security in the region.”

As for ties with the United States, Mirziyoyev reserved only a pro forma hope that relations would flourish in the spirit of “mutual and constructive cooperation” — post-Soviet code for non-interference in domestic rights issues.

Covering all his bases, Mirziyoyev also noted that he wished to see a further strengthening in Uzbekistan’s comprehensive strategic partnership with China.

On the domestic front, Mirziyoyev signaled his intent to continue Karimov’s course, describing the late president’s legacy as one of “democratic reforms and transformations in the political, economic and social spheres.”

The interim leader stressed the need to preserve inter-ethnic harmony, rule of law and “strict observance of the rights and freedoms of citizens.”

His emphasis on the need to strictly observe legal norms contrasted with the way in which he was appointed to the interim presidency.

Under Article 96 of the constitution, Senate chairman Nigmatilla Yuldashev should have been installed as temporary leader, serving as a caretaker until a special election could be held. The vote is also mandated to take place within three months of the incumbent’s death or incapacitation. Yuldashev did occupy the role for the shortest of time, receiving notes of condolence for Karimov’s death from Russian President Vladimir Putin and Kazakhstan’s President Nursultan Nazarbayev.

But on September 8, Yuldashev ostensibly relinquished of his own accord his claim to his constitutionally guaranteed role. In making way to Mirziyoyev, Yuldashev appealed to what he described the new interim leader’s many years of experience in leading government positions and his “standing among the population.”

Mirziyoyev’s elevation to the interim presidency was approved in a joint resolution by the lower and upper houses of parliament. An announcement followed on state television’s evening news program.

Uzbek journalist Elparid Hadjayev said that many in Uzbekistan had expected a more “civilized” transition.

“I think that Nigmatilla Yuldashev would have felt very uncomfortable in the position of interim president. His is not a popular figure [and] most people in the country don’t know him. Clearly that is why they picked a person that is in control of the situation in the country,” Hadjayev told EurasiaNet.org.

Writing on his Facebook page from France, Uzbek political analyst Kamoliddin Rabimov predicted that Uzbekistan was in for some difficult times.

“The new authorities have begun their course with unconstitutional measures. The authorities should think of their reputation and about their legitimacy in the eyes of the people, otherwise they will not be able to solve urgent problems of state,” Rabimov wrote.

One curious theory was offered to Russian state news agency Sputnik by an unnamed Uzbek political analyst. The analysts suggested that Mirziyoyev’s ascendancy means a likely end to the political fortunes of another figure named as a possible successor to Karimov — deputy prime minister and finance minister Rustam Azimov.

“Azimov was a confidant to Karimov in the government; he was his eyes and ears. He told him everything that was going on there. He wasn’t liked for that, and Mirziyoyev didn’t like him for that,” the analyst told Sputnik. “I think that until the elections the president will make no sharp moves, but after the election he will pack Azimov off somewhere as an ambassador, maybe in one of the Benelux countries.”

With major personnel changes possibly on hold until after the special presidential election, observers have only Mirziyoyev’s biography and insights into his personality to work with in trying to guess what policies his administration will pursue.

Ominously, he first came to wide public attention around 2000 in connection with his role in the annual forced cotton harvest campaign. The Uzbekistan Human Rights Society noted in a report that year that Mirziyoyev, who was then governor of the Jizzakh region, had allegedly gone into the fields to physically batter the deputy dean of the Jizzakh Pedagogical Institute because his students were doing a bad job picking cotton.

A caustic early assessment of Mirziyoyev came in 2003 from a political commentator known as Usmon Khaknazarov, when the now-interim president was still the governor of his native Samarkand region.

“You could call Mirziyoyev a young Karimov. He is similar to the president in every way. During his stint as the governor of Jizzakh region, he regularly made a public show of beating up the heads of district administrations. He continues the practice of vicious beatings to this day in his job as governor of Samarkand,” Khaknazarov wrote.

Khaknazarov was always described as a political analyst, although he is believed by some to be a composite figure of government critics.

Others point to Mirziyoyev’s family ties as a clue. His niece was married to Babur Usmanov, the nephew and one-time dauphin of Uzbek-Russian billionaire Alisher Usmanov. Babur Usmanov died in a motor accident in Tashkent a few years ago, but relations between the billionaire and the interim president are said to still be warm. All this is presumed to be indicative of Mirziyoyev’s marked pro-Russian leanings, although the link is tenuous.

The official biography charts the career of a bog-standard Soviet and post-independence agricultural apparatchik.