Uzbekistan: Long Road to Exile for the Crimean Tatars 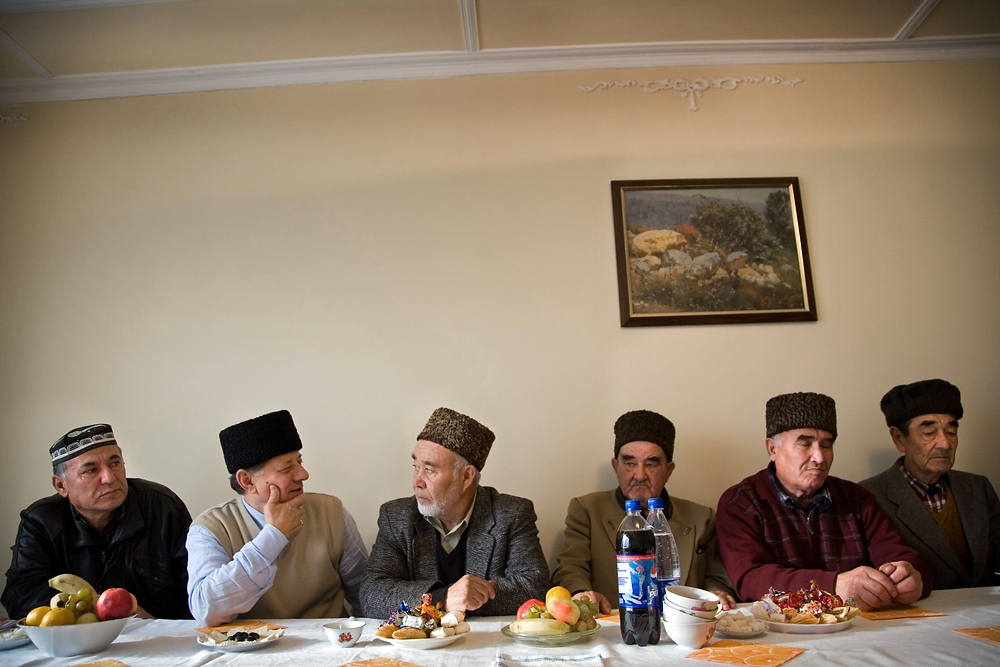 Rauf Ibragimov was 15 years old when he emerged from a Soviet cattle car into the searing hot desert of Uzbekistan, exactly 70 years ago this week.

Now 85, Ibragimov still has fresh memories of the day Red Army troops arrived in his village to condemn his family as “enemies of the people,” force them out of their home on the balmy Crimean peninsula, and send family members on a grueling 4,000-kilometer journey into exile in Uzbekistan.

“In the evening some soldiers brought some vehicles – lots of them – to the school,” Ibragimov (whose name has been changed to protect his identity) told EurasiaNet.org in an interview in the small apartment where he lives alone in a suburb of Uzbekistan’s capital, Tashkent.

“We kids were out and about in the evening and we saw the cars. … In the morning, really early, two soldiers came: Get ready – you’re leaving. Where to? No one knew where.”

The villagers were given 15 minutes to prepare and told to take one day’s worth of food, but “no need for your things,” Ibragimov recalls in a shaky voice, piecing together his seven-decade old memories. He was bundled with his parents and six siblings onto a train: “It was a cattle wagon,” he recalls, speaking Russian interspersed with snatches of Crimean Tatar. “There was manure – it stank.”

“We left on May 18, and on June 3 or 4 we arrived in Uzbekistan,” he said. The exiles were dumped out of the boxcar in an area “at that time known as the hungry steppe,” somewhere near Guliston in eastern Uzbekistan.

Ibragimov was one of 185,111 inhabitants of Crimea deported from their homeland in a lightning operation involving 32,000 troops between May 18 and May 20, 1944. The deportations – known in Crimean Tatar as surgunlik (“exile”) and dramatically recounted in the acclaimed 2013 film Khaytarma (The Return) – constituted a collective punishment for alleged collaboration with the Nazis during World War II.

During the war “many Crimean Tatars betrayed the Motherland, deserted from Red Army units defending Crimea, and defected to the side of the enemy,” states the deportation decree signed by Josef Stalin.

Some Crimeans did fight for the Nazis (8,684 by one estimate), but the price was mass deportation – 238,500 people were exiled in all, including the entire Crimean Tatar population, the Greek and Bulgarian minorities, and – ironically – Tatars fighting in the Red Army against Germany, exiled as traitors immediately after they were demobilized.

The majority of deportees (82.5 percent) were dispatched to Uzbekistan, where Ibragimov’s family was sent to a collective farm to live in a mud hut where “there were no doors or windows, nothing, just reeds” on the floor to sleep on. Many deportees perished from malnutrition and disease en route, or amid the harsh conditions on arrival.

Among the exiles was six-month-old Mustafa Jemilev, currently a Crimean Tatar leader who recently was banished for a second time from his homeland following Moscow’s annexation of Crimea from Ukraine in March.

The Crimean Tatars were not the first or last victims of Stalin’s deportations: nationalities that were forcibly uprooted in the 1930s and 1940s included Poles from the western Soviet Union; Germans from the Volga region; Chechens, Ingush, and Turks from the Caucasus; and Koreans from the Far East. Many wound up in Central Asia, with far-reaching demographic repercussions.

Deportations were carried out for ideological reasons, to punish groups whose loyalties were suspect – but they also had a practical purpose, to bolster the workforce needed for collective farming and industrialization drives in Central Asia.

As a teenager Ibragimov first worked as an agricultural laborer – “in the cotton fields, digging, whatever” – before being sent to a textile factory in Tashkent.
The stigma of “betrayal” of the motherland stuck to the Crimean Tatars – and landed Ibragimov behind bars: he was jailed for a year after striking a colleague “because she called me a Crimean Tatar turncoat.”

After Stalin’s death in 1953, restrictions on deportees were eased, but they were not allowed to return. Soviet Uzbekistan became a hotbed of Crimean Tatar activism, and the young exile Jemilev was a firebrand in the movement petitioning the Kremlin to rescind the label of treason and allow the Tatars to go home.

Jemilev – who this week received a Polish award for “services to democracy”  – spent a total of 15 years in Soviet labor camps and jails for his activism, once staging a 10-month hunger strike behind bars. He was finally freed in 1986.

Former Communist leader Mikhail Gorbachev’s liberalization campaign, or perestroika, enabled Jemilev and tens of thousands of other Crimean Tatars to return to their homeland after 45 years in exile. By 1995, some 250,000 had returned; Uzbekistan’s Crimean Tatar population decreased from 188,772 in 1989 to 10,046 in 2000, a 95 percent drop in just over a decade.

More recently, some Crimean Tatars in Uzbekistan have seen their return plans dashed by Russia’s takeover of Crimea.

Rustam Ilyasov (a pseudonym), born to exiles in Uzbekistan and now in his fifties, has been building a house in his ancestral village for several years and was planning to move next year.

“Now there are Russian soldiers living in my house, apparently,” he told EurasiaNet.org. “If I go to Crimea there’s no guarantee I won’t be sent to Magadan or somewhere at the butt of a rifle. … I don’t want to go there until Crimea is returned to Ukraine.”

Ibragimov was not among the returnees: his late wife was too sick to travel, and he will live out his days in exile in Tashkent. Nowadays he does not bother keeping up with the news from Russian-occupied Crimea. “Whatever’s happened or hasn’t happened, what difference does it make to us?” asks the old man, with a resigned shrug.