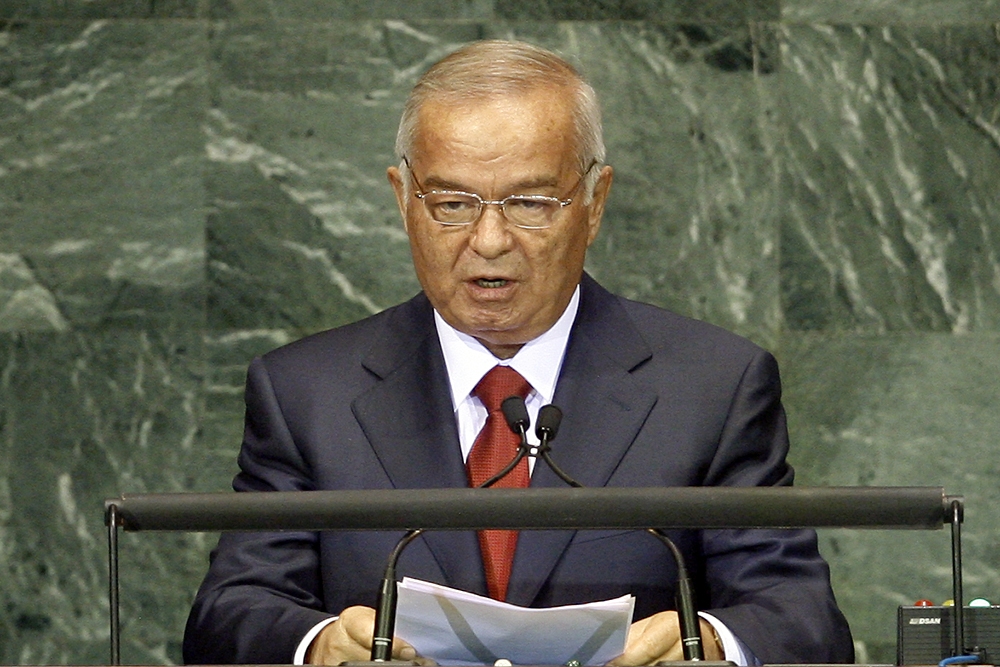 Karimov, who will soon turn 77, is expected to run again for president. (Photo: UN)

Uzbekistan has set a presidential election date for March 29. What isn’t clear is whether Islam Karimov, the man who has run the country with an iron grip since the Central Asian nation gained independence, will be a candidate.

Though widely expected to run, Karimov has not formally thrown his hat into the ring. His plans are likely not to become clear until candidates are nominated in late January. If he’s in the race, he would be widely expected to win by a customary landslide.

It is “very likely” Karimov will run, Alexander Melikishvili, a Washington-based analyst at the IHS Country Risk think-tank, told EurasiaNet.org. “Karimov sees himself as the father of the Uzbek statehood and he is unlikely to give up the presidency until he dies or becomes incapacitated.”

Karimov, the president of independent Uzbekistan since 1991, is technically ineligible to stand owing to term limits, but he has stayed in power for two-and-a-half decades by manipulating the constitution, and could do so again.

In Uzbekistan’s top-down system, “rules relating to political representation or time limits are mostly formal, and can be circumvented with relative ease,” pointed out David Dalton, an Uzbekistan analyst at the London-based Economist Intelligence Unit.

Sanjar Umarov, a Karimov opponent who has experienced both jail and exile as a result of his political activities, would like to see this election serve as a catalyst for change.

“This is a good opportunity to start changes – changes for a peaceful transition of power in Uzbekistan,” Umarov, who served four years in prison on corruption charges internationally condemned as politically motivated before being amnestied and moving to the United States, told EurasiaNet.org. “Let him step aside, and let a real democratic election happen in Uzbekistan.”

It’s hard to envision the vote as being the catalyst for anything good, countered Nadejda Atayeva, a France-based human rights campaigner exiled from Uzbekistan. The country lacks the basic conditions for a democratic vote, she stressed. “Democracy is above all the opportunity to freely express your opinion, plurality of opinion, freedom of association – and all that is lacking,” she said.

Under the influence of a tightly controlled state media spouting relentless propaganda about the benefits of stability, as well as about the threats posed by upheaval elsewhere in the former Soviet Union and beyond, many voters will willingly cast their ballots for Karimov, one Tashkent resident said. “Some people want change, but I’d say more people want stability,” he told EurasiaNet.org. “They’ve been brainwashed.”

Despite his advancing age – Karimov turns 77 on January 30 and would be 82 at the end of another presidential term – analysts believe he has more reasons to cling to power than to court the uncertainty that stepping down would bring.

A key factor in Karimov’s political calculus is “concern over maintaining immunity for [his] family after he steps down,” said Melikishvili. “By extending the presidency, the resolution of this question is delayed.”

The family looms large over this election, which follows a period of bitter behind-the-scenes infighting centering on the president’s eldest daughter Gulnara Karimova, once considered a possible candidate to succeed Karimov but now under house arrest in Tashkent under investigation for corruption.

“If Gulnara's rapid rise and spectacular fall have damaged relations among elite groups, Mr. Karimov might choose to stand again, as he has already hinted, in order to protect the interests of his family and associates – assuming that he remains well enough to do so,” Dalton told EurasiaNet.org, referring to unconfirmed rumors of Karimov’s ill health. (Such rumors have abounded for years).

Karimova has painted her downfall as part of the presidential succession battle, accusing arch-rival Rustam Inoyatov, the powerful head of Uzbekistan’s security service, of plotting to seize power. But analysts have doubts about the credibility of Karimova’s analysis.

Her troubles are likely due to the “negative limelight” she shone on the Karimov family and on Uzbekistan through her involvement in a Swiss money-laundering investigation and related corruption cases, Melikishvili said.

For Dalton, she is “too over-the-top, and attention-seeking to have any chance of becoming an arbiter among the various regional security and business groups, which is what her father's role as president has been.”

“In a sense, the removal of the president's daughter, Gulnara Karimova, from the political scene, seems to show what her father is – the head of a team, whose members have their own interest, ambitions and constituencies to satisfy,” he said, warning that it would be erroneous “to mistake the leader for the system.”

There is still an outside chance Karimov will anoint a successor for this election, with Shavkat Mirziyoyev, the prime minister, and Rustam Azimov, his deputy, tipped as candidates.

But even if Karimov is re-elected, his age makes the unresolved succession question ever more pressing. It is a question that may ultimately be resolved by the inner circle closing ranks, observers suggest.

“Some variation of the ‘Turkmen model’ appears plausible in Uzbekistan whereby a small circle of kingmakers will decide on who will be the next ruler without destabilizing the political situation in the country,” says Melikishvili, referring to the intrigues that brought Turkmenistan’s Gurbanguly Berdymukhamedov to power in 2006 after his predecessor died suddenly.

“With civil society ravaged by years of repression, it still seems that another strong figure will emerge from within the power groups as the arbiter between them –  probably from the security services,” said Dalton. “Unfortunately for Uzbeks, therefore, the next regime is likely to resemble the current one strongly.”