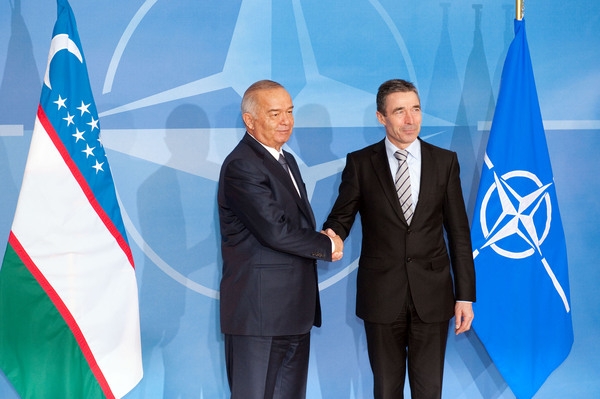 A recent piece in Uzbekistan's state-sanctioned media has advocated joining NATO and taking over the territory of Tajikistan, Kyrgyzstan, and most of the rest of Eurasia. The piece, published on 12news.uz, was taken down shortly after being published, but was preserved on inoSMI.ru.

The piece, at nearly 9,000 words, offers a number of controversial (to put it kindly) claims: that Tajiks are merely Persian-speaking Uzbeks, that Uzbekistan is the successor state to the Mongol Golden Horde, that the agreement between Russia and Kyrgyzstan to develop hydropower plants is invalid because it misspells "Kyrgyzstan," among many others. Its main thesis, however, is that the "threats of a natural-technical character" -- namely proposed hydropower plants in Tajikistan and Kyrgyzstan -- are the gravest security threats facing Uzbekistan, comparable to a nuclear bomb. And the solution is that Uzbekistan should join NATO.

The piece is a bit out there, but Uzbek analysts point out that it must have been officially sanctioned. “This site [12news.uz] is not just semi-official, it’s official,” dissident political analyst Tashpulat Yuldashev told uznews.net. "It's curated by Dilshod Nurullaev, former Security Commission chairman and advisor to the President," he said. "There is total censorship in Uzbekistan, and such a politically charged article would not have been allowed to be published without permission from the very top." That assertion was backed up by another Uzbek analyst to The Bug Pit.

Russian readers with a lot of time to waste are encouraged to read the entire 9,000 words (and uznews.net summarizes it in English), but here's a flavor:

Contemporary Uzbekistan, as a legal successor to the Kokand khanate, has the full right to territorial claims on the entire republic of Kyrgyzstan, not to mention the property claims of all the transboundary waters and the structures built on them, including [hydroelectric dam project] Kamburata-1... In the case that Russia or Kyrgyzstan further act arbitrarily after the government of Uzbekistan presents a note, addressed to Russia and Kyrgyzstan, demanding the immediate cessation of construction of Kambarata-1, the Uzbek side will have the full and justified right to take that object under its control, take it under its jurisdiction with all of the military-political and economic ramifications.

The explanation of how NATO will help all of this is pretty thin, unfortunately.

The threats to the national security of Uzbekistan, including the threats connected with the surplus of labor resources and the limitations of labor migrants to Russia and Kazakhstan, dictates the harsh conditions according to which Uzbekistan must join NATO. It's necessary to become the avantguard (outpost) of this organization in Central Asia, having a contemporary army, in which could be mobilized that part of our youth, labor migrants in Russia and Kazakhstan... "

As unlikely as NATO membership for Uzbekistan sounds (and is), Karimov has in the past made clear his interest. When the U.S. was first discussing military cooperation with Uzbekistan in the wake of the September 11, 2001, attacks, President Islam Karimov's "first requests were for immediate membership in NATO and a bilateral mutual defense treaty with the United States," wrote (pdf) U.S. Air Force Colonel Michael McCarthy, who worked on Central Asia security cooperation issues at the time. But it goes without saying that making the case for NATO accession by making territorial claims against most of your neighbors is unlikely to win much favor in Brussels.

If this was in fact officially sanctioned by Karimov, it's hard to know what the purpose is, as it seems designed to offend and alarm pretty much every neighbor Uzbekistan has, not least Russia, while convincing potential partners that it would be an extremely troublesome ally.