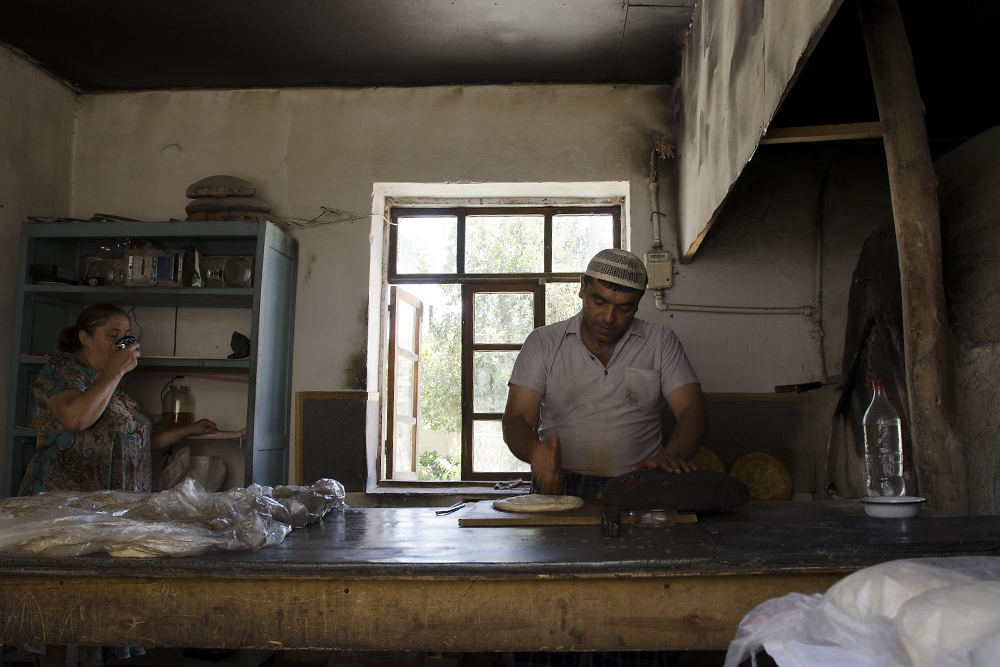 Judging by the long line outside the Russian Embassy in Tashkent one recent afternoon, new Russian legislation offering citizenship to Russian-speakers is prompting lots of individuals in Uzbekistan to ponder emigration. Some see a chance to escape economic woes; others, stymied by Uzbekistan’s own Byzantine bureaucracy, want to seize on an opportunity to obtain a proper passport.

Following Moscow’s March annexation of Crimea, Russian President Vladimir Putin offered citizenship basically to anyone hailing from the former Soviet Union, so long as they speak fluent Russian and renounce their current citizenship.

For migrant workers from Uzbekistan, Russian citizenship offers a solution to the status quo. Uzbekistan sends millions of migrants to Russia annually, who often work with semi-legal status. According to Russia’s Federal Migration Service, there were 2.3 million Uzbek migrants in Russia as of March. (The real number is thought to be higher). A Russian passport can ease problems with police and employers.

Tashkent does not offer legal or other support to its citizens working in Russia. And though migrants’ remittances make up a sizable portion of the Uzbek economy – at least 16 percent according to Russian Central Bank data – Uzbek officials actively denigrate them. Last year President Islam Karimov branded migrant workers "lazy" people who "disgrace" all Uzbeks. In May, Uzbekistan-based websites cited Uzbek consulates abroad as stating citizens permanently residing in foreign countries without consular registration could have their citizenship revoked.

The fact that Russia retains a generally positive image among Uzbek citizens is helping to spur interest in the citizenship program. Many in Uzbekistan still watch Russian state television and are influenced by Kremlin propaganda.

A visit to the Russian consulate off Nukus Street in Tashkent one scorching afternoon recently vividly demonstrated just who is interested in Russian citizenship. Apart from a few Russian citizens trying to resolve consular issues, most people queuing in an alley outside the consular section were Uzbek citizens of various ethnic backgrounds, or stateless persons, many of them of Uzbek ethnicity. "I want to get Russian citizenship to make it easier to work in Russia and live in Uzbekistan," an ethnic Uzbek who moved from Tajikistan to Uzbekistan's southern Kashkadarya Region in the early 2000s told EurasiaNet.org. Since his arrival in Uzbekistan, he's been living as a stateless person, making it difficult even to leave Uzbekistan, let alone obtain a Russian visa. (Russian visas are required for stateless persons, but not Uzbek citizens).

Indeed, many people in line were stateless people from other former Soviet republics who have been trying for years, and failing, to obtain Uzbek citizenship. Uzbekistan does not publish data on how many people it grants citizenship each year, but the number is thought to be in the single digits.

An ethnic Korean woman said she and her Tajik partner, who holds an Uzbek stateless person's document, were queuing to obtain Russian citizenship to make it "easy" for him to live with her in Kazakhstan. She moved to Kazakhstan last year and intends to obtain a residence permit there. Living in Kazakhstan as a Russian citizen, in her opinion, is the best option for her partner.

Uzbekistan does not publish reliable figures on the country’s ethnic breakdown and has not conducted a census since 1989. According to figures published in the Ethnic Atlas of Uzbekistan in 2002, Uzbekistan was home to about 2 million members of ethnic minority groups in 2000, including 1.2 million ethnic Russians and sizeable numbers of Ukrainians, Koreans, Armenians, Tatars and others. Many minorities are primarily Russian-speakers, and, thus, are prime candidates to apply for Russian citizenship.

One requirement that should be simple for many Uzbeks to prove – fluency in the Russian language – is difficult to demonstrate in Uzbekistan. Uzbekistan does not have an authorized center for language testing, thereby requiring Uzbek residents to travel to neighboring countries in order to take the 3.5-hour-long language exam. In the line outside the Russian Embassy, an ethnic Armenian who is an Uzbek citizen and received an engineering degree in Russia four years ago said he hopes to use his diploma to obtain Russian citizenship and eventually find a job in Russia.

The Kremlin may have devised the new scheme to help boost its population after a state program on voluntary settlement of ethnic Russians abroad failed to attract immigrants from the former Soviet Union. That program has managed to attract fewer than 150,000 people since its inception in 2007, according to the Russian Federal Migration Service, despite state support offered to qualified migrants. The Russian government had hoped for 700,000 by 2012, according to the Kommersant daily.

The new legislation may prove more successful in attracting skilled immigrants, as the queues outside the Russian Embassy seem to testify: In June the Embassy was accepting appointments for no earlier than October.