Political figures with potentially critical views have been locked out of the process. 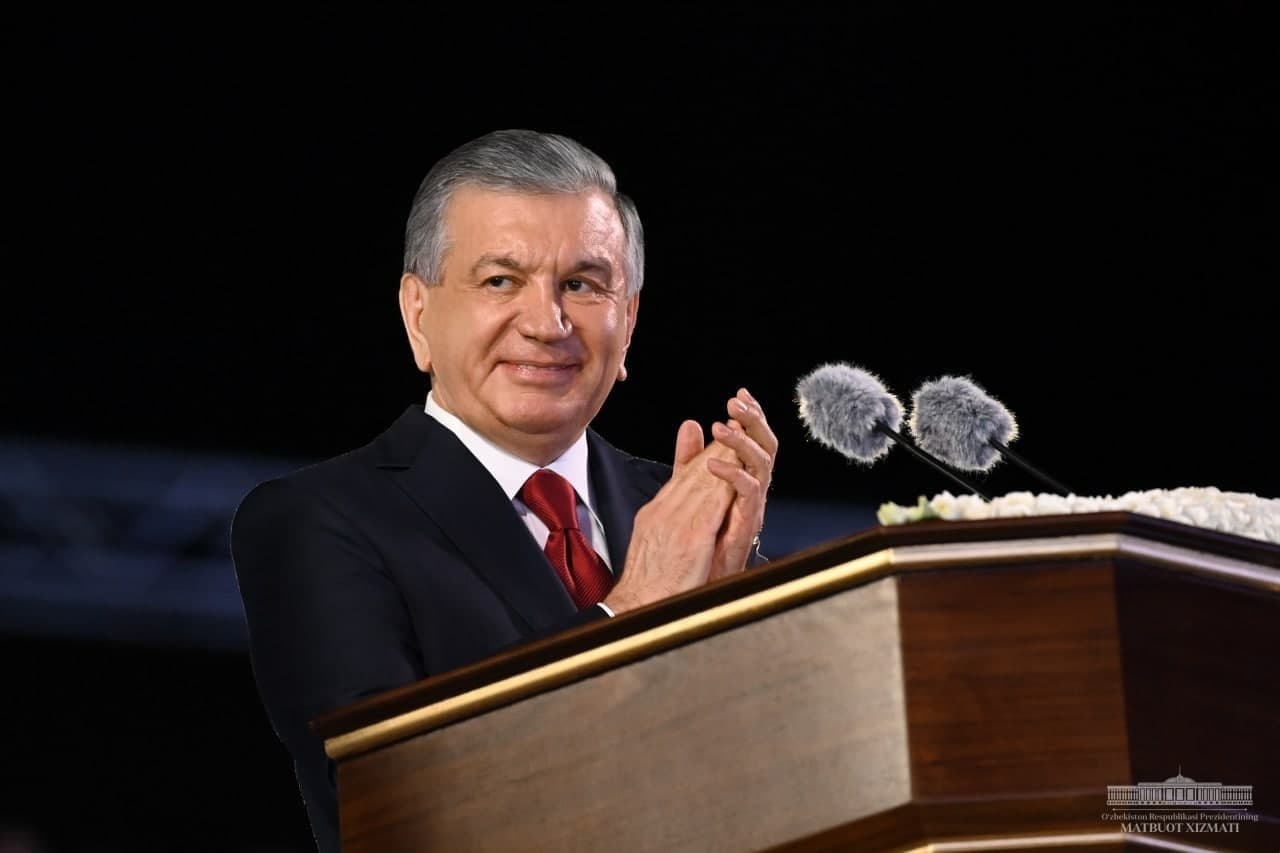 Hooray for me: Mirziyoyev seen at a public event on August 31. (Photo: Presidential administration)

Uzbekistan’s largest political party has approved the nomination of President Shavkat Mirziyoyev as its candidate for the October 24 presidential election – a formality since no serious opponents will be in the running.

The Liberal Democratic Party, or UzLiDeP, approved the candidacy at an extraordinary plenum of its central council on September 9.

“The delegates at the congress unanimously supported the proposal … to nominate Shavkat Mirziyoyev as a presidential candidate,” an UzLiDeP spokesman said.

Mirziyoyev won the election with 90 percent of the vote in 2016 and is likely to romp to a similarly comfortable victory on this occasion, despite the economic hardships caused by COVID-19.

The sluggishness of the whole process is indicative of how seriously the competition is being taken. Campaigning was formally permitted to begin on July 23, but UzLiDeP only got around to putting Mirziyoyev forward this week.

Some rival contenders are at least somewhat more distinctive this time around. Milliy Tiklanish, which controls the second-largest bloc in parliament, on August 26 approved its leader, Alisher Kadyrov, as its candidate. Kadyrov has over the past few years sought to burnish his ultraconservative credentials in various ways, including by stating in a June interview that he would favor depriving gays, lesbians and transgender people of citizenship and deporting them.

The People’s Democratic Party on September 6 selected Maksuda Vorisova, the deputy chairperson of its central council, as its candidate. The last woman to run for president in Uzbekistan was Diloram Tashmukhamedova, who got 3 percent of the vote in a 2007 election won by the late Islam Karimov.

Adolat and the Ecological Party will be represented by Bakhrom Abdukhalimov and Narzullo Oblomuradov, respectively.

Other hopefuls have seen their attempts to participate arbitrarily dashed.

In January, the well-known singer Jahongir Otajonov announced on Instagram that he aspired to one day lead the country, sparking speculation that he might try to stand in the elections.

Four months later, the unregistered Erk party announced it was backing Otajonov as its candidate. On May 26, the day that Otajonov was meeting at his home with Erk representatives to approve his candidacy, the premises were mobbed by an aggressive group of around 20 screaming men and women.

“I believe that such attacks cannot be carried out without permission from above,” Erk party activist Bakhtiyor Isabekov told Ozodlik at the time.

In July, Otajonov announced that he was retiring from political activity altogether to abide by the wishes of his mother, who he said had been troubled by his live online video commentaries.

“After each broadcast, my mother’s life was shortened by five years. The tears of my parents are costing me dearly,” he said on Instagram. “I apologize to the public. I am now quitting politics.”

Since Erk is not registered as a political party, any notion of Otajonov’s candidacy would have been doomed from the outset anyhow. The same was the case for the Truth and Progress party, which was informed in June that it had failed to meet all the requirements for registration.

Truth and Progress ("Hakikat va Tarakkiyot" in Uzbek) was set up by former university lecturer Khidirnazar Allakulov and has been trying to rally support amid sustained harassment from the authorities.

Mirziyoyev’s rival candidates will, as usual, refrain from criticizing him – campaigning in Uzbek politics is always wholly non-confrontational and primarily consists of endorsing government policy and rehearsing platform points. But there is an additional reason now for public figures to avoid being perceived as showing him disrespect.

Under a change to the law approved by Mirziyoyev in March, it became a criminal offense to insult the head of state. Under that reform, the crime is punishable by up to five years in prison. Prosecution is envisioned for people committing the offense through the internet or other forms of telecommunication.

The legislation was adopted two weeks after RFE/RL’s Uzbek service published a detailed report alleging that state-owned companies had built, at the taxpayers’ expense, a vast luxury resort for Mirziyoyev’s own use along the Shovvozsoy river in the mountains south of the capital, Tashkent. The broadcaster’s sources estimated that constructing the whole complex might have cost anywhere up to several hundred million dollars.

At least one low-profile social media personality is known to have fallen foul of the legislation already.