Uzbekistan: Mirziyoyev romps to victory, but with reduced vote share

Tashkent sought to promote the election as more democratic than in the past, despite the absence of opposition. 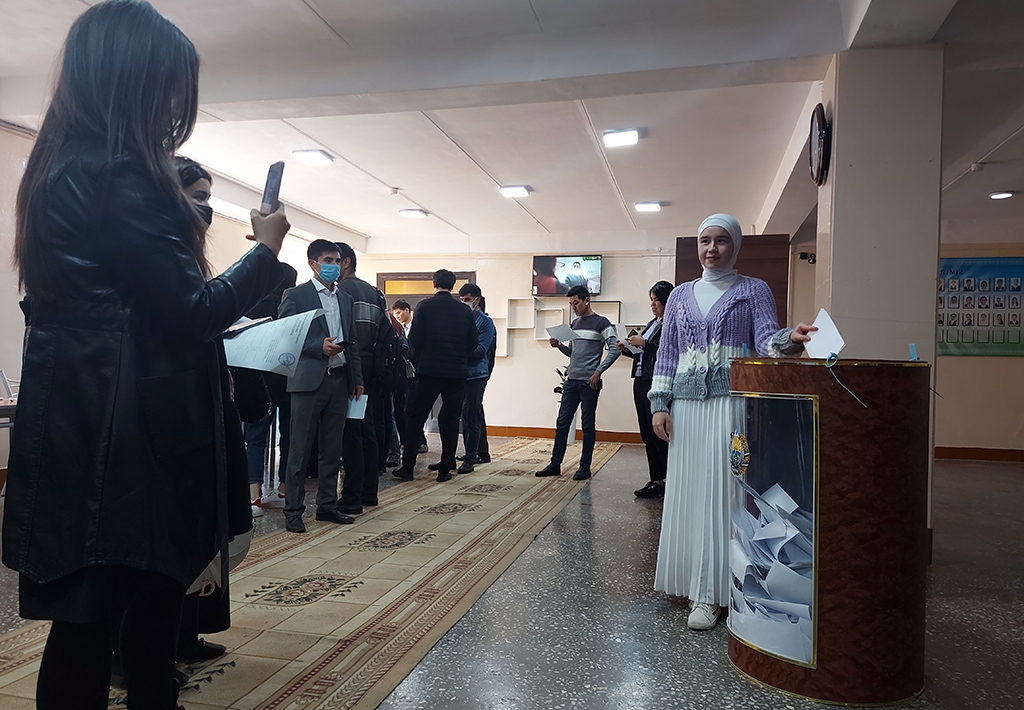 A voter in Tashkent has her picture taken at the ballot box. (Joanna Lillis)

As expected, Shavkat Mirziyoyev cruised to a landslide victory in Uzbekistan’s presidential election on October 24.

However, he saw his share of the vote slip from the 89 percent he received in 2016 to a more respectable looking 80.1 percent, as Tashkent sought to promote the election as more democratic than previous ones despite the absence of opposition.

Mirziyoyev’s nearest rival, Maqsuda Vorisova, the only woman in the race, received 6.6 percent, according to the Central Election Commission.

Nationalist Alisher Qodirov, who had appeared to be the best-known of Mirziyoyev’s rivals among voters, scored just 5.5 percent. The Ecological Party’s candidate, Narzullo Oblomurodov, came fourth, with 4.1 percent. In last place, at 3.4 percent, was Bahrom Abduhalimov of the Adolat (Justice) party.

Mirziyoyev’s lower vote share, in what was a carefully stage-managed vote, was all part of the authorities’ attempt to paint a picture of blossoming political pluralism in Uzbekistan, despite the fact that the incumbent’s rivals were stalking horses nominated by their state-sanctioned parties.

They were present merely to make up the numbers and lend a democratic veneer to an essentially undemocratic vote, from which genuine opposition candidates were barred.

Kristian Lasslett, professor of criminology at Ulster University and co-director of UzInvestigations, which researches corporate and government power in Uzbekistan, sees this reduction in the president’s vote share as a choreographed concession to plurality that will allow foreign supporters to point to positive changes to justify engagement with the regime.

“This ensures that if anyone raises questions about international complicity in an unsavory regime, complicit actors can point to a positive program of general change,” Lasslett told Eurasianet. These actors can be “confident few out there asking the question would be armed with the highly specialized knowledge to critique that questionable … position."

International election observers held up some of the reforms enacted during Mirziyoyev’s five years in power as positive, but flagged the absence of opposition as problematic and pointed to a large number of violations on election day.

“The recent and ongoing reforms are an encouraging sign,” said Heidi Hautala, the head of the European Parliament’s monitoring delegation.

“But the exclusion of opposition parties and the lack of genuine competition, as well as the high number of irregularities we saw on election day, remain substantial obstacles in the path of the democratization process.”

These violations included swathes of voters added to the lists without proper controls; people voting without presenting the required identification documents; people voting on behalf of others; and “indications of ballot box stuffing in multiple polling stations,” according to the findings of the joint observation mission from the OSCE Office for Democratic Institutions and Human Rights, the OSCE Parliamentary Assembly, and the European Parliament.

In the run-up to the election, opposition figures reported increased harassment and intimidation.

Last week, Jahongir Otajonov, a singer turned presidential wannabe, was prevented from flying to Turkey. He told RFE/RL’s Uzbek Service that he was barred from boarding his flight because of alleged child support arrears.

In January Otajonov announced his intention to run for president on the unregistered Erk party’s ticket, but withdrew his bid after his family came under pressure.

The government also rejected a bid by Khidirnazar Allakulov, a maverick anti-corruption whistleblower, to register an opposition party as a springboard to run in the election.

Journalist and bloggers came under attack during the election campaign. A week before the poll, the RFE/RL Uzbek Service’s Telegram channel was flooded with threats of beheadings and sexual assault against its journalists.

International election observers urged the government to continue pursuing democratization efforts as Mirziyoyev enters his second term, which according to the constitution should be his last.

“This election has shown that the democratic reforms of recent years must be carried forward to confirm what has already been achieved,” said Reinhold Lopatka, the leader of the short-term OSCE observer mission.

“Full respect for basic freedoms and real competition among political forces, which were lacking here, will be essential to live up to the people’s democratic aspirations.”