Uzbekistan: More journalists in the dock

Effect.uz has dabbled in unethical practices, but it's not what got them into trouble. 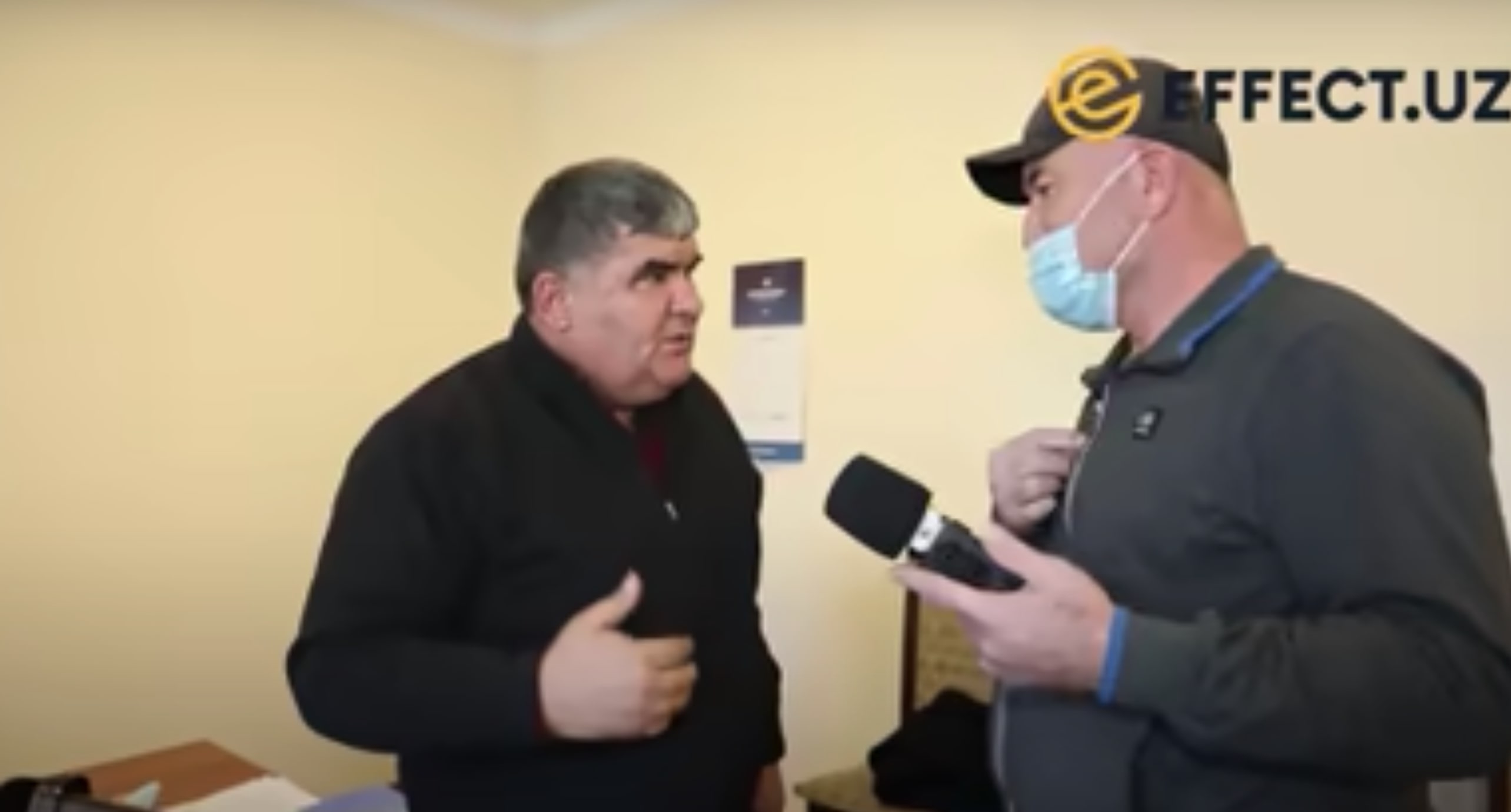 The chairman of Termez district court being confronted by an Effect.uz reporter.

Yet more journalists are in the dock in Uzbekistan.

This time, it is correspondents from the news website Effect.uz who are facing criminal charges, of allegedly impeding a government representative from doing their work, interfering in an ongoing investigation and court procedures, libel, and insulting a public official.

The first hearing took place on May 27 in the city of Qarshi, capital of the Qashqadaryo region. The Supreme Court identified the three defendants as H. Akhmedov, A. Nurimbetov and E. Tadjibayev. The opening hearing lasted only 30 minutes as the journalists were asked by the judge if they were familiar with the indictment against them – they said they weren’t. The judge has postponed proceedings to May 31.

The case stems from an incident that occurred in January.

“Effect.uz posted a video showing (journalists) bursting into the office of the chairman of Termez district court and demanding that he give access to film a trial,” the Prosecutor General's Office said in a statement.

The video, which shows the havoc that ensued during this episode, has racked up more than 700,000 views on YouTube.

The trial that the Effect.uz journalists had been trying to cover involved accusations of large-scale fraud against a local resident named Ikrom Hudoyarov. The website’s reporters had committed to covering the trial at the request of the accused, but hearings were due to be held behind closed doors.

It has been alleged in the past that Effect.uz sometimes accepts payment from the subjects of their reporting – an ethically problematic approach that is known to be commonplace in Uzbekistan’s fast-evolving media scene. The website is one of many to be created amid the boom of new outlets that appeared in the wake of President Shavkat Mirizyoyev coming to power in 2016.

Since being registered in 2019, Effect.uz has devoted much attention to trials that have gained considerable public interest and yet limited formal journalistic coverage. One notable example was the case of citizen journalist Otabek Sattoriy, who was sentenced to six-and-a-half years in prison in May.

Sattoriy’s case is one of several to feed anxieties that the relative liberalization of the early Mirizyoyev era may be coming to a close.

Another episode that has troubled international advocacy groups involves the social media commentator and provocateur Miraziz Bazarov, who was targeted for violent assault in March over his pro-LGBT views. Instead of seeking to investigate and prosecute Bazarov’s attackers, the authorities have instead pursued several lines of investigation against the citizen journalist himself.