Uzbekistan moves to lower cost of cotton for manufacturers

The plan is to eventually phase out exporting raw cotton altogether. 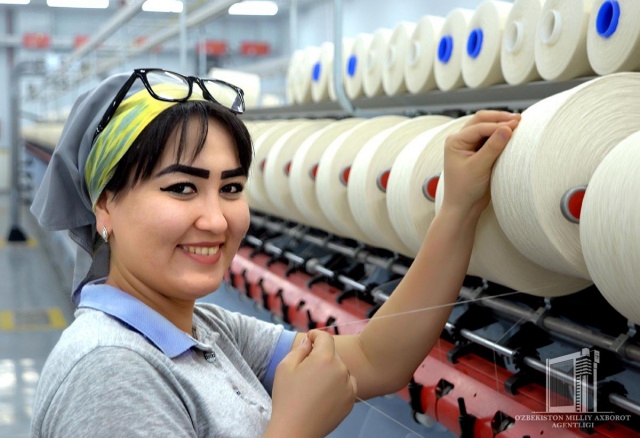 Following the thread: The goal is to transition entirely toward value-added ready products for export instead of raw cotton. (Photo: Uza.uz)

Cotton grown in Uzbekistan is to be sold at a rate pegged to prices on the New York Mercantile Exchange following a May 6 presidential decree in support of the textile industry.

The move toward a market-based price mechanism is expected to reduce the cost of raw cotton for textile companies by around one-tenth.

This effort is in line with a broader Uzbek government strategy of moving toward the production of more valuable exports, like fabrics and clothes, instead of simple raw cotton. According to official figures, there are more than 2,000 companies in Uzbekistan working in textiles, providing jobs for at least 365,000 people.

The value of textile exports in 2019 reached $1.9 billion, but that is nothing as compared to the ambition of gradually getting that figure to $15 billion.

President Shavkat Mirziyoyev said at a government meeting in April that he wants to see output of ready textile products increased four or fivefold in the coming five years. It was stated at that same meeting that $300 million in credits were being allocated through the government Reconstruction and Development Fund for textile enterprises in the Namangan, Samarkand and Tashkent regions for that purpose.

Amid other measures intended to ease cashflow for textile manufacturers, this week’s decree has lengthened payment deadlines for raw cotton from 90 days to 150 days. The government has also committed to simplifying the process whereby producers get value-added tax rebates once they ship their goods out of the country.

As more raw material is parlayed toward domestic yarn production, the expectation is that raw cotton exports will accordingly be dropping to a minimal level over the coming year. The ambition is to dispense with raw exports altogether in the short term.

According to an April digest of Uzbekistan’s cotton industry produced by the USDA Foreign Agricultural Service, Russia remains the most active buyer of Uzbek product, having imported 73 million square meters of cotton fabric in the first six months of marketing year 2019-20. Kazakhstan bought 10.3 million square meters in the same window of time. For the 28 EU members (now 27, following Britain’s withdrawal), the collective volume of imports was 17.74 million square meters.

The last few months have seen some dramatic readjustments to a cotton industry that had long been in desperate need of reform.

In March, Mirziyoyev signed a decree ordering the abolition of the state-order system for cotton crops, in effect ending a decades-old arrangement that encouraged forced labor. As of this year, the quota for the production and sale of cotton has been scrapped, leaving farmers who rent land from the state free to cultivate alternative and more lucrative crops. This was hailed by international advisors as a “historic development."