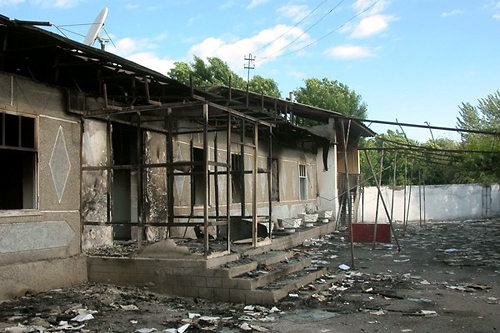 Almost eight years after the unrest in Andijan, Uzbekistan continues to actively pursue extradition requests for its citizens. (Photo: Eurasianet.)

Azamatjon Ermakov used to have a relatively peaceful life ferrying traders and their goods around on his donkey cart in a village in Uzbekistan’s Andijan province. He had embraced Islam in 1995 and became a regular at the local mosque. But his daily routine was broken in 2005 when government troops opened fire on protestors in the provincial capital, killing hundreds.

Ermakov managed to avoid trouble amid the initial crackdown, but four years later, in 2009, Uzbek law-enforcement agencies reportedly sought his arrest for religious extremism – a charge commonly used to silence government critics after the Andijan massacre. He fled to Russia.

That November, Ermakov was detained in Nizhny Novgorod on an Uzbek extradition request. After two years in and out of prison, while the European Court of Human Rights urged Russia not to send him home and Amnesty International warned that he faced, in Uzbekistan, "a real risk of being tortured and otherwise ill-treated," he disappeared from prison, somehow passing through a Moscow airport on November 2, 2012, bound for Uzbekistan, activists later learned from Russian officials.

"There is no evidence to believe that Azamatjon Ermakov would have voluntarily returned to Uzbekistan, as he was aware of the serious and real risk of grave human rights violations he would face on return – in particular incommunicado detention, torture and other ill-treatment and imprisonment in cruel, inhuman and degrading conditions following an unfair trial," Amnesty said in a statement in March.

Ermakov, now 40, is one of dozens of Uzbek citizens accused by Tashkent of religious extremism or terrorism, then kidnapped or otherwise forcibly returned to Uzbekistan from Russia and other post-Soviet states. Activists believe Uzbekistan, under the pretext of fighting terrorism and religious extremism, uses membership in several regional organizations – including the Commonwealth of Independent States (CIS), and the Shanghai Cooperation Organization (SCO) – to go after perceived regime opponents who are living beyond Uzbekistan’s borders.

Democratization activists assert Tashkent exaggerates the threat of terrorism to win international sympathy and to justify its ruthless actions. “The Uzbek government harshly penalizes individuals for independent religious activity, regardless of their religious affiliation. Thousands remain imprisoned as alleged extremists, including many who reportedly are denied due process and tortured,” the US Commission on International Religious Freedom stated earlier in April.

As signatories to various UN human rights treaties, CIS and SCO member states are under obligations to protect the rights of detainees that override bilateral and regional agreements relating to extradition, according to New York-based Human Rights Watch. Moreover, under its commitments to the European Court of Human Rights, Russia cannot extradite a suspect to a country where he/she might face torture.

Abdulvosi Latipov, a Tajik national, had been in and out of Russian courts fighting extradition on terrorism charges for years. In November, according to Amnesty, he was “forcibly taken from a flat he had been staying [in] by unidentified armed men wearing masks” and returned to Tajikistan. It seems he hasn’t been heard from since.

Kazakhstan, like Russia, seems to be taking a lax approach to safeguarding basic rights when considering extraditions. In March, Astana handed over Khayrullo Tursunov, also accused of terrorist activities, to Uzbekistan. In 2009, ignoring international outrage, Astana stripped 28 Uzbeks of their refugee status and deported them en masse.

“Unfortunately, much of the ruling elite across the post-Soviet space has actively resisted implementing and abiding by their obligations under international human rights and refugee law,” Steve Swerdlow, a Central Asia researcher at Human Rights Watch, told EurasiaNet.org in an email interview. “This has led Moscow, Astana, and sometimes Kyiv or Bishkek to actively cooperate with Uzbek security services in the forced return, extradition, or kidnapping of persons to Uzbekistan who face a real risk of torture there.”

On April 8, a spokesperson for Uzbekistan's security service, the SNB, refused to answer questions about cooperation over the telephone; the human rights ombudswoman's office in Tashkent said no one was available to talk to the media about human rights.

Cooperation benefits the Russian security services, too, says Kirill Koroteyev of Memorial. These benefits "outweigh” the political fallout from ignoring decisions issued by the European Court of Human Rights, to which Russia, as a member of the Council of Europe, is obliged to honor. "However, no one knows what these benefits are," he told EurasiaNet.org. "Practically no former Soviet country – neither Russia, nor Ukraine, not even Georgia – is safe for Uzbek refugees."

Koroteyev specifically pointed at the SCO as a mechanism that facilitates intelligence cooperation and extraditions at the expense of human rights.

Swerdlow says the SCO “appears to be reinforcing the violation of the prohibition on return to torture through its own set of regional security agreements.”