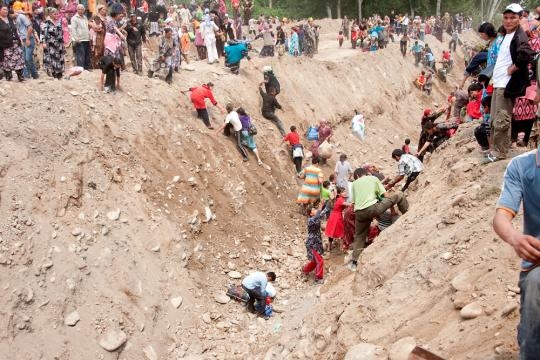 Refugees from Kyrgyzstan scramble in ditches at the Uzbek border.

Uzbekistan has opened the border for refugees as of the night of June 13 and officials say they will keep it open, the Russian state news agency RIA Novosti reports. Before the border opened, thousands of refugees were scrambling in panic, climbing into and out of pits earlier dug along the border by Uzbekistan, but now they are being assisted by Uzbek authorities, says RIA Novosti.

The death toll in the Kyrgyz-Uzbek ethnic conflict in southern Kyrgyzstan, now in its fourth day, has reached 113, with 1,292 wounded (742 hospitalized and 550 treated) in both Osh and Jalal-Abad regions, AKIpress.org reports. In Osh, 1149 have been brought to emergency care (654 hospitalized, 403 treated and 92 died). In Jalal-Abad, 256 have been brought to medical facilities (88 hospitalized, 147 treated, and 21 have died).

Five policemen have been killed and 11 wounded, according to initial reports.

EurasiaNet's correspondent reported today that direct violence in Osh appears to have subsidized but some Uzbek families are still barricading themselves in as fires rage and looters continue to steal property. Several Uzbeks remained who said they were in shock, tired and hungry.

But many Uzbeks seem to be fleeing Osh, and according to the Associated Press, citing the Uzbek government, at least 75,000 refugees have fled into Uzbekistan.

Uzbek NGOs are reporting even more refugees than Uzbek officials. EurasiaNet spoke to Abdusalom Ergashev, coordinator of the Rapid Response Group, an Uzbek NGO based in the Ferghana Valley:

At the moment the most difficult situation at the border is at Bazar-Korgon district of Jalal-abad. At the moment more than 20,000 people, who are mainly women, elderly and children are waiting at the border, but Kyrgyz law enforcement agencies are making it difficult for them to reach the border.

There are a lot of Uzbek houses burned down in Bazar-Korgon, militia and special forces have shot some Uzbek boys as well. Uzbekistan has formed refugee camps for Uzbeks. Camps are situated in the schools of Uzbekistan. Refugees are only ethnic Uzbeks, and they are only people who have been living in Kyrgyzstan a long time.

I’ve been talking to ethnic Uzbek people in Ferghana and from the information I have [reports] that about 200,000-300,000 refugees are already hosted in the refugee camps of Uzbekistan and they are mainly women, elderly and children. All of the schools of the villages near the border are packed with ethnic Uzbek refugees. At the moment, Uzbekistan closed the border check points for regular passes. All the border check points are only open for refugee passes only.

As the pattern in recent years has been for Uzbeks to flee government persecution in Uzbekistan since the 2005 Andijan massacre of demonstrators, it is surprising that as many as 75,000 or more are willing now to leave Kyrgyzstan and go to Uzbekistan, but as Ergashev has noted, they appear to be people who have lived in Kyrgyzstan for a long time and may not believe they face detention -- or have taken that lesser risk by contrast with being killed by mobs in Kyrgyzstan.

The Russian media is reporting atrocities committed by Kyrgyz gangs, citing a representative of the Uzbekistan Emergencies Ministry. RIA Novosti, the Russian state news agency, has filed this report from Tashkent this evening:

According to an [Uzbek] Emergencies Ministry official, refugees crossing the border are describing the brutalities committed by bandits. "There are reliable facts that mobs of armed youth are destroying homes, raping women, and beating residents. In particular, a woman carried in her arms an 8-year-old girl whose arm had been chopped off by militants. And before that, her grandmother and brothers were brutally murdered before her eyes," a source told the agency.

Some Kyrgyz NGOs have called on Russian President Medvedev to send troops. In a petition distributed today by e-mail, the Expert Working Group of Uzbekistan, a group of Uzbek human rights NGOs, has called for outside military intervention in Kyrgyzstan from their own Uzbek government as well as NATO to stop the violence. They have also called on the UN to intervene, making the argument that due to the large number of civilians killed and refugees coming from Kyrgyzstan into Uzbekistan, the situation has reached the threshold of a "threat to international peace and security" under Chapter 7 of the UN Charter, and the Kyrgyz interrim government has proved unable to cope:

Today what is taking place in Osh and Jalal-Abad regions of Kyrgyzstan requires immediate military intervention because the law enforcement bodies and the Armed Forces of the Republic of Kyrgyzstan have not only recognized that they are paralyzed by the situation, but also some of their representatives have taken part in some parts of the ethnic cleansing.

We call on the United Nations Organization to pass a decision on sending peacekeeping forces to the conflict area. We also call on the Government of the Republic of Uzbekistan and the Northern Alliance Treaty Organization to take all possible measures, including military means, in order to stop those illegal paramilitary groups which have exterminated the civilian population.

The Uzbek group noted the role of the territorial enclaves criss-crossing Uzbekistan, Kyrgyzstan and Tajikistan in the region as fueling the propensity for conflicts among the peoples and governments of these states and called on the elders of the mahalla, or local communities to attempt to bring calm to their districts.

The Kyrgyz interrim government has been organizing citizens, labor migrants in Almaty, and sports associations to make humanitarian deliveries to Osh and Jalal-Abad. The Kyrgyz Youth Ministry has sent 60 tons of food to Osh.

Russian President Dmitry Medvedev has held a telephone conversation with Roza Otunbayeva, head of the interrim government of Kyrgyzstan, urging an immediate end to the inter-ethnic conflict, Russian media reported. He said an additional contingent from the Defense Ministry of Russia has been sent to Kyrgyzstan to protect the families of Russian military personnel serving in Kyrgyzstan. A meeting of the Russian-led Collective Security Treaty Organization will be held on Monday to discuss the crisis.