The academy seems to be more evidence of a growing embrace of religious values. 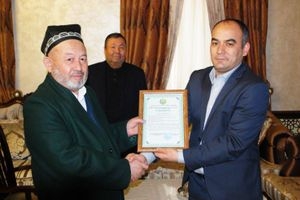 The first specialized academy of higher learning in Uzbekistan devoted exclusively to Islamic studies has been registered by the Justice Ministry in seemingly more evidence of a growing embrace of religious values.

The government’s religious affairs committee reported on its website on January 17 that the Justice Ministry officials formally handed credentials to the chairman of the state-sanctioned Spiritual Directorate of Muslims of Uzbekistan, grand mufti Usmankhan Alimov, and the rector of what is to be dubbed the Islamic Academy, Nematulla Ibragimov.

President Shavkat Mirziyoyev in mid-December signed off on the legislation required for the creation of the academy, which is being founded under the auspices of the Spiritual Directorate of Muslims of Uzbekistan.

Ibragimov’s background is Arabic studies. He has formerly worked at the Tashkent State Institute of Oriental Studies.

The Islamic Academy will offer two-year undergraduate degrees and three-year doctoral courses. Uzbek citizens and foreigners alike can apply. The main disciplines will be Koranic studies, Islamic law, study of the hadiths — the words and actions of the Prophet Muhammed — and the interpretation of Islamic texts.

The academy has already enrolled 16 undergraduates for its 2018-2019 academic year.

Ravshan Nazarov, a historian, said he believes that Uzbekistan is sorely lacking in well-trained theologians and that the Islamic Academy would provide a timely remedy.

The fulsome praise coming the religious affairs committee, which has described the academy as a “great gift for believers in our country,” suggests that instruction will be hewing very closely to the state-mandated orthodoxy, however.

Yakub Bukharbayev, an imam and a teacher at the Islamic Institute in Tashkent, one of two institutions in Uzbekistan authorized to trains clerics, said that the country’s archives contain tens of thousands of Islamic manuscripts that need to be studied. Graduates of the Islamic Academy can be enlisted into pursuing that goal, he said.

“Before in Uzbekistan we didn’t even offer scientific degrees in Islamic studies. We have a native of Bukhara, [9th century Islamic scholar] Imam al-Bukhari, who is the author of hadiths. And we have have the works of another great fellow countryman, a scholar of the hadiths and Islamic jurist, Imam at-Termezi, who has also not been sufficiently studied,” Bukharbayev said.

Islamic education is, after many years of neglect under the late President Islam Karimov, who regarded devout Muslims with intense suspicion, beginning to earn more attention from the Uzbek authorities.

In May, the country’s oldest madrassa, the 16th century Mir-i Arab in Bukhara, was upgraded to a higher education institution — from a college for upper secondary education — becoming the second establishment of its type in Uzbekistan, along with the Islamic Institute in Tashkent

Mir-i Arab was the only madrassa allowed to operate in Soviet times and turned out many students who would go on to become major figures in their own regions. They included the chairman of the Council of muftis of Russia, Ravil Gainutdin, the Grand Mufti of the Caucasus, Allahshukur Pashazadeh, and even the former head of the Chechen Republic, Ahmad Kadyrov,  father of the current incumbent, Ramzan Kadyrov.

In addition to the two institutions of Islamic higher learning, Uzbekistan has nine Islamic high schools, which caters to students in their late teens.

There is also the Tashkent Islamic University, which was founded in 1999 as the first specifically Islamic university in Central Asia. That university is not exclusively focused on religious studies, however, and provides courses on secular subjects, including natural sciences and economics.

Despite Uzbekistan’s gradual softening of restrictions on religious freedoms, the US State Department earlier this month announced it had included the country in an annually updated list of governments that “[engage in or tolerate] systematic, ongoing, and egregious violations of religious freedom.” Other countries re-designated as “Countries of Particular Concern” included Burma, China, Eritrea, Iran, North Korea, Sudan, Saudi Arabia, Tajikistan and Turkmenistan.

Spiritual Directorate of Muslims of Uzbekistan protested the decision, calling it a “mistake.”

“Representatives of various religious confessions in the country recognize the positive ongoing changes in people’s lives, especially in the sphere of religion and religions freedoms. Taking this into consideration, we deem it prejudicial to include Uzbekistan in the list of “Countries of Particular Concern” and believe this is based on outdated views,” the body said in a statement.