Economic relations are what matter in Tashkent. 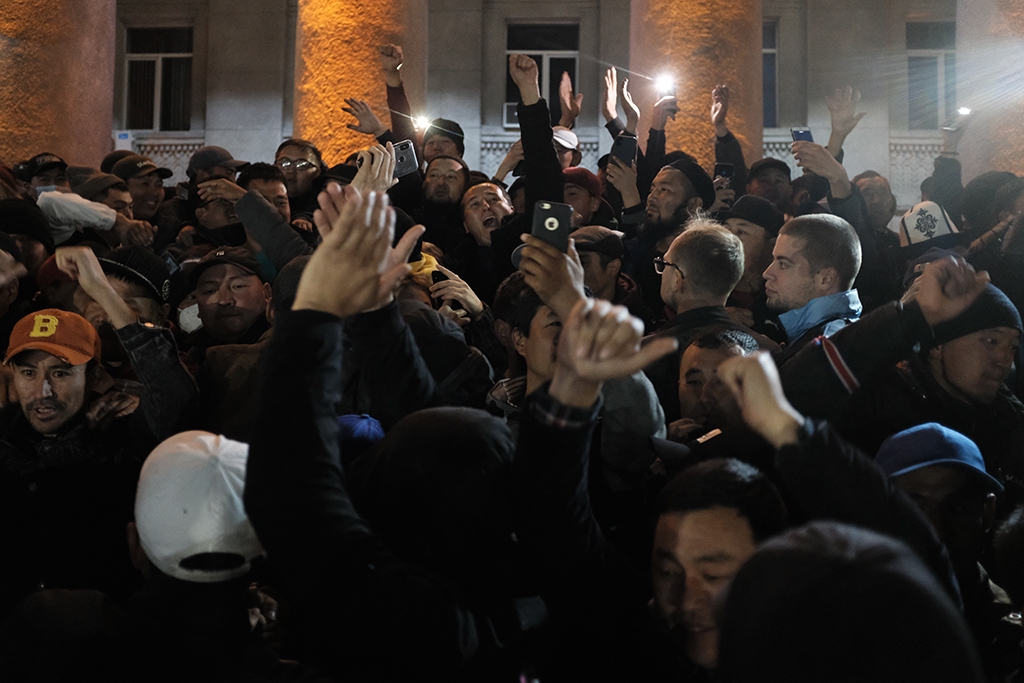 Not a picture Tashkent likes to see (photo: Danil Usmanov)

Uzbekistan is no fan of revolutions in its neighborhood.

The late Uzbek leader Islam Karimov worried aloud to his Russian counterpart during a visit to Moscow less than two weeks after Bakiyev’s ouster that the mayhem in Kyrgyzstan “absolutely did not serve the interests of bordering republics.” Karimov always evinced disdain for rulers who could not keep their populations in check by all means necessary.

This time around, Tashkent was surprised, though notably less alarmed. On October 9, Uzbekistan joined three other Central Asian nations in calling for peace and stability in Kyrgyzstan.

But on October 15, one day after Sadyr Japarov managed to wrangle Kyrgyz lawmakers into making him prime minister, he received a congratulatory note from his Uzbek opposite party, Abdulla Aripov.

This swift expression of intent to work with whomever is in charge is a vivid testimony to the utterly pragmatic good neighbor policy prioritized by Uzbek President Shavkat Mirziyoyev.

Economic relations are what matter. In 2016, the year of Karimov’s death, Kyrgyz-Uzbek bilateral trade turnover stood at $50 million. By 2019, this had risen to $818 million. And Uzbekistan is intent on seeing that pattern persist, notwithstanding the deep disruption caused by the ongoing COVID-19 emergency.

Although there are still occasional flareups among border communities, important strides have been made toward resolving knotty territorial issues. Dialogue has lately been more about building new connections and transportation routes. Uzbekistan has even timidly mooted maybe helping out upstream Kyrgyzstan with building hydroelectric plants – an absolute no-no in Karimov’s day.

As Nigora Hidoyatova, a historian, told Eurasianet, the evolving nature of challenges in the region means that cooperation rather than mutual hostility is becoming progressively more imperative.

“Already in the near future, the countries of Central Asia are going to have start addressing the problem of water shortages,” Hidoyatova said.

One creeping concern on people’s mind, however, is what the change of leadership in Kyrgyzstan could mean for that country’s embattled minority ethnic Uzbek community.

The upheaval of April 2010 was succeeded by even bloodier events in June that year, when hundreds of Uzbeks in the southern Kyrgyz city of Osh were murdered in a whirlwind of ethnic violence. The mayor of Osh at the time, Melisbek Myrzakmatov, displayed no evident sadness over what had happened. Alluding to spurious claims that the ethnic Uzbek community wished to secede and bind breakaway territory to Uzbekistan, he later spoke instead of how “the Uzbeks attacked the sovereignty of the Kyrgyz Republic, but we rebuffed them.”

Myrzakmatov fled Kyrgyzstan after his dismissal in late 2013, thereby evading a seven-year prison sentence in absentia on charges of abuse of office. But in the chaos that erupted this month, the ex-mayor flew back to Osh to a hero’s welcome from hundreds of his supporters.

His return has sent a ripple of anxiety through the Uzbek community, although there is quiet confidence there can be no repeat of the scenes of 2010.

“I think that the Uzbeks and Kyrgyz alike understand very well that Osh cannot survive another bout of ethnic conflict,” Ibrokhim Yangiboyev, a resident of Osh who was 34 in 2010, told Eurasianet.

Yangiboyev, who runs a small printing business, said his aspiration is to live peaceably in his native land of Kyrgyzstan. He admitted that the troublemaking of provocateurs could not be ruled out, though.

“Personally, I am worried by two things: The confrontation between north and south [Kyrgyzstan] and that we don’t again see provocateurs who try to vent out their misfortunes onto the Uzbek minority.”

The relevance of all this to Uzbekistan is how the government there would react in the face of any unrest.

Karimov was largely indifferent to the plight of his co-ethnics in June 2010 and is said to have resisted calls from hawkish military officers to intervene and stop the bloodshed. Any such intervention could have drawn Russia, a security guarantor for Kyrgyzstan, into the commotion and generated even more uncertainty.

What has changed since then is that public conversations flow slightly more freely in Uzbekistan. Where Karimov would have tolerated no chatter about intervention, it is not implausible things would be different in a nightmare repeat occurrence.

But Ravshan Nazarov, a historian, believes it is wholly unlikely that Mirziyoyev will act any differently from Karimov.

“There is no way he would send in the troops. As for allowing volunteer fighters to go in, there is no way he could do that either. It means we would probably again take in refugees and issue calls for peace,” Nazarov said.

A river of kickbacks

Kyrgyzstan’s troubles have spotlighted another curious avenue of bilateral cooperation – albeit one of a more illicit kind.

On October 7, as rival factions were still jostling for power in Bishkek, a man called Tilek Matraimov, who was the head of Osh region’s Karasuu district, was caught by border guards while trying to ford a river separating Kyrgyzstan from Uzbekistan. The news caught many people’s attention because this was the brother of Rayimbek Matraimov, an elusive former top customs official said to have bought power and influence with money made from his allegedly vast smuggling activities.

The Matraimov story is intimately connected with Uzbekistan, since that is where the goods he is said to have unlawfully allowed to slip into Kyrgyzstan duty-free from China – in exchange for kickbacks, it is presumed – eventually ended up.

According to a key witness for a consortium of investigative journalism outfits, around 600 trucks owned by a cargo company run out of the sprawling Abu Sahiy bazaar in Tashkent were making monthly trips through Kyrgyzstan from China’s Xinjiang region.

In their November 2019 report, the Kyrgyz Service of Radio Free Europe/Radio Liberty, the Organized Crime and Corruption Reporting Project and Bishkek-based website Kloop noted that “the company that runs the [Abu Sahiy] market had, for years, been owned by Timur Tillyaev, a controversial businessman who is married to Lola Karimova, a daughter of late President Islam Karimov.”

Tillyaev has been feeling the heat from the Uzbek side too. In March 2018, state television news channel Uzbekistan24 broadcast a report accusing Abu Sahiy of failing to pay up to $55 million worth of taxes between 2016-17.

Rayimbek Matraimov was arrested in Bishkek earlier this week, but given the easy treatment he is receiving from investigators so far, it does not look like he is going to be made to tie up all these loose ends any time soon.

Dramas around interest groups, powerbrokers and clans probably have little bearing on the broader picture, though.

Pulat Ahunov, a foreign-based political activist, said he sees no grounds for a major change of direction in Uzbek-Kyrgyz ties, immaterial of the changes in personnel.

“Mirziyoyev is a practical man who knows that any problems to do with the economy or the border … can be solved around the negotiating table,” he said.