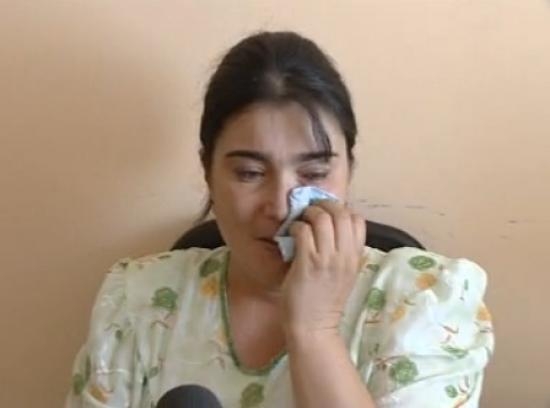 In a secret video made by Uzbek prosecutors and later exposed by investigative journalists at ferghana.ru, a Namangan mother tearfully testifies about the death of her child due to alleged doctor's malpractice.

The Uzbek government has passed a law specifically making it a criminal offense for medical workers and anyone else to infect other persons with HIV due to negligence, the state website gazeta.uz has reported. The law, signed by President Islam Karimov and approved by the Senate on May 7, went into effect May 25, and amends both the criminal and administrative codes regarding responsibility for prevention of HIV infection. While a 1999 law made reference to legal liability for endangering anyone else's life by deliberate infection with the HIV virus, or infection due to medical negligence, a reference to punishment "established by law" was never defined, ferghana.ru reported.

Article. 113 of Uzbekistan's Criminal Code previously provided punishment of fines or arrest from 6 months to 3 years for "deliberately endangering another person by infecting them with a venereal disease or AIDS." The new law specifies criminal liability of arrest for 6 months or imprisonment up to 5 years for such infection "as a result of non-fulfillment or negligence of professional duties". This includes failing to keep instruments sterile, and failure to follow proper procedures for blood transfusions and other medical procedures.

Even before the new law was passed, authorities had brought to trial 13 doctors and medical workers in a case involving infection of 147 children in Namangan and Namangan region, says ferghana.ru. Fourteen of the children later died. Prosecutors found that doctors had failed to sterilize catheters, had reused disposable syringes and needles for taking blood samples, and also had falsified sterilization records and later destroyed evidence. Twelve were sentenced to prison for 5-8 years. Nine other medical employees from district hospitals in Namagan region were investigated, but the government has not made any information available and ferghana.ru could not learn their fate. This year, another group of doctors in Andijan were also charged with infecting patients with HIV.

The appearance of the new law indicates that the government is acknowledging that the HIV virus has been spread by medical malpractice, says ferghana.ru. Yet the government's crackdown may go too far. A reason officials have cited for recently banning private medical practice was that most private physicians were allegedly not following proper procedures for sterilization and disposal of medical waste, ferghana.ru reported.

The government's new harsher measures for spread of the HIV infection may have been prompted by a March 10 exposé by ferghana.ru of a film in the Uzbek language made by Namangan prosecutors about the infected children which they tried to keep secret. The exposure of the 2008 case finally gained some coverage in domestic and international press this year. (The Russian transcript of the film is here).

Last month, President Karimov's daughter Gulnara Karimova, Uzbekistan's ambassador to Spain, a benefactor of a star-studded Cannes AIDs fund-raiser, was targeted by NGOs
who urged her to take up the case of jailed AIDS educator and psychologist,
Maxim Popov, sentenced to 7 years on charges of "corruption of youth" and "mismanagement of funds" for his efforts to distribute sex education books and run programs for at-risk youth. Reporters without Borders and other human rights groups petitioning in Popov's defense said he had been unjustly sentenced. They urged the celebrity fundraiser's organizers, the Foundation for AIDS Research (amfAR), to remove Karimova from their list.

Robert Frost, executive directof of amfAR, said he had raised Popov's case with Karimova had she had promised to "look into the situation," but nothing further has been heard from Karimova. International donors provide Uzbekistan with substantial funds to prevent and treat HIV/AIDS, but have not publicly intervened in Popov's defense and have tended to avoid commentary about the government's law and malpractice suits, focusing instead on personnel training.