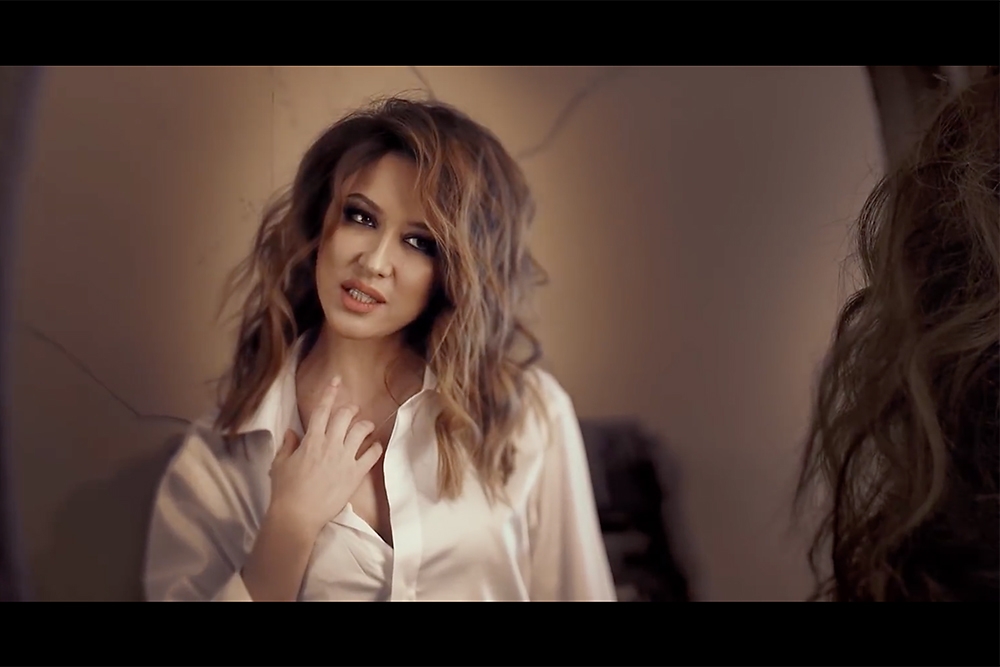 Lola Yuldasheva’s racy 2015 video for her song Konikmadim (“I Haven’t Got Used To It”), which she sings as a duet with Rayhon Ganiyeva, led to her getting stripped of her performing license in Uzbekistan in July 2015. Yuldasheva, who got her performing license back in December, defended herself from criticism by arguing that the song was simply about love and female solidarity. (Video Frame Grab)

Lola Yuldasheva’s image appears in a mirror, her hand running sensuously along down the front of an unbuttoned, silk blouse as she serenades her singing partner, Rayhon Ganiyeva.

“How to understand the behavior of some of our singers who perform on family television and dress however they want, forgetting about the traditional national style? They sing nonsensical songs and make frivolous videos,” deputy Prime Minister Elmira Bositkhonova complained.

The large-circulation newspaper Darakchi published an irate commentary condemning what it suggested were the lesbian overtones of the video.

The episode neatly underlined the tense interaction between pop acts trying to craft a contemporary image in a changing society, and government-backed efforts to inculcate patriotism and conservatism through culture and light entertainment. Most singers remain beholden to the state, however, forcing them to make compromises. But some, like Yuldasheva, seem willing to push boundaries.

Singers in Uzbekistan operate at the pleasure of Uzbeknavo, a state-run arts association that issues performing licenses. Popularity counts for little without a license. The responsibilities of the state body include vetting music videos for content and monitoring the behavior of the artists on its books.

A government decree adopted in December tightened conditions for issuing licenses. The newly introduced provisions established, among other things, a ratings system based on how much an artist’s output “corresponds to national mentality, values and customs.” For a license holder not to lose points, he or she must refrain from “offending the feelings” of the audience.

The new rules, which came into force on January 1, were a reaction to a perceived mood of licentiousness in recent musical output. “Shortcomings have led to crude violations during concert and broadcast events and ethically inappropriate behavior by pop singers,” the government decree explained.

Now former Culture and Sports Minister Minghojiddin Hodjimatov, who spearheaded the turn to conservatism in the performing arts, suggested some safe areas for entertainers. “Other than focusing on love, they should sing about daily life, epochal events occurring in our country and about things that reflect the spirituality of the Uzbek people,” Hodjimatov said last summer.

Uzbeknavo issues licenses for a five-year period and charges a $4,000 annual fee.

As it happens, Yuldasheva was stripped of her license last summer because of the Konikmadim video, which had her and Ganiyeva huskily exchanging lyrics like “why does the heart yearn for you” and “let me feel your love.”

Yuldasheva defended herself from criticism by arguing that the song was simply about love and female solidarity.

“I wrote it for myself. And when Rayhon suggested we sing together, I thought that in this song we could excellently blend our different energies,” she said.

Yuldasheva got her performing license back in December.

There was another wave of moral outrage earlier this year when footage surfaced on the Telegram messaging app of popular singer Tamila apparently exposing her rear.

Uzbeknavo duly deprived Tamila — her real name is Esmeralda Rakhmatova — of her right to perform, arguing that the singer had violated the terms of her license.

It is altogether possible that the fortunes of more sexually overt pop performers took a turn for the worse following the dramatic downfall of Gulnara Karimova, the eldest daughter of President Islam Karimov. Before she was embroiled in a corruption scandal and placed under house arrest in 2014, Karimova attempted to carve out a career as a pop diva, singing under the stage name Googoosha. Perhaps the highlight of her largely unremarkable stint as a songstress was a duet with Julio Iglesias, a remake of ‘Besame Mucho.’

Although morality is very much on the agenda at the moment, authorities are also inevitably as preoccupied by pop stars dabbling with politics.

In 2013, pop star Jasur Umirov reportedly lost his performing license for refusing to perform as part of the annual mobilization campaign for the cotton-picking season.

Failure to be sufficiently patriotic is also grounds for punishment.

At the start of May, pop singer Abdulaziz Karimov hit the headlines when he lost his title as “Honored Artist of Uzbekistan.” The designation is a holdover from the Soviet Union and grants the holder substantial public status, as well as access to special state benefits.

Karimov’s demotion was a reprisal for the singer adopting Turkish citizenship. The entertainer moved to Turkey last spring in frustration at his inability to get gigs on Uzbek radio and television. Within 10 months, he was granted a Turkish passport.

“I was so happy when on March 29 I received an email of congratulations from (then) Prime Minister Ahmet Davutoglu,” he told Ferghana.ru in an interview.

Uzbek Prime Minister Shavkat Mirziyoyev condemned Karimov as a “traitor of the homeland.” State media spoke of Turkey’s “stab in the back” — language that mimicked Russia’s reaction to one of its fighter jets being shot down by the Turkish air force on the Syrian border in November.

One theory doing the rounds was that Ankara was taking a measure of revenge for Uzbekistan’s multi-year drive to squeeze Turkish soap operas off its airwaves.

In 2011, the government pressed rappers to avoid offensive content and instead think about dwelling more on themes of patriotism, loyalty and love for one’s family.

Only the most popular entertainers in Uzbekistan are big enough to draw concert-sized crowds. For most people in the business, it is mainly about weddings and other big parties, so loss of a license can be a particularly hard blow.

Demographics explain why authorities are so anxious that pop musicians tow the party line. According to official statistics, more than half the population is in the 15-to-30 age range — precisely the demographic group to which modern pop music mostly appeals.

The government appears to be swimming against the tide and defying the wide appeal of modern acts. “Youths today prefer modern Uzbek and Russian pop, which you hear all over the place on cable and satellite television channels,” journalist Nodir Muhammedov told EurasiaNet.org.