Mirziyoyev says businessmen can pay money to people themselves. 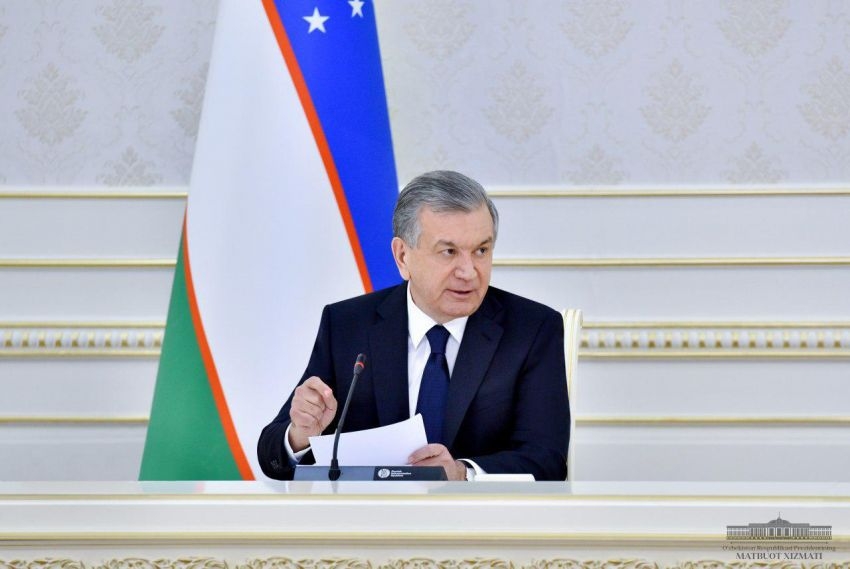 It's not about the money money money: Shavkat Mirziyoyev seen at a recent government meeting. (Photo: Presidential website)

The president of Uzbekistan has abandoned the idea of the government pumping money directly into the economy to help the country out of the current coronavirus-induced crisis and has turned instead to the business community to support the needy and unemployed.

“The country has sufficient reserves to support the population and the economy. There would be no easier way than to just give money to the public,” Shavkat Mirziyoyev said in televised remarks on April 20. “But no economist can predict the consequences of this. Moreover, there is a high probability that this would increase corruption.”

Mirziyoyev suggested instead that the unemployment and hardship caused by the ongoing situation could be addressed by a nationwide movement he dubbed “Kindness and Solidarity.”

The president’s proposal is for one businessman, say, to provide financial support to 10 families, and for another to provide jobs to people in 20 needy families. The state would then provide tax breaks, discounts on leases and easy credit to those companies involved.

The idea has met some hostility online.

“I would suggest the president, the prime minister, ministers and mayors become the main sponsors of this Kindness and Solidarity initiative,” wrote one Facebook user, Turgunbay Nurmetov.

Oksana Petrova wrote on her page: “What the hell do we need this government for? When things become hard, they ask for help from the people, just to provide help among themselves.”

Harsh open criticism of presidential pronouncements is still something of a rare sight in Uzbekistan.

Only two days before Mirziyoyev made his remarks, Economic Development and Poverty Reduction Minister Jamshid Kuchkarov had seemed to raise the prospect that direct cash payments were on the cards and that this could prove an effective way of stimulating the economy.

In an interview to the Kun.uz website, economist Behzod Khoshimov supported the idea of “helicopter money.”

“When the quarantine is over, people will have no money. If people have no money, they cannot buy anything. And this means that there will be less retail,” Khoshimov said. “If the government supports the public with money, it will be like making a charcoal blaze. If you wait some time, charcoal may flare up [on its own], but with hard cash you will make it blaze faster.”

The International Monetary Fund earlier this month revised its gross domestic product growth forecast for Uzbekistan down to 1.6 percent from its previous 6 percent figure.

Early indicators from Tashkent are confirming pessimism about the slowdown in economic activity. The State Statistics Committee reported on April 21 that Uzbekistan’s foreign trade turnover in the period from January to March had reached $8.14 billion, which represents a decrease of $924 million on the previous year.

The bulk of trading is done with Russia and China, which account for 16.9 percent and 16.8 percent of overall trade turnover, respectively. Although the margin between those countries is small, it is notable that Russia has overtaken China as Uzbekistan’s main trading partner for the first time since 2016. Since Russia is still battling its own coronavirus outbreak and China is already busily restarting its economy, it is likely that change of place may be short-lived, however.

The Uzbek government is looking for lifelines anywhere it can find them.

On April 16, the Employment and Labor Relations Ministry issued a statement appealing to the Cotton Campaign, a coalition of rights groups focusing on forced labor, to lift its global boycott on Uzbek cotton exports. Thanks to the boycott campaign’s efforts, more than 300 brands and retailers have declined to source Uzbek cotton. Uzbek officials argue that the government has successfully shown commitment to stamping out forced labor and that the end of the boycott would provide much-needed relief to a struggling population.

“Lifting of the cotton boycott is one of the few measures that could quickly generate much-needed jobs and support the economic wellbeing of Uzbeks during the COVID-19 crisis,” the Employment and Labor Relations Ministry said in its statement. “Textile production alone employs 200,000 workers in Uzbekistan; their wages support the livelihoods of 1 million people.”

The appeal met resistance, however.

“We recognize and are heartened by the progress that Uzbekistan has made toward ending forced labor,” Nate Herman, senior vice president for policy at the American Apparel & Footwear Association, said in a Cotton Campaign response statement. “However, given brands’ zero tolerance policies on forced labor, anti-slavery legal requirements, and the [International Labor Organization’s] findings that more than 100,000 cotton pickers worked under forced labor conditions in 2019, brands need additional assurances of worker protections.”

Mirziyoyev’s televised appeal came against the backdrop of turbulence with the Uzbek sum. In early April, Uzbek banks were selling the national currency at 9,700 to the dollar, but by April 22 the sum had fallen to around 10,150.

Due to the demand for hard currency, banks have begun limiting how much it will pay out in dollars and euros. In another attempt to prop up the exchange rate, the Central Bank said it has imported $200 million from U.S. Federal Reserve System.