Mirziyoyev says he may hand prosecutors' powers to Justice Ministry. 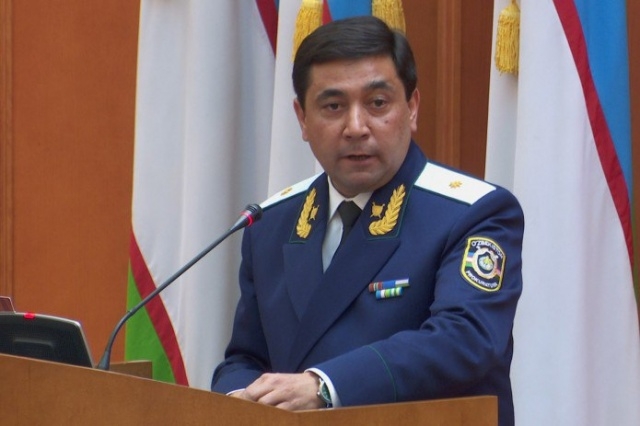 Out with the old, out with the new too: General Prosecutor Otabek Murodov. (Photo: Uzbekistan government website)

Uzbekistan’s president has lambasted the country’s prosecutors and reportedly revealed that the freshly fired General Prosecutor is facing corruption charges.

Shavkat Mirziyoyev’s remarks constitute a fresh assault on a little-liked and historically powerful and much-feared government body and signals his intent to again attempt to radically shake up the justice system.

“If things carry on this way, I intend to curtail and streamline the procuracy. More authority will be handed to the Justice Ministry,” Mirziyoyev told the Senate on June 21.

A day earlier, the president’s office issued a perfunctory statement to announce the dismissal of General Prosecutor Otabek Murodov, who had been in the job since last January. The statement provided no details as to why Murodov was being fired.

But news website Kun.uz cited Mirziyoyev as telling Senators that Murodov is facing charges of bribe-taking.

The president thundered at what he described as a chronic problem of bribe-taking in the prosecutor’s office.

“As soon as you give them a job, they change,” he said, referring to leadership in the General Prosecutor’s Office. “They have taken bribes of $50,000-100,000 from provincial prosecutors and governors. All tax officials and prosecutors are bribe-takers. I know this well.”

Corruption at all levels of government is perceived as being a primary hindrance toward the development of a robust small and medium private sector in Uzbekistan. While businesspeople were once shy about complaining of prosecutorial abuse, they have in recent years become more confident in voicing their frustrations. The tenor of Mirziyoyev’s outburst indicates he was channelling that unhappiness.

Murodov has been replaced by trusted loyalist and former Senate speaker Nigmatilla Yuldashev. When the death of the late President Islam Karimov was announced in September 2016, it was Yuldashev that should under the terms of the constitution have been installed as caretaker president until a special election could be held. In the event, he deferred to Mirziyoyev, who was then the prime minister, without a peep.

If reports of investigations against him are confirmed, Murodov will become yet another in a growing line of ex-general prosecutors being subjected to prosecution.

And then, last week, the General Prosecutor’s Office revealed, confirming long-standing suspicions, that Ikhtiyor Abdullayev – Kadyrov’s successor and Murodov’s predecessor – had been arrested on suspicion of abuse of office and corruption. Abdullayev was removed from his post as head of the State Security Service in February. Officials said that Abdullayev was stepping down on health grounds, although it was being reported at the time that he was facing investigation.

Mirziyoyev has already been implementing major cutbacks in the procuracy. In mid-March, he issued a decree to fire almost 1,200 staff members. Several hundred were to be reappointed to the tax inspectorate, while another 87 were ordered to join a state body tasked with protecting the interests of the business community.

These latest moves against prosecutors are only a further confirmation of the long-standing disdain with which Mirziyoyev has regarded their office. In a recording of a speech to government officials in August 2017, the president described prosecutors as “huge thieves” left over from “the old garbage system.”

While wielding the knout, the president’s office has also sought to place a considerable emphasis on revamping the General Prosecutor's Office through education.

In a May 2018 decree, Mirziyoyev approved the creation of an academy in which all aspiring prosecutors would have to study for hundreds of hours before they could take up a position. Employees of the prosecutor's office are required to undergo fresh training every three years.