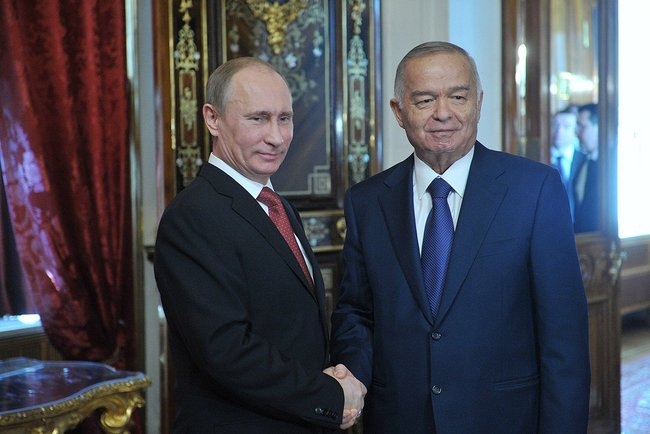 Amid ongoing rumors about his frail health, Uzbekistan President Islam Karimov popped up in Moscow today, where he publicly glossed over strained ties with his Russian counterpart, Vladimir Putin. The fight against terrorism and the pullout of NATO troops from Afghanistan topped the two leaders’ agenda, according to the Kremlin's press service.

Tashkent withdrew from the Moscow-led Collective Security Treaty Organization last summer for the second time. Since then, Moscow's promises of military aid to Uzbekistan’s regional rivals – Kyrgyzstan and Tajikistan – and its pledges of support and investment for grand hydropower projects in those upstream countries have vexed Tashkent. Meanwhile, Washington's promises to gift Tashkent some Afghanistan leftovers in return for facilitating the pullout have alarmed Moscow.

Yet whatever was said about these delicate topics behind the Kremlin’s closed doors, it was all smiles following the April 15 talks. Praising economic and humanitarian collaboration, Putin told journalists that security cooperation in light of the NATO pullout from Afghanistan was paramount to bilateral relations.

We have, of course, discussed the situation in Central Asia in detail and talked about problems associated with the pullout of international coalition forces from Afghanistan in 2014. We have agreed to continue to follow this topic attentively and to coordinate possible joint steps. By this we mean providing necessary assistance to the Afghan leadership regarding the stabilization of the military and political situation and the fight against drug trafficking, terrorism and extremism. […] I stress: Close interaction with Tashkent on a wide range of aspects will be continued.

It is hard to overestimate the role and place of Russia in solving topical and acute problems in the modern world: Preserving a strategic balance of forces in the world, nonproliferation of nuclear weapons, energy security, countering terrorism, extremism, drug trafficking and other threats. Russia's presence in Central Asia, in our earnest conviction, is an important factor of strengthening peace and stability, preventing creeping (I am using this word 'creeping,' thinking about very great meaning and sense of this issue) expansion of extremism and radicalism in the region, and not only in our region. Radicalism is growing all over the world.

Karimov went on to describe the dangers at length, stressing that religious extremism and terrorism could be “far worse than open war.”

The two sides signed four treaties, including agreements on readmission – that is, facilitating the expulsion of third-country nationals – and on monitoring financial flows, according to the Kremlin’s press service.